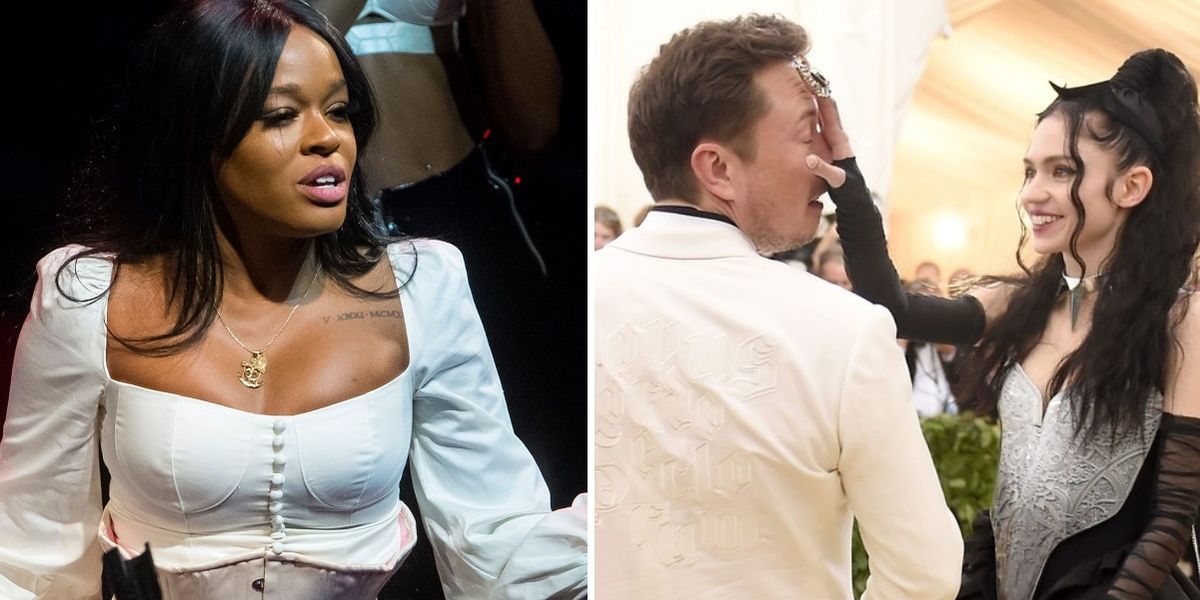 Azealia Banks is not a reliable source of information.

The “212” rapper has engaged in countless social media feuds with everyone from Rihanna to Sia to Disney Channel star Skai Jackson (who was 14 at the time…). She has claimed to perform animal sacrifices as part of witchcraft rituals, once labelled Lizzo a “millennial mammy,” and has been kicked off Twitter more than once for spouting homophobic slurs. She defended Donald Trump’s “Muslim ban” and told him she is “proud as f***” of him as a fellow Gemini for winning the 2016 election, but later called him “a f***ing idiot” and “disqualified” him from his Gemini status.

Whether it’s a deliberate effort to court controversy or a fundamental aspect of her personality that propels her into this kind of mess, Banks seems to spend a lot more time and energy on this kind of drama than she ever did on her music — and her career has not exactly thrived as a result.

Enter dream pop musician Grimes and her then-boyfriend (now baby daddy), Tesla CEO Elon Musk. In 2018 the two were apparently pursuing a collaboration with the Harlem-based rapper. At that time Musk had yet to release his single “Don’t Doubt Your Vibe,” but was — qccording to Banks’ retelling of events — a big fan of Banks’ song “Anna Wintour” and thought that Banks’ was “hot.” She was lured to visit Musk and Grimes in August of 2017 “on the premise that we would hang and make music.”

While Elon Musk later claimed to never have met Banks or communicated with her in any way, it was confirmed that Banks did spend some time at one of his properties — and it happened to be around the same time that Musk was handling the fallout from an unfortunate tweet about considering an offer to take Tesla private at a price of $420/share. That mess is the crux of what makes Banks’ claims so compelling. According to her, Grimes spent the weekend tending to Musk and ignoring Banks because Musk was “too stupid to know not to go on Twitter while on acid” and was “scrounging up investors.”

Once again, Musk and Tesla have denied the suggestion that there was any drug use involved in the incident, and considering the fact that the claim comes from an Instagram tirade in which Banks referred to Grimes as a “dirty-sneaker-inbred-out of the woods-Pabst beer, p**** m***head junkie,” it’s probably a good idea to take the accusation with a grain of salt.

So, why can’t I stop thinking about it?

For a start, mixed in with her slanderous, offensive, and sometimes hilarious insults (“There’s something not quite right about that man. I wouldn’t give the credit of calling him an alien. He’s a mutant”), Banks includes some real information about Musk’s hair plugs and the disturbing source of his family’s wealth in the African mining industry. More to the point though… There’s just something that makes so much sense about the idea of Elon Musk tweeting on acid.

How many tech “visionaries” have convinced themselves that they achieve some kind of enlightened state through the use of psychedelics — all while ignoring the suffering of their workers? Musk is a man who believes we live in a simulation. A man who bonded with his experimental musician girlfriend over an obscure joke about 18th century art and a thought experiment about a malevolent AI.

His paranoia and overly-sensitive ego has driven him to (allegedly) swat a former employee and to label a rescue worker “pedo guy.” He decided to sell all his worldly possessions in a lame attempt to stop bashing him for being a billionaire. He named his son after an airplane that is similar to his favorite airplane… and then switched it to roman numerals (X Ӕ A-Xii). In what world is that not someone who is constantly on large doses of psychoactive compounds?

Eventually Azealia Banks was subpoenaed in connection with a fraud case that Musk’s “$420” tweet spawned, but Musk and Tesla settled the issue for $40 million, depriving us of Banks’ official testimony. But in my heart of hearts I know that Elon Musk just cannot stop tweeting on acid.