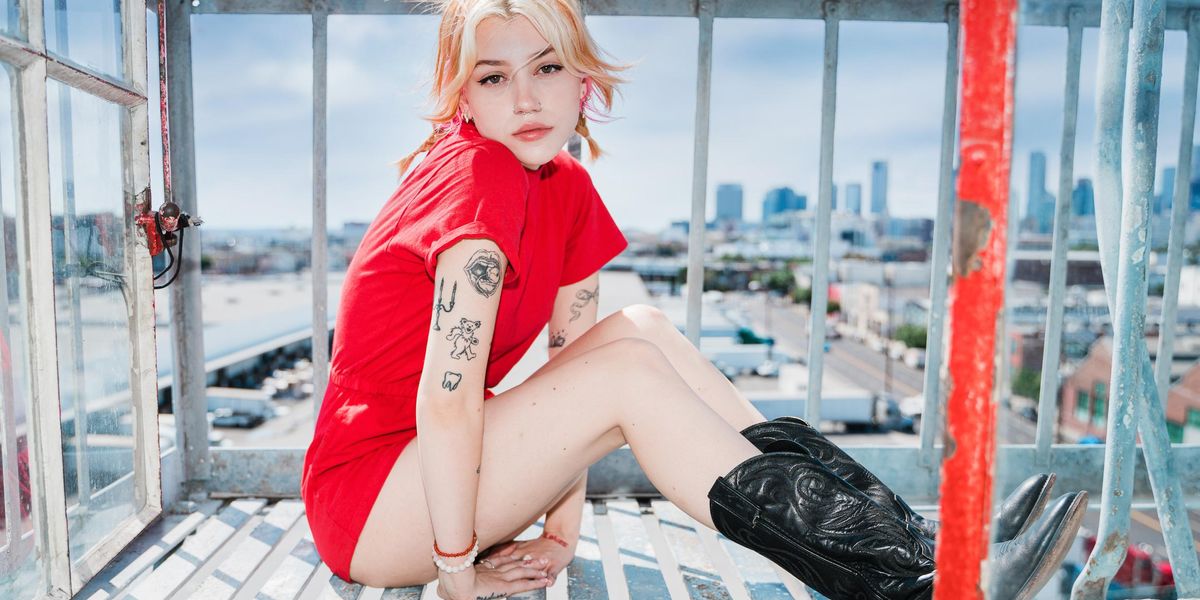 After more than four years of releasing music, Kailee Morgue is set to drop her debut album Girl Next Door tomorrow (10/28).

Initially signed to Republic, she's now on LA-based Thriller Records. The new label has given Morgue more creative control, which comes across in both the music and aesthetics. You can tell she's having fun shifting between characters and eras. The cover art for "End of My Life" pays homage to '80s slasher flicks while "Queen Bitch" is inspired by Y2K-era teen movies.

Musically, Morgue has evolved considerably. The atmospheric pop of 2018's Medusa EP gave way to a mall punk sound heard on singles like 2020s "This is Why I'm Hot." Throughout Girl Next Door, she mixes grungier production and radio-friendly hooks to create an eclectic pop-rock sound with riot grrrl roots.

We met up with Morgue in downtown Los Angeles to talk about Girl Next Door and some of the songs that inspired her.

How does it feel to finally be releasing your debut album?
It’s so nerve-racking but cathartic at the same time, since it’s been in the works for so long! I’m excited to finally share a full length project and start performing the new tracks live!

Let’s acknowledge that cover. Where did the idea come from, and who’s responsible for the makeup?
The special effects makeup in the cover was inspired by Buffy the Vampire Slayer. I really wanted my album cover to not be focused on a beauty shot or just me standing there in a cute outfit. The album title actually came after I conceptualized it because it seemed funny and ironic to be portraying myself as this totally unconventional girl next door. The makeup was by the very talented @zombiee_bunnie on Instagram!

I’m always interested in how the songs were written and chosen. Were all the tracks written recently, or were there older songs that you’ve been reshaping?
Some of the tracks on the album were written nearly three years ago like "Loser," and then some of them were written less than six months ago like "Good Day To Be My Dealer." It was more about choosing songs that fit the message I was going for of struggling to find myself in LA.

I like that your take on pop punk is a little grungier, a little more abrasive than what other artists are doing. There’s a little bit of The Breeders and Sleater-Kinney in there. How did you work with producers to get that sound?
I was actually very adamant with this project that we stay away from classic pop punk so instead of referencing Blink-182 and Good Charlotte like I had in the past, we were referencing Hole and Liz Phair for a little bit of that grunge hyper femme feel! I’ve found pop punk is a bit cleaner, and I wanted some of these tracks to feel like they were more organic and dirty.

Was it difficult to show people “Good Day to Be My Dealer?” It’s a pretty personal song.
It was surprisingly easy to share that song with people because it was so upbeat and fun. I think you almost forget it’s a bit sad and personal. I wanted it to be something people can find uplifting in a "life is a mess but who cares" kind of way. I think the importance of wanting to share that message masks any fear I have of talking about deeply personal things!

When you first got into YouTube, was the goal to get discovered, or were you just having fun?
I actually got discovered on Twitter, so I was pretty much just copying and pasting all my videos to each platform and doing covers for fun. I was usually choosing songs I really loved that weren’t necessarily that popular, but it felt like scratching an itch to play songs that were stuck in my head constantly.

I feel like a lot of your songs would sound good on a soundtrack. Do movies and TV shows influence your songwriting?
Movies and TV shows didn’t inspire my music until the pandemic hit. I would say I was pretty ignorant to the film world and I had a lot of time to catch up on the classics I’d never seen. I dove into every genre and era going as far back as the 1940s. I didn’t realize how much you can incorporate film and other interests into music! That’s why this rollout doesn’t box itself in to one aesthetic to me. I just wanted to do things I loved and thought were cool like the "End of My Life" video. I'm so glad I got the chance to explore those things!

What was your experience going from Republic to Thriller like? Changing labels is something a lot of artists have to go through at some point.
I was really scared coming off of a major label so quickly. I wasn’t sure if I would find a new path or figure it out, but I was lucky to get connected with Thriller! They really let me explore so many of my weird ideas and just try new things. I think coming out of a very structured system was a blessing in disguise for me!

I love how versatile your style is. You can go from the 1960s to Y2K and everything looks amazing. How do you put together your looks?
My style changes day to day with how I feel and what I want to project that day. When I started this album, I was very much in my Alanis Morissette '90s normcore headspace where I wanted to let the music do the talking and keep it simple! As time went on, I got more into '60s and '70s pieces but as you know, I couldn’t replace my entire wardrobe. So you’ll see me sometimes more Y2k or '90s and sometimes '60s while I’m pinning down what it is I like!