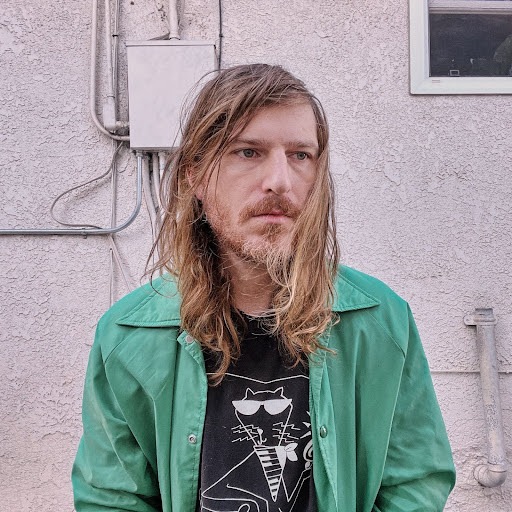 A couple weeks back, Tera Melos frontman Nick Reinhart announced a new album as Disheveled Cuss, Into The Couch, the follow-up to his 2020 solo debut. He shared “Creep A Little Closer” at the time, and today the Sacramento musician is back with another one, the swirlingly eerie “Remote Viewer.”

It was inspired by the early ’00s internet artifact Notpron, a creepy and frustrating online puzzle game that somehow still exists and I haven’t thought about in decades. Reinhart and his friend made a concerted effort to solve every single level of the puzzle during the pandemic — he goes into all the details in a statement. Listen to “Remote Viewer” and check that out below.

remote viewer is a song about an online puzzle called “notpron,” which claims itself to be “the hardest riddle available on the internet.” it was created in 2004 by a german guy named david munnich. my friend stefan and i started playing it in 2007 after randomly stumbling upon it. the riddle is made up of 140 levels. each level is represented by a webpage, and the goal is to get to the next level by solving the page- either by finding a username + password or by altering the url address. there’s a heavy emphasis on no cheating, which the game takes precautions to prevent. there are hints hidden all over the place, including in the deepest lines of page’s source code. the atmosphere throughout the site is a lot of unsettling weirdness filtered through the mind of a 2000s era computer nerd. when we started playing it no one had completed the puzzle, despite thousands of attempts. most players drop out before level 10. by 2009 stefan and i had gotten all the way up to level 76 with on and off playing. then we got stuck for a couple years. by the mid 2010s the puzzle had grown in popularity and the site had logged millions of player attempts. 31 people had solved it by 2014. we would continue to play here and there with little bursts of momentum but then ultimately get completely stuck and step back for awhile.

when the pandemic hit and we were quarantined we decided to start playing again consistently. starting in april 2020 we’d video call everyday (stefan lives in texas) and grind the riddle for hours. sometimes we’d spend multiple days just staring at our screens fully deadlocked with no ideas and then there were periods where we’d blast through multiple levels in an afternoon session. we picked up a lot of momentum and by june we reached the final level- “level nu (real).” at that point there had been 78 solvers. up until then each level was solved using all sorts of practical methods, stuff like- outside the box problem solving, html programming knowledge, learning new software, complex detective work etc. we’d heard that level 140 was something different.

turns out the final level of the hardest riddle on the internet was about remote viewing. remote viewing is “the practice of seeking impressions about a distant or unseen subject, purportedly sensing with the mind.” each person that reached level nu was to contact the notpron creator, david m, and you’d receive a random twelve digit number that corresponded to a target image that only david knew. it was your job to determine what the image was through remote viewing- no guessing, no researching, no brute forcing- just straight up remote viewing, and you get as many solve attempts as you need. the solve didn’t need to be precise, but within reason, as determined by david m. so if the assigned image was, for instance, a sailboat, and you submitted a drawing of a triangle and the word “wet” then you would likely have passed. if the image was a tiger and you wrote down “orange jungle,” that’s probably a pass. yes- after 13 years of grinding this brilliant puzzle built on logic and knowledge the final level was a fucking guessing game.

while david m endorses playing most of notpron with a partner, when you get to level nu you’re stranded on an island, all by yourself. so stefan and i got our number assignments and started our “remote viewing” attempts. incredibly, several of the previous 78 solvers got the answer on their first submission. i suppose the mystery and intrigue of remote viewing the final answer of a decade long riddle was very exciting for some, but it was a massive fucking eye roll for us. and even with our eyes rolled all the way into the back of our heads, stefan solved level nu on his first try. 79th person to complete notpron. we were shook. i got to work and forced myself to buy into this bullshit. i meditated on my number. i’d stare at it and let my mind go. jotting down whatever my subconscious put forth into my conscious mind. after a few days i submitted my answer. denied, try again. ok. more thinking, more mind shut down. submit again- nope. by the end of june there had already been an additional 4 solvers, which was extremely discouraging. how were people solving this thing rapid fire?

finally, after my 4th submission, which was yet another failure, i decided to reclaim my own destiny and said fuck this and walked away for good. level nu felt like such a betrayal of the last 13 years of riddle solving. by october 2020 there had been 100 solvers. 100 people that got lucky and guessed their way to the end. i mean, i just do not believe in remote viewing. apparently there were enough people that felt the same way because after 100 official solves level nu was removed from the game and a sanctioned decision was made that if you reached level nu, you solved notpron. a very anticlimactic ending to a long journey, but an ending nonetheless

the song features eric gardner on drums and billy mohler on upright bass. at the beginning of the song stefan’s voice can be heard in a voice memo he sent me.