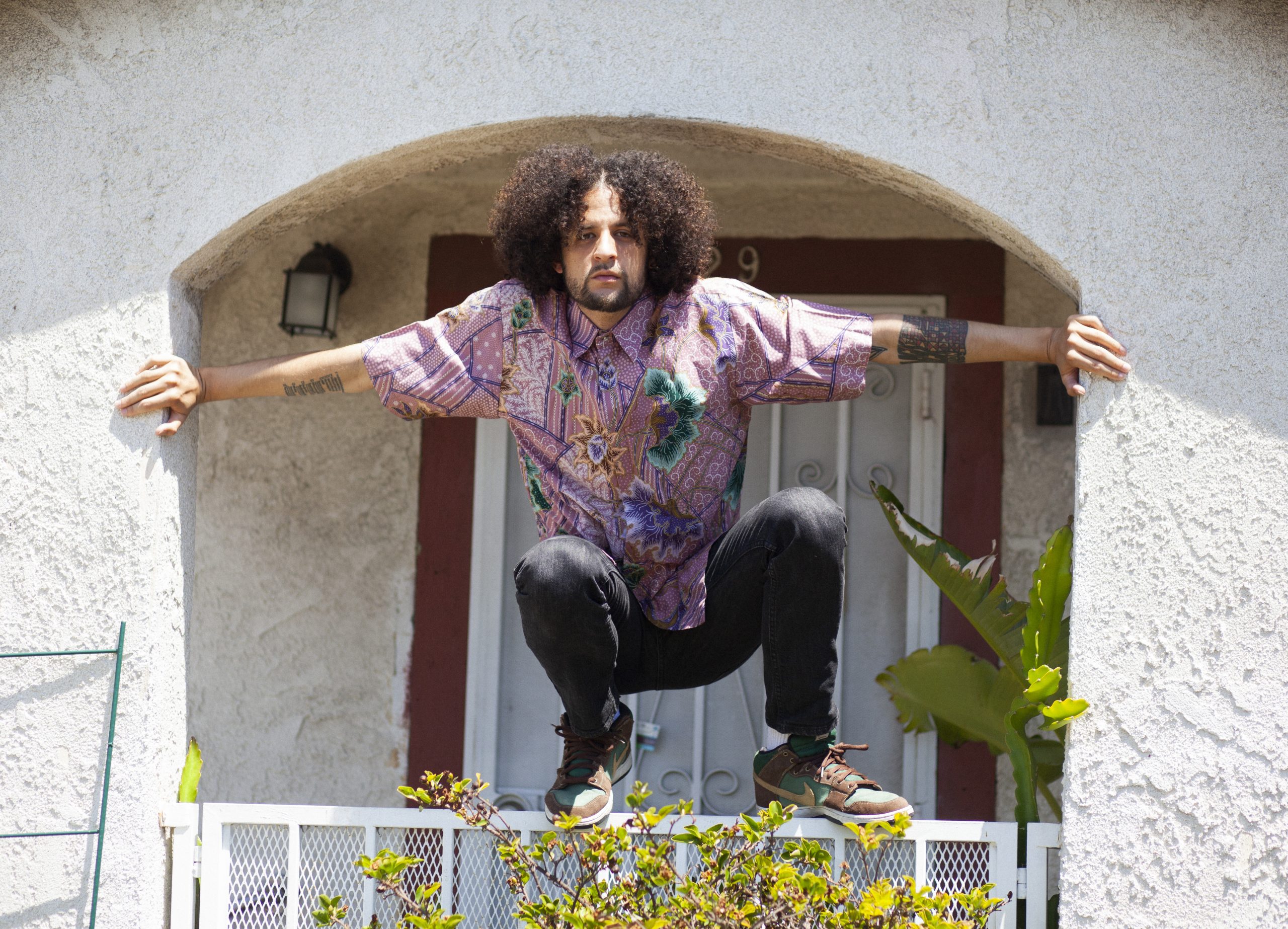 Whereas most rappers who aspire to the zeitgeist might aim for their own McDonalds meal or a placement on an animated movie soundtrack, the LA-based multi-hyphenate had been out here writing dissertations and fictional short stories to accompany his literary-minded beat poetry. On any of his past releases, you might find Langston interrogating the forms and functions of hip-hop in the liner notes or adding to the canon of his own fantastical and unruly self-mythology, using these devices to emphasize the high-concept witticisms of tracks with probing names like “Aggressively Ethnically Ambiguous.” All of this could suggest music that is unnecessarily dense or academic, a perception that over time began to wear Langston down.

In response, he released last year Stalin Bollywood, a propulsive and confrontational lark. Across a blitzkrieg eight tracks, Langston applied a post-punk veneer to underscore sardonic rallying cries like “the pope is an unrepentant rapist” and “I’m cleaning up after dirty white boys.” “It was very reactionary on my end,” the rapper explained to me over Zoom last week. “I felt like there was this notion that I was a lyricist too alternative for my own good, who could never say anything directly. Like, ‘What is he saying? It’s so many words.’ And I was just like, fuck that, I’m gonna say some shit outright.”

Stalin Bollywood was billed as portraying “civil discourse, indeed discourse as a whole, in a total breakdown.” But contemporary society has been in the midst of that decay for years now, and neither Twitter nor cable news has ever produced a riot this engrossing. As a master of ceremonies, Langston is less edgelord than Ham On Rye – righteous and reckless, but not without cause, and always grounding his attacks in lived experience. Like Das Racist before him, Langston strikes an irreverent tone that even at its most obtuse can’t help but be clever.

The reality is that the criticisms lobbied against Langston’s artier tendencies have always been unfounded. Since his debut project Full Frontal Incumbent, An Incongruous Mixtape, he has managed to strike an ideal balance, delivering his vibrant satire without compromising the immediacy of his flow. His songs sound expensive without needing to name drop luxury brands or drop money on big-name features; instead, Langston tightly coils together $20 words into electrically charged anthems against class discrimination, hypocritical politics, and other issues du jour that sit at the center of his black Jewish identity.

The child of two working actors, Langston grew up in the Los Angeles neighborhood of Leimert Park. He cites as musical influences touchstones from his SoCal childhood, from Snoop Dogg to the Pharcyde to Freestyle Fellowship. The latter, discovered via a mix CD from a high school girlfriend, “activated this anything-goes approach to rap.” He felt inspired to begin writing in college, but was quickly dissatisfied trying to follow others’ footsteps as a developing artist.

“I got into producing because I didn’t wanna rip beats from YouTube,” Langston says. “A lot of what people were producing around me felt stilted and very genre-specific.” Inspired equally by rock and electronic music as rap, Langston challenged himself to better capture his musical references in his instrumentals, which has led to the vast spectrum of styles that have since decorated his discography.

Whether riding Stalin Bollywood’s prog-rock shuffles or zoning out over the trap beats of the prior year’s linguistically drunk Language Arts Unit, Langston has continuously demonstrated mastery over a range of techniques and a willingness to push boundaries. His proclivity for highbrow hijinks has positioned him as a golden disciple of the irony-rap mystics forged from Project Blowed and the Hellfyre Club, such as Open Mike Eagle, R.A.P. Ferreira, and Busdriver. In the next chapter of his absurdist auto-fiction — Grapefruit Radio, out today — he continues to deepen his stature in that lane while offering the biggest shakeup yet in his always unpredictable career.

A full-service creative system, Langston has typically produced and mixed his own music, designed their album covers, and written the accompanying press materials. But Grapefruit Radio marks a notable departure from this vertical integration, finding the rapper forgoing nearly all of the beat-making responsibilities and bringing in features from across his corner of the indie-rap diaspora. For an artist who exercises as much executive control as Langston, it was a valuable lesson in doing less, leaning more on instinct than premeditated vision.

He describes Grapefruit Radio as a happy accident, a surprise album for himself. “I was working on this really laborious thing, a very emotional and melodic project that is really intense in terms of me expanding my musical repertoire,” Langston says. Taking a break to put out a call for beats on Twitter, he soon found himself with several looser instrumentals to play with, which resulted in some of his most seamless rap acrobatics to date.

The first was Grapefruit Radio’s animated closer, “I Will Stop At Nothing (I Am Magnetized And I Move!)“, followed by collaborations with like-minded eccentrics like Fatboi Sharif and the Koreatown Oddity that would become the record’s first two singles. Before long, he recognized that these seemingly random tracks belong together in a sequence. “I realized, Oh, this might actually be a thing,” Langston shared. “This maybe deserves a little bit of my focus.”

Working on the album proved a respite, a low-stakes exercise in “simplifying my musical approach.” Part of that was the result of hearing himself on others’ production. “There’s a separation that you inherently get working over someone else’s compositions,” Langston says. “You don’t hear every little detail, and that allows for an ease that I think this project has. A little less overthinking.”

That relative effortlessness comes through in the album’s mix, which this time largely filters Langston’s proclivities for mockery and mischief through the dusty soul of modern loop-rap classics, like FlySiifu’s or Quelle Chris’ recent Deathfame. On “Blacksmith Django With All The Fingers,” Langston leans on his Muckraker Jones alias for a slanted exposition over a gilded guitar motif that wouldn’t sound out of place on a Roc Marciano tape. He spills his quill ink all over various shades of boom bap, from the psychedelic ether of “Progessive House, Conservative Ligature” to the discordant brass-inflected bounce of posse-cut “DJ Khaled Muff Diving.”

My personal favorite is “Pharmacology In Front Effects,” on which Langston echoes the more plaintive meditations of Navy Blue and Akai Solo. Still, you’d be hard pressed to find a couplet from those artists as phonetically delicious as “This is a fraction of a penny per stream/ As avant-garde before antitrust/ Cloud sound as fermented fish/ In nordic playlist cigarette butts puffed.”

At times, Langston’s satirical voice can feel impenetrable, yet he is the first to insist that the album is best received without overanalysis. For those who lean in, there’s endless quotables and internal logic to string together into something both coherent and exhilarating. But at its best, Grapefruit Radio keeps itself at arm’s length, where never quite having the full picture makes the resulting blur all the more transfixing.

As he did with Language Arts Unit, Langston has concocted some additional reading material for those listeners who do wish to go deeper. The Grapefruit Radio Operators Manual is 85 pages of, among other chapters, lyric sheets (cleverly referred to as “Diagnostic Exercises”), “Frequently Asked Questions” (e.g. “If my variety of Grapefruit Radio has active speakers, can I operate it with the passive voice?”), and a list of circumstances that would void the warranty, such as “asking for too many clarifications” and “holding an ongoing hostility to mystery.”

The manual builds upon Langston’s existing lore – with appearances from familiar characters like the venerated Lord Chocolate Davis – while also helping to diversify his offerings to fans. “At the end of the day, I think a more cynical way to see it is just as content, you know? Keeping people interested so that they’ll eventually stream it on Spotify,” Langston muses. “Logistically, that’s important. I mean, personally I’m as addicted to media as everyone else is. But I think these written pieces are my way of providing content that’s a little bit more earnest, and presenting a different vision of what I think multimedia could be.”

In the future, Langston envisions himself stepping into the figure of an artist like Saul Williams or Flying Lotus, “where if I decide to not do music as a focus for a project and I just wanna do a book or something that’s visual, that it’s still genuinely coming from me. And you’re interested in the idea, whatever form it takes.”

With his diversity of skills and unbound ambitions, it’s not hard to imagine Langston finding his way into filmmaking or authoring full-blown novels in the near future. In the meantime, he’s currently working on two more albums: the aforementioned ultra-personal release that was initially going to follow Stalin Bollywood, and a duo tape with labelmates Pioneer 11 where Langston dips his toes into singing and draws from a childhood love for Portishead and Massive Attack. There’s little doubt in his mind that with his constant left-turns he’ll continue to confuse folks, but he’s made peace with having said his piece.

“If there is any remnant of me still thinking about how I’m perceived, I think there are enough shades of me out now,” he reasons. There’s no longer an internal backlash to set the record straight. “I’m very comfortable where I’m like, so you don’t understand yet? That’s cool.” If you aren’t hip to Rhys Langston by now, that’s your problem.

Grapefruit Radio is out now on P.O.W. Recordings.