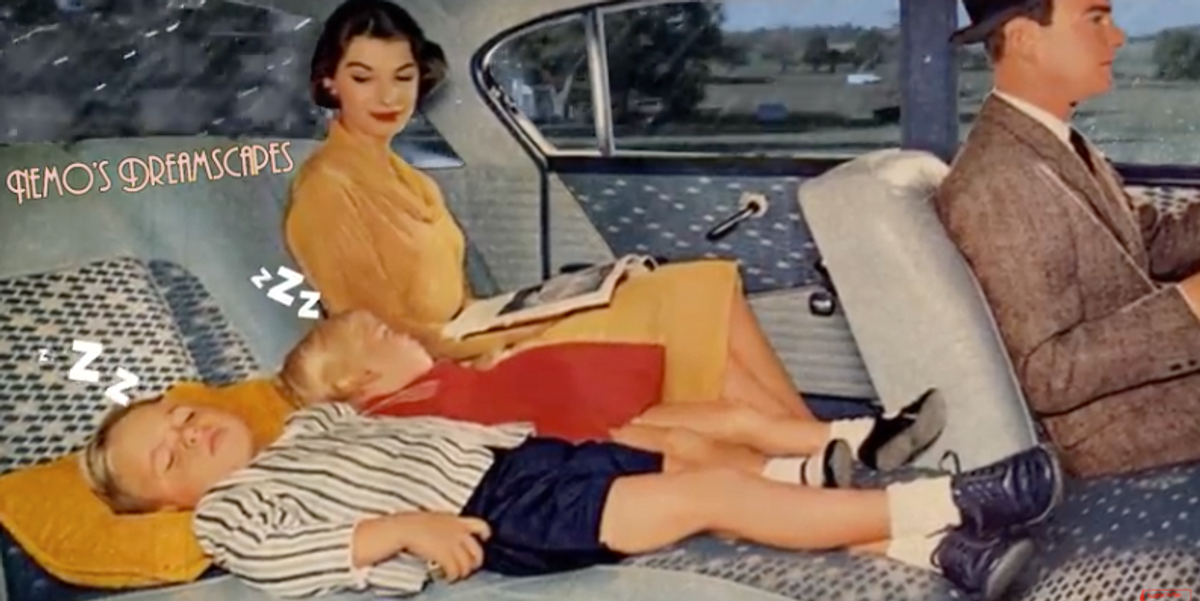 Ah, playlists. They’ve always been ways to communicate unsayable feelings and to transmit us to different, sometimes extremely specific times and places.

But lately my YouTube and Spotify recommendations have been filled to the brim with extremely specific yet somehow universal playlists. Though they all seem to express a variety of different experiences, most are escapist and some are definitely weirder than others.

Welcome to the world of aesthetic playlists.

It’s technically difficult to separate these playlists from other playlists — yet those who know, know: They have their own specific language. Born of TikTok, brought to life thanks to the YouTube, Spotify, Souncloud and streaming algorithms that have allowed new generations to take in and re-mix countless hours of music, the playlists are at once stunningly creative and very unnerving, reliant on odd tropes and escapist fantasies that are both cynical and wide-eyed.

It’s hard to tell what playlist will resonate at any given time. Just last week, in the haze of a depression I happily blame on quarantine, I stumbled upon a playlist called (and I quote): “Oldies playing in the car and it’s raining | Dreamscape (road trip w/ cars passing) 3 HOURS ASMR.”

I clicked on it and was immediately taken to a peculiar and, on the surface, comforting scene. In the video, a father drives a car; a mother gazes at her two young children, who are sleeping in reclined seats. Outside, rain pours. Slightly faded, echoey old music plays.

There’s something soothing about the video, and yet beneath the surface, something is off. While listening to it in the dark, I thought of The Caretaker and his ambitious, purposefully horrifying reimaginings of old ’20s records. Inspired by that scene from The Shining where all the ghosts dance endlessly in the Overlook ballroom, The Caretaker’s music was an experimental effort to express the sound of fading memory.

As the late theorist Mark Fisher later wrote, The Caretaker’s music expressed a desire to leave modernity, to leave the hopelessness of the present and to return to a past where there was still, potentially, a future. It was indicative of a wider cultural trend, a desire to recall the past coupled with an inability to remember the present.

“Isn’t, in fact, theoretically pure anterograde amnesia the postmodern condition par excellence?” he wrote. “The present — broken, desolated is constantly erasing itself, leaving few traces. Things catch your attention for a while but you do not remember them for very long. But old memories persist, intact… Constantly commemorated… I love 1923…”

“Oldies playing in the car and it’s raining” certainly does this — it brings us back to times we never had. The comment sections are filled with testimony to its nostalgic effects. One in particular, by someone named Doug L, is (in my opinion) worth reading in full.

“In the summer of 1967, we took a road trip cross country,” he writes. “We stayed at so many cool motels. Most had a theme. One might be a Hawaiian room, the next a cowboy decor. Dad and mom never went in public without being impeccably dressed. Dad gave us $1.00 a week allowance for candy or comics. It always seemed like we had enough. We could earn more doing chores. Dad drove me to college and made sure he shook the hands of every person in my dorm building. He took me to the presidents office and made sure they knew I had arrived. I was embarrassed but I now know why he did it. Pure class. Absolutely in charge and intelligent. Dad died of a heart attack one day, barely in his 50’s. Mom never seemed ok after that. There was always a lingering sadness. I miss them so much. What I wouldn’t do to be a little child and have them protect me again. Please love those around you… this trip is so short.”

The nostalgia is palpable. There’s something distinct and both timely and out-of-time to it. Beneath its vivid temporality is that retrograde desire to return to a distant past of tradition. Beneath that tradition is toxic masculinity, archaic social norms, a desire to shirk worldly responsibilities, and much else that could be read as negative.

This could be said of many of the videos created by Nemo’s Dreamscapes, the curator of this playlist. Their channel is filled with many other videos that feature oldies played in surreal, comforting situations — on beaches, in Disney movies, in dreams.

Oldies playing on the train but you are in a dream | 8D Dreamscape (train journey) 3 HOURS ASMR v.2 www.youtube.com

For some, the videos bring them back to more secure, less unstable days. “The days when you could work at a factory with good enough wages to purchase a home and car and comfortably support a 2 child family,” writes one commenter.


“Back when the world was a completely different world,” writes another.

The paradox of “Oldies playing in the car and it’s raining”: It takes us back to a time we can never go back to and perhaps would never want to go. In the photograph, kids sleep on reclined seats. We know this isn’t safe; we know we have to wear seatbelts lest we risk flying through the glass. But because we’re not there, because we never can be, it feels safe, lost in a safe alternate reality that we cannot have and cannot want.

TikTok, Spotify, and YouTube are overrun with videos that express similar double-edged nostalgia for bygone times that maybe never existed. Vintage French culture is a sonic world in and of itself. There’s “a playlist for old money living in the french countryside; light academia” and “a very chic parisian playlist for your aspiring french lifestyle (french chic playlist).”

a playlist for old money living in the french countryside; light academia www.youtube.com

These are aspirational playlists, upward-gazing playlists. Their aspirational nature crystallizes in playlists like “you’re the rich kid in an early 2000’s film (a y2k playlist)” and “pov: you’re really rich (playlist).”

There’s a whole world of peaceful, relaxing playlists (perhaps they’re all the spawn of the granddaddy of lofi playlists, “lofi hip hop radio – beats to relax/study to,” possibly one of the most iconic art pieces of our times).

Arguably born out of the lofi playlist world, taking notes from the viral formatting of vaporwave, aesthetic playlists are the logical evolutions of these early playlists built for tuning out the world and dulling its edges. Like cottagecore or music refracted to sound like it’s playing in an abandoned mall, perhaps these views represent modern ways of dealing with modernity — which, in our technology-driven generation, means tuning it out.

Some of the playlists are more overtly empowering, yet equally escapist. There’s a whole realm of playlists based on the idea that “you’re the main character.” In the realm of the Internet, the “main character” is basically the star of the story. It’s something none of us really are, but it’s something we’ve been trained by movies and film to worship — just like we worship the romance of the French countryside, just like we long for riches or “a summer love in Italy.”


a playlist that will make you feel like the main character www.youtube.com

Some have specific timestamps: “this playlist will make you feel like a 19th century villain” is sweeping classical, Carnival of the Animals and The Nutcracker, all music souped in nostalgia and made mournfully cryptic. They are “committing serial homicide at the 1893 world’s fair type beat,” according to one of the first comments. The villain playlists cross over neatly with sexy playlists: there’s even “since you’re looking I’ll put on a show (a villain playlist).? All of them bring the listener outside of the body, into a different and fundamentally unreal world.


A villain but make them the ✨main character ✨ // playlist www.youtube.com

In my cursory exploration of these playlists, I’ve come to determine that they’re actually new forms of interactive fiction. For a generation that has little but stories to hold onto, they’re a melding of cynical disbelief in the future and deep creativity that just may have the power to change the present.

It’s easy to see these playlists as nothing but small fictions, vessels that help us imagine peace and power most of us don’t have, never would have had, and never will have.

But music and art have always helped us imagine and then actualize other realities. The question is: Do we want the realities that are in these playlists? Or are they actually more often than not glamorizing hyper-capitalist, strategized futures that never were actually as good as they sound retroactively, refracted through music, muted by the crackle of a record player?


I suppose I’ll have to analyze this one a little more — but fortunately, there are thousands of dark and light academia playlists for that.

And though I never felt like my college nights were dark academia experiences and am now caught up in the very un-academic, un-magical realm of neoliberalism, I fundamentally know what the videos are expressing.

They’re the stuff of Tumblr photos of rain and coffee, of plaid skirts and family legacies and magical powers discovered in the darkness. They’re worlds experienced and youths I can never go back to and that I maybe never have even wanted, but that I always dreamed about and still do. In a world where there seems to be no future, maybe aesthetic playlists help us experience alternate pasts within the unbearable present.