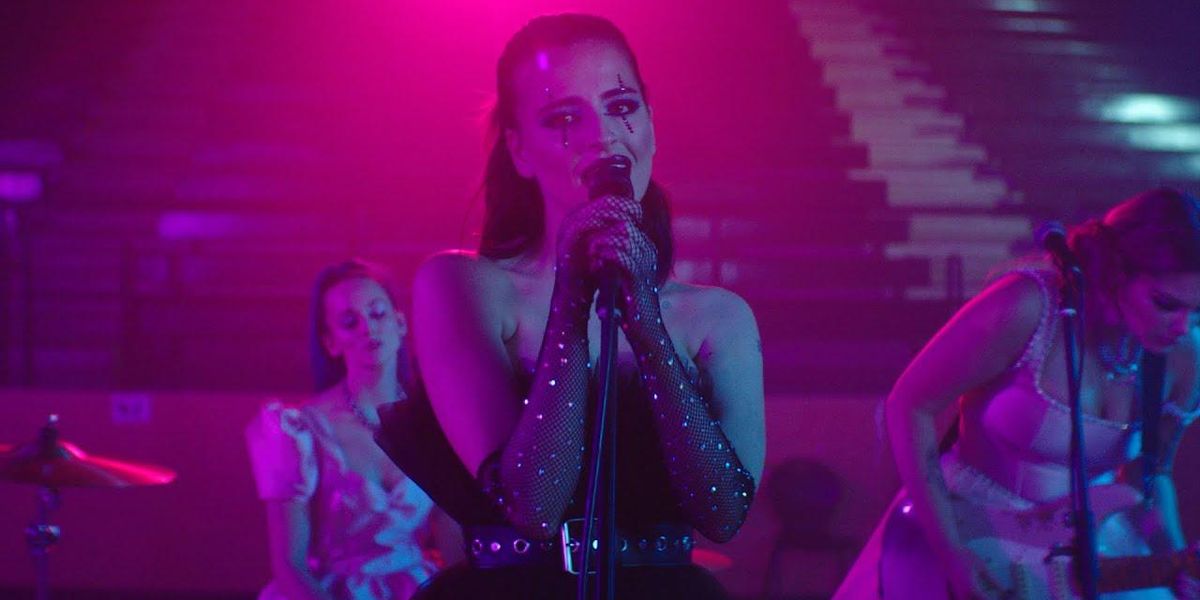 Over the past week or so, left-of-center TikTokers can only seem to talk about one thing: a band called Tramp Stamps.

Now, with the release of their latest single “I’d Rather Die,” Tramp Stamps are getting ruthlessly roasted online for being apparent “industry plants” — simply put, folks are inclined to believe Tramp Stamps formed not over of the members’ genuine interests in making music together, but because some industry executives decided they could make lots of money if they manufactured a “feminist punk” band.

The Tramp Stamps backlash got so heated that the band disabled comments on their TikTok, Instagram, and YouTube accounts, until last weekend, when they offered a notes app disclaimer about their professional and personal histories. According to the post and some additional social media digging, Blue (whose songwriting has landed on a handful of TV and film soundtracks) is signed as a writer and producer for Downtown Music Publishing, while Maino and Baker are both signed to a publishing company called Prescription Songs. (It feels relevant to mention that Prescription Songs is owned by Dr. Luke, who was sued by Kesha in 2014 for emotional distress, gender-based hate crimes, and employment discrimination.)

The term “industry plant” has been thrown around to shame young artists like Clairo and Billie Eilish, whose parents are in the entertainment industry, or bands like Greta Van Fleet, whose similarities to Led Zeppelin often feel a little too on the nose. Frankly, it’s a pretty inconsequential term to use especially now, when K-Pop acts are increasingly popular worldwide despite literally being assembled with potential profit in mind.

Personally, I don’t care if Tramp Stamps are “industry plants” or not. I’m not going to pretend that I immediately shun artists who found success thanks to their connections, and I’m not so bothered by the fact that three women with songwriting credits and roots in the music world are now marketing themselves as a band. But what I find dangerous about Tramp Stamps is their clumsy, flawed demonstration of “feminism,” and the fact that whoever is behind the band thinks this is what Gen Z needs — or even wants.

Tramp Stamps’ first original song, “Sex With Me,” came out in January. The song is a heavy-handed complaint about sleeping with immature men, loaded with an empty chorus that seems to rely on shock value: “Calling you daddy, you didn’t complain / When you werе having sex with me,” Maino hollers in-between verses about how terribly this guy treats her outside of the bedroom.

The band’s most recent song, “I’d Rather Die,” has drawn the most criticism. The chorus proudly proclaims that Tramp Stamps would “rather die than hook up with another straight white guy.” Aside from an allusion to assault — “You can’t get it up / I’m sick of hearing ‘it’s the alcohol,'” go the song’s most incriminating lines — “I’d Rather Die” is a blatant display of heteropessimism, or “performative disaffiliations with heterosexuality.” And when Tramp Stamps — whose members are all white — were confronted about issues of racial fetishization, Maino responded with a brief TikTok to explain that the song was intended to encourage “men to be better in bed.”

If “Sex With Me” and “I’d Rather Die” are any indication, the brand of feminism that Tramp Stamps attempt to sell is sexual liberation among cisgender women who sleep with cisgender men. When done well, like in “WAP,” this can be effective; Ben Shapiro didn’t grill “WAP” because Cardi B and Megan Thee Stallion were complaining about the men they chose to sleep with. “WAP” made men mad because its stars prioritized their own pleasure — a notion that Tramp Stamps have yet to grasp in their own content.

Even if “WAP” is fantastic at what it does, feminine sexual liberation in song alone isn’t adequate feminism. Tramp Stamps’ songs are not feminism. The band named their record label Make Tampons Free and claim they want Grammys, though it appears they aren’t doing anything to make menstruation products more accessible or address issues of sexism and racism in music award shows. (Again: Tramp Stamps’ members are affiliated with Dr. Luke.)

What’s worse is that Tramp Stamps — or whoever maintains their online presence — tend to claim that what they’re doing is revolutionary. “It’s the kind of stuff women talk about all the time with their friends, but no one’s ever put it to this kind of music before,” the band claim in their Spotify biography, as if they’ve never heard a single song by Bikini Kill, Heavens to Betsey, X-Ray Spex, L7, Hole, or any band even loosely affiliated with the riot grrrl movement.

In the final lines of Bikini Kill’s meditation on sex and the corporeal form, “I Like F*cking,” vocalist Kathleen Hanna sings: “I believe in the radical possibilities of pleasure, babe / I do! I do! I do!” I do, too — but those possibilities aren’t going to come from Tramp Stamps.