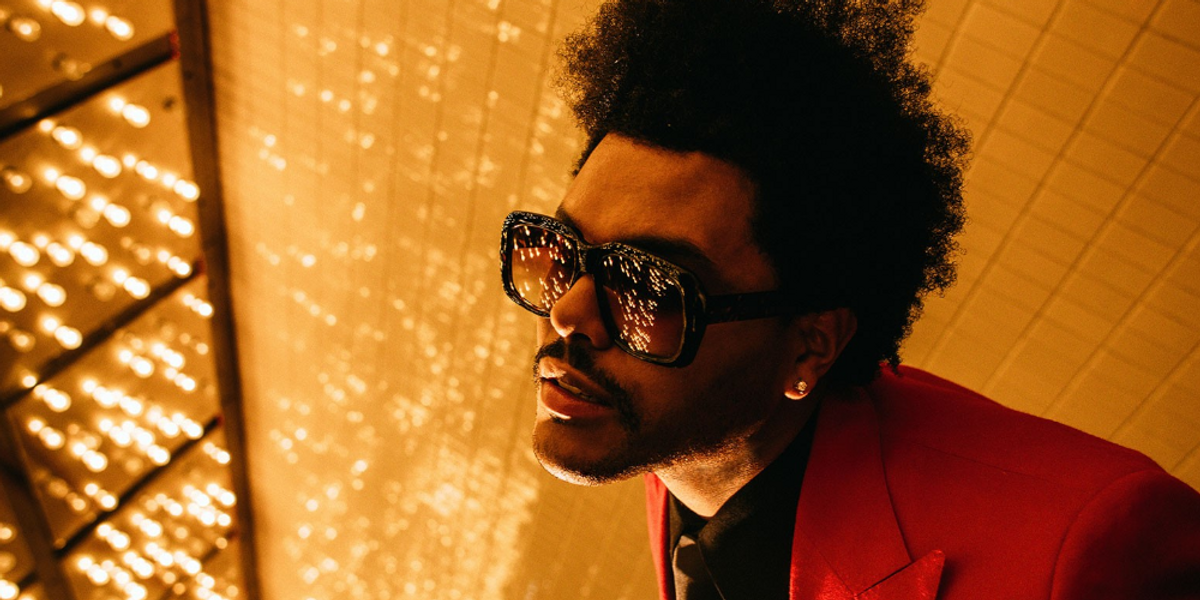 In the midst of a pandemic year, The Weeknd’s Super Bowl performance was one of the only sanctioned live major media performance events.

Watching it felt kind of like being in an alternate reality, appropriate for a performer who has always been a self-designed enigma. Even though The Weeknd gave us a relatively unvarnished presentation — he wore one outfit and bared his regular face to the crowd — the performance still felt surreal.


Super Bowl 2021: All the BEST Moments From The Weeknd’s Halftime Performance

It began with Abel Tesfaye in a car suspended among advertisements, a Las Vegas/Times Square-type display. A demon-angel creature descended to the Earth. To some, it was a direct commentary on consumerism.

“Welcome to Vegas, welcome to the Super Bowl, welcome to a financial firm’s fun zone,” writes Spencer Kornhaber for The Atlantic. “The gods—money and diversion—are the same, regardless of what you call the cathedral.”

From there, thousands of robot-eyed robed creatures rose up out of the stands, surrounding The Weeknd as he broke into the glistening “Starboy.” To us, much of The Weeknd’s music is experienced as a background — on the radio, in clubs, as the glossy backdrops to messy clubs and, since the pandemic, TikToks — so it felt somewhat strange seeing it centered onscreen.

It felt equally surreal seeing a crowded stadium — full of healthcare workers, no less. It felt as strange as seeing corporations rally around positive messages in order to sell products.

It felt as odd as seeing Joe and Jill Biden introduce a potential super-spreader event and then seeing Bruce Springsteen preach the value of “The Middle” from a Jeep.

But if you watched the Super Bowl, what else were you expecting, really?

How much you enjoyed The Weeknd’s performance likely depended on a few factors: How much of a fan you already were, and how jaded you were feeling about the Super Bowl on the whole. If you were neither a fan nor someone willing to celebrate the event, the performance probably came across as cookie-cutter and empty.

If you were a fan, you might be familiar with Abel Tesfaye’s story. Born in Toronto, Tesfaye was a high-school-dropout who was homeless and getting high before he eventually began writing songs about his druggy nighttime experiences. He began his career as a total enigma, refusing to appear publicly or show his face.

If you’ve been listening to Abel since day 1 this performance means so much!!! HUGE so proud!!!! @theweeknd

Eventually he crept out and began shaping himself into a public figure, but his image-consciousness came into heavy focus on his latest album, After Hours — the famously Grammy-snubbed quarantine heavy hitter that managed to do well, despite the fact that the clubs it was designed for were largely shut down.

During the cycle, The Weeknd appeared publicly and in videos with his face in various stages of disarray: bruised and bloody, then bandaged, and finally, reshaped into a gross approximation of a plastic surgery ideal for his latest video, “Save Your Tears.”

“The significance of the entire head bandages is reflecting on the absurd culture of Hollywood celebrity and people manipulating themselves for superficial reasons to please and be validated,” he said to Us Magazine.

At the Super Bowl performance, Abel appeared with his face un-bandaged and un-bloody but surrounded by lookalikes who wore bandages and various forms of face coverings, including a guitarist wearing a glittering skull mask. Maybe the unhinged figure he was embodying during the After Hours cycle had finally split into pieces, reflected onscreen or captured by the consumerist cycle.

The show began with statements about how addictive technology and corporations had taken over. It featured sci-fi creatures and lonely cityscapes; it ended with total forgetting, bandaged faces lying corpse-like on the football field.

The performance was also exciting to look at even if you didn’t care to analyze it at all. Featuring a truly amazing display of pyrotechnics and a custom-built stage within the stadium, it’s easy to see how The Weeknd spent $7 million of his own money on the show.

Still, it felt empty at times, featuring moments of stillness that we rarely see during the all-consuming, hyped-up spectacle that is the typical Super Bowl performance. The songs were sometimes magnetic, sometimes forgettable as they blended into each other. The vocals were impressive, except when they faded into soupy reverb.

The Weeknd looked like a star, yet he only wore one outfit and showed less skin and less of himself than any Super Bowl performer over the past few years. For a performer whose songs are mostly about overdoing it on sex and drugs, this show was surprisingly tame.

Yet there were moments of maximalism — the fireworks, the disorienting and trippy and much-memed journey through the underground, the dance party on the field that reminded all viewers what we’ve been missing out on in the clubs this year.

trying to scroll twitter while avoiding all the weeknd memes https://t.co/6XaEqhiO2D

In all, it was whatever you wanted it to be — safe, sexy, dramatic, subdued, emotionless, an ironic imitation, too flashy, too genuine, too smarmy. Like the whole Super Bowl, it was a treacherous super-spreader event or an inspiring testament to collective unity and talent.

The pandemic has challenged everything we’ve long praised about humans — our social nature, our ability to perform and innovate. Instead, it’s highlighted the people who keep things going when society breaks down: the healthcare workers, the grocery store clerks.

The Weeknd’s performance was a glimpse back into a world where things had never gone so wrong, where illusions were better preserved — but still off somehow, still devoid of truth. In the end, it was The Weeknd onstage, but it was the viewer deciding what they wanted to see.