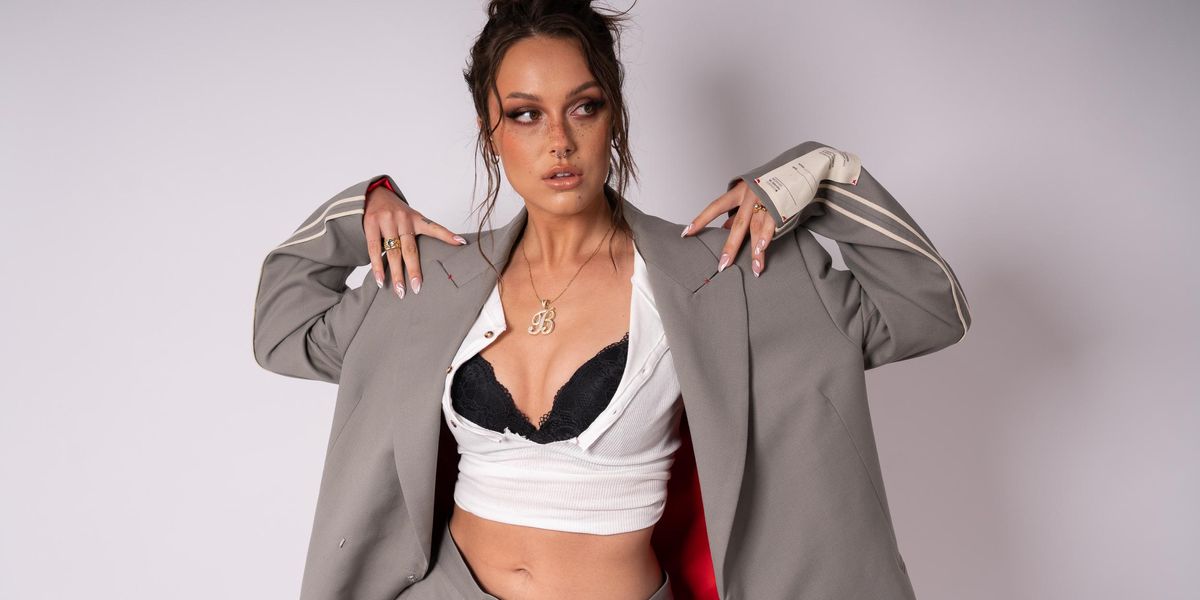 Bailey Bryan has come a long way in six years. She moved to Nashville from rural Washington in 2016 and released the single "Own It." The song landed on the country charts and earned Bryan praise from the music press.

But even "Own It" incorporated hip-hop beats with vocals hinting at her love for pop and R&B. Successive singles moved further in that direction, and last year's full length Fresh Start completed the transition. Although she's moved away from country, a tiny hint of a twang has remained.

Her latest single "MF" is a collaboration with 24kGoldn, another performer known for their versatility. The track is a breakup song you can dance to with a throwback beat that recalls SWV and What's the 411? era Mary J. Blige.

As she gears up to release new music, Bryan talks to us about the making of "MF," songwriting, and competition in the industry.

How would you describe the musical chemistry between you and 24kGoldn. What was the MF recording session like?
I feel like Golden and I’s musical styles mesh together really well in the sense that neither of us really subscribe to the rules of one single genre. Both of our sounds are somewhat ambiguous but also very distinctly us. He’s a rapper with these pop and rock influences, and I’m a pop singer with these heavy R&B and hip-hop influences. It turns out that’s a really great combo. I don’t know if he would be the most expected feature for the song, but I had a feeling he would sound incredible on it. I got his verse before ever meeting him or even talking to him about any of it, and somehow it turned out perfect. The first listen when I got the song back with his verse was really special for me because it just felt like my intuition was correct.

The song has sort of a '90s R&B feel. Do you listen to a lot of music from that era?
So much! One of my first musical memories is being really little and dancing around the living room while my mom, who is one of my best friends in the world, was cleaning or something and blasting “True Friends” off of Brandy’s debut album. She loves TLC and Ginuwine and definitely exposed me to some of that at a young age. When I got older, I dove even further into my love for the genre, and it inspires my writing probably more than anything else. Nineties R&B is like my comfort music.

Do you still identify with SBB? What does it mean to you?
I will ALWAYS identify as an SBB. SBB stands for “Sensitive Bad Bitch,” and I created the term to describe my music and my personality. I start every live show by saying “Hi, I’m Bailey Bryan and I make Sensitive Bad Bitch Music." And it basically is just my way of accepting all parts of myself. I want people to know that you can be confident, bold, independent–all of the things that we associate with being a “bad bitch”–and still have feelings. Nobody is any one thing all of the time. You can be all of those these and still be soft and vulnerable and human, and it doesn’t need to take away from your power whatsoever. I’m emotional AF and the world we live in today tends to look at emotion as weakness. Through my music, I want to show how much strength and badassery there is in feeling your feelings.

What’s your favorite way to collect ideas for songs? Do you make a lot of voice memos?
SO MANY VOICE MEMOS. And I never delete them. I have 2103 voice memos on my phone at this time. Most of which are me mumbling incoherently, because I had an idea like in the airport bathroom and I don’t want anybody to hear. But I also know that if I don’t record it right that second I will forget. My voice memos and notes app are a chaotic place for sure.

How much of a perfectionist are you in the studio when it comes to your vocals?
I always try to find the balance between perfectionism and not overthinking. It just depends on the song. Some of my releases are songs that I spent days re-recording the vocal on to try and get the right tone. And then with others what you hear in the final recording is literally my demo vocal from the day I wrote it. I find that those quick in-the-moment recordings sometimes have the most magic. That was actually the case with “MF." Most of my vocals you hear in that one were recorded on a demo mic while laying on the couch in my producer's studio. There’s one line in the chorus, the second to last line, “One way you take it too far." That was completely freestyled while we were just trying to get the melody down. I had no idea I said it until we listened back, and that’s the vocal take we kept.

Do you feel any sense of competition with other female singers?
I actively try not to. I don’t want to be all “Blame the industry,” but it’s true that the music industry and social media and what not does make it feel like there’s only so many spots for successful female singers, and they’re reserved only for the youngest and hottest and shiniest. And weather that’s how it actually works or not, it’s not a helpful way for me to look at it as an artist. I try to be inspired by the success of my peers and only let it motivate me. But I’m human and sometimes that doesn’t work at all haha.

"play w/me" helped start your current musical path. How do you feel about the track now?
I love it! It was my first full step into pop music and there’s like a million things I would change about my vocal and the production, etc., now that I’ve come into my own a bit more as a pop and R&B artist. I feel like I’m finding my sound, but at the same time I wouldn’t change a thing because it set me on the path I’m on now. And to see people still showing big love to the song like two years later is super affirming and wild.

What’s the best part and worst part about making social media content?
The best part is it’s an opportunity to relate to other people! I’m really goofy about my content especially on TikTok but I’m also low key being very vulnerable because all my jokes and concepts are really just me making fun of the way my brain works and my love life–the same stuff that inspires my music inspires my content. And when people relate it makes me feel really seen. The worst part is that being vulnerable on social media can be really draining. When it isn’t received the way you’d hoped, it feels personal even if it’s not, and too much of that feeling makes it easy to burn out. It’s not easy to stay consistent.

What are you working on now? Will there be new music soon?
There will be new music so soon. I’m trying to decide on the next single as we speak because I have so many new songs that I’m excited to release. It’s so hard and nerve wracking to pick one. But there’s lots on the way.