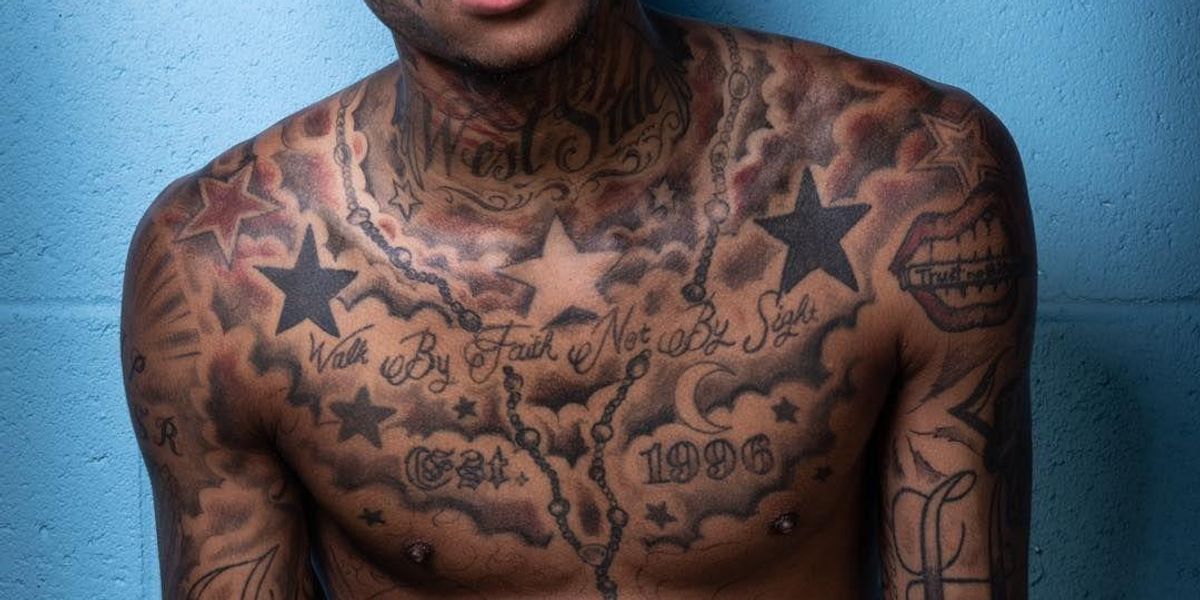 Post Malone is of course one of the most tatted-up musicians out right now, but he is also not a rapper. But similarly to rappers, Posty’s tats are exclusive to him and are just as famous as the man behind them. Whether it be Gucci Mane’s ice cream tattoo or the Game’s LA Star, rappers have made some pretty gnarly tattoo choices over the years. Here are some of the most tatted-up rappers out right now.

When Lil Skies entered the scene back in 2016, he was easily one of the most tatted up rappers of that upcoming class. He has since upped the ante even further, covering his entire body and nearly his entire face in ink.

He got his first tattoo at 16 in honor of his friend who was hospitalized and deathly ill with meningitis. “Tomorrow is another day but it’s not promised” was tattooed on his shoulder, and from there he just continued collecting ink. On his face, he has his mom’s name, a gorgeous shaded rose, and some Japanese text, spelled backward, right under his eyelids. As of 2021, both sides of his face remain covered with too many tats to list at this point.

The legendary emcee has collected some of the craziest ink over his long career. He’s got veins crackling through his forehead. He’s got blacklight lips and stars that glow in the dark tattooed on his neck and behind his ear. He’s got stitches trailing down his left cheek, along with a handful of small tats that look like they were just doodled on, and that’s just on his face.

The Cash Money signee was another rapper who was severely tatted up right at the jump. In fact, his first hit was fittingly titled “Tats on My Neck,” which broke down how his mama hates his tattoos. These aren’t poorly designed street tats either; Caskey sports some of the most impressive ink around across his body.

He’s got a massive Native American figure across his stomach and chest and an equally large Buddhist monk covering his back, with coinciding skulls across his shoulders. This past year, he also shaved his head and got the top jaw of an animal skull added while the bottom half covers his jawline and chin. The tattoo was so daring that it spawned a whole article in Inked Mag.

“I saw this movie Apocalypto and in that movie, there’s a warrior ruler who wears a detached animal raw around his chin,” he said. “I thought that was the coolest thing ever and it would be cool to have jaws on my head that made it look like this entity is eating me.”

The tattoos carved across Miami rapper Stitches are more infamous than the emcee himself. Some may even argue that his ludicrous tattoos kickstarted his career. The stitched smile across his mouth, the cartoonish AK-47 across his right cheek, the stars on his ears, the “fuck a job” script across the side of his skull: It’s altogether rather sinister. Recently, Stitches got an even more striking tattoo across his cheek: a gory tear that makes it look like his face is peeling off.

The internet personality-turned-rapper is another ridiculous entertainer whose tattoos are as notorious as he is. Boonk, otherwise known as Boonk Gang, got his first tattoo of his mom’s name when he was just 16. Across his face he has a sketched black heart on his cheek, a crown over his right eyebrow, and the handicap toilet sign right between his eyebrows, among other ridiculous tats.

His name is Kid Ink for a reason. The LA-based rapper has some of the most impressive ink in rap, and he’s spoken on it extensively. Some highlights include a cool Frankenstein tat across his left bicep, the Batman symbol under his left eyelid, and a lightning bolt under his right. But his chest and back are where his signature pieces lie. LA is engulfed in flames across his stomach, and a Pirate Elephant with two samurai swords envelops his back. However, his most famous piece is his dual chest piece portrait tat of his mother and grandfather on each pec.

The late Lil Peep sported some of the most unique tattoos in hip-hop. The Cry Baby tattoo above his right eyebrow reminded him not to cry when he looks in the mirror. The “get cars” and “die young” tattoos inked atop his forehead are almost too on the nose now. He had Lisa Simpson freaking out on his neck and of course his signature anarchist symbol on his left cheek. All in all, Lil Peep’s tats can never be replicated, as they were all totally unique to him.