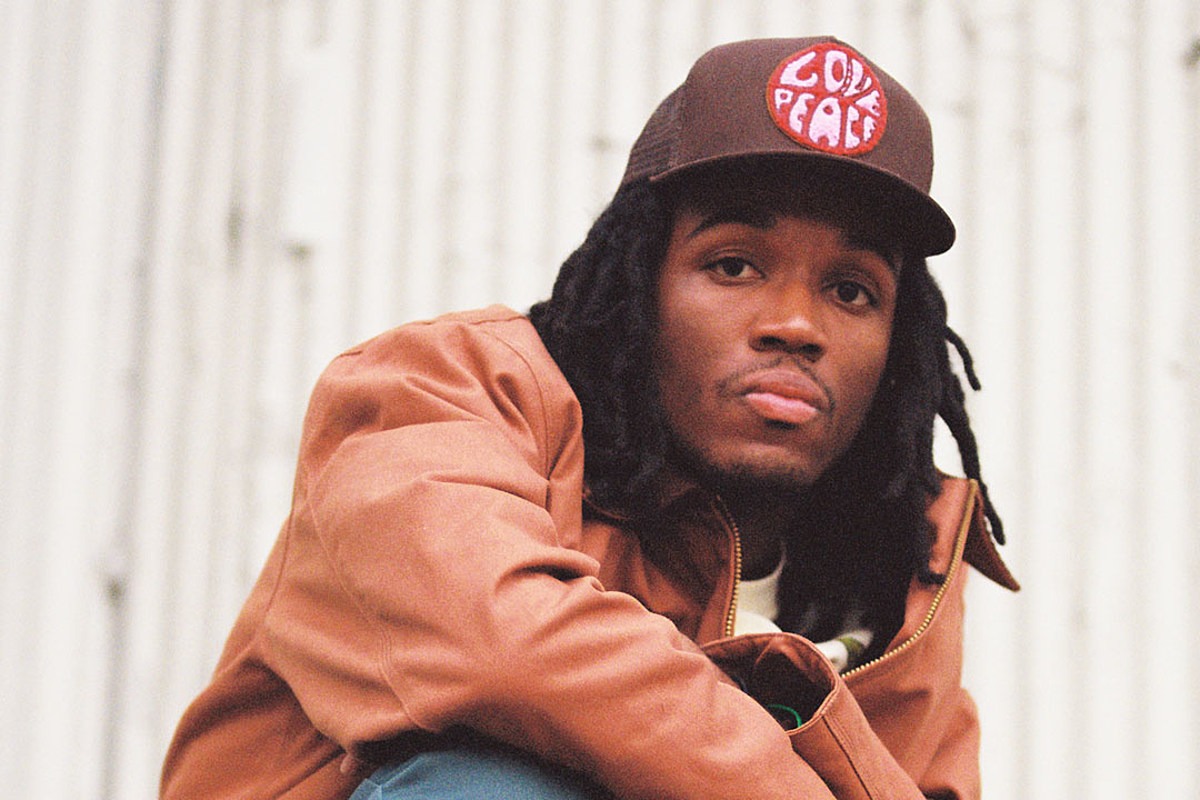 Guess Who's Back
Saba controls his own hourglass. After ending a four-year interlude and jolting himself back into the rap landscape with his album, Few Good Things, his level up has never been better.
Interview: Kemet High
Editor’s Note: This story originally appeared in the Spring 2022 issue of XXL Magazine, on stands now.

Saba’s music has everything but limits. The early 2022 release of his Few Good Things album verifies that sentiment and brands an upgrade of his filmic storytelling, wordplay and elastic flows. All those were formerly introduced on his 2016 debut solo album, Bucket List Project, and followed by his 2018 sophomore LP, Care For Me. Considering the critical praise he’s received for each, Saba seems to be three for three.

The 27-year-old Chicago native also mostly produces for himself and artists from his rap collective Pivot Gang. He learned how to excel on both sides of the bat by watching his father, a longtime local Chi-Town R&B singer named Chandlar, cook up music from scratch as a kid. Between Saba’s stirring lyricism about self-exploration and the head-cracking beats he uses as a foundation, it’s clear that the layers of his creativity have helped him elevate since coming into the rap game nearly a decade ago. But even with his own formula down pat, he’s already searching for a better version of himself.

Saba recently moved to the West Coast to take advantage of opportunities there. He started attending therapy and is committed to doing more work that will spread his legacy far beyond the parameters of a studio booth. Catching up with XXL in mid-February via Zoom, Saba talks about getting back into hip-hop’s forefront, his placement in Chi Town’s music scene, including Kanye West’s journey, Bone Thugs-N-Harmony’s influence and Saba’s own superpower.

Saba: Everything man, everything. It’s been busy. But it’s gone so long without being busy, that it’s nice to just feel living in purpose and shit. Having that shit taken away and now it’s coming back. I got a lot to be grateful for, you know?

How would you explain the four-year gap between your Care For Me album and Few Good Things?

Necessary. I want to be known to do something great. And I want to be known to put my all into something. I always want the music to be reflective of where I am in life. And I think when you’re moving so quickly, it’s hard to know how you feel. It took breaks. It took starting the album, stopping the album, starting the album and scrapping the album. I done did so many versions of Few Good Things that the four years was to get it, not perfect, but to get it to where I felt like this is the best that I can do right now. I’ll get better. I’ma keep getting better, that’s what I’ma keep focusing on. But it took me four years to feel like, All right, this is what
I want to say.

Your song “Come My Way” features Krayzie Bone. You have said you grew up on Bone Thugs-N-Harmony so talk about that influence and how you got him on that track.

That’s how I’m here, man. I heard [The Notorious B.I.G.’s] “Notorious Thugs” when I was a kid, and that was the moment where the light bulb went off. Like, Wow, I should make music. And then, my grandad helped me to get a four-track cassette recorder that year and it’s been a wrap since then. Having that “Come My Way” and being able to link with Krayzie Bone, that was like the most full-circle shit that I’ve ever experienced where it’s still unbelievable.

These niggas don’t sound like nobody I’ve ever heard. It was just such a big deal discovering them and how they used melody. And how they used cadence and all of these patterns and production. How everything felt. Sometimes you couldn’t even understand them. It’s just a feeling. And understanding that feeling. That’s what I feel inspired me a lot to focus on that in my music.

In 2019, you, Smino and Noname announced yourselves as a group called Ghetto Sage and dropped “Häagen Dazs.” The fans have been fiending for another scoop. What’s up with it?

What I’ll say is, they are two of my favorite artists, period. So, it’s definitely going to happen. The timeline that it’s going to happen? I can’t tell you. We talk about it, and we all are excited and want it to happen. When all of the stars align, there’s going to be a logo in the sky like Batman and it’s going to be Ghetto Sage. And you’ll know that it’s time. But it’s feeling like sooner than later, without saying too much because I don’t fucking know.

Where do you see yourself in the Chicago rap scene?

It’s like when they was asking [New York Knicks player] Derrick Rose about the MVP. It feels like the reporters were expecting him to not view himself that way. And it’s like, why not? Why not me? And that’s how I feel when I think of, not just the Chicago rap scene, but how I view the quality of work and what goes into it. Why can’t it be me? So, that’s saying a lot and a little at the same time. But that’s the answer. Shit.

What do you think makes that Chicago scene elite?

Are you still independent?

I’m still independent, yeah. I always hear words like, “Lack of infrastructure.” We don’t really got no labels. It’s like, not a lot of people come to Chicago expecting it to be like this hub of amazing art. And for a long time, it’s [been] like, us having to put ourselves on and then put each other and it’s non-stop work, work, work. I feel like Chief Keef blowing up was such a shift in how people viewed Chicago. And once we had Keef, we had Chance The Rapper. It was so much attention brought on the city. Any look for the city is always a good look in terms of once we got one, we got them all. I think it’s just going to keep growing and keep getting bigger.

The Ye doc, they explain it pretty well in that, ’cause he’s in New York in most of the doc. I’m in L.A. right now. A lot of times, you gotta leave the city to get it and then you bring it back. It’s like some hometown shit where you exhaust your resources or something. You do so much and then it’s like, OK, naturally, the next step is to go somewhere else.

You mentioned Kanye West’s recent documentary on Netflix. What part of his journey did you find the most fascinating or surprising?

I feel like most artists I know, that’s the story that they have. You feel the similarity where you stand in your soapbox, yelling at people, “I’m talented! I can do this! Believe in this!” And then, people are just looking at you like you’re crazy. Nobody gets it until everybody gets it. It’s hella surprising, but this is Kanye. This is at a point where that doesn’t mean anything. It’s kinda an age-old story by so many artists. It don’t even gotta be on that level, but so many people are just following their dream and trying to tell a deaf crowd, “Look what I can do!” It’s crazy to see even Kanye having that same experience. It was really eye-opening in that regard.

You produced eight out of 14 songs on Few Good Things. Would you say that Ye is somebody that inspired you to both rap and produce? If not, was there anybody?

To me, I never really separated them. I started producing and rapping around the same time. And that was just the way that I knew how to do it. Kanye was definitely an inspiration, but I was watching my dad produce all of his music and then go in the studio and sing the songs that he was writing. So, it was kinda like the way that I had been taught. I didn’t really even know early on that there was a different way to do it. I’m like, If we want to rap and make original songs, we gotta make the beats.

Your collective Pivot Gang dropped the album You Can’t Sit With Us in 2019. Will there be a follow-up?

It’s fa sho happening. Part of doing shit as a collective, there has to be so many things that align before you’re able to really go because I think for us, it’s always making it a priority. It’s not something we’re just trying to do on the backburner. We’re trying to dedicate and have full attention to detail. We been working non-stop. I feel like it’s at least 100 Pivot Gang songs right now since the last couple of years have racked up.

What’s the worst part about being Saba?

The worst part about being Saba is that there’s not two of me. I would imagine this is how most people feel about themselves. You recognize how much easier the world would be if everybody just thought how you thought and approached things how you approach things. And that’s not meant to come off sounding boujee or like a dick or nothing like that. It’s just my life would be easier if everybody was me.

So what’s the best part?

I think I’ve managed to make some of the best relationships in music, in life, that I think are really unparalleled. The best part of being me right now is just waking up and being able to make decisions that you thoroughly believe in, and you can recognize people around you believing in that because you do. And that’s a powerful thing. It’s like having a superpower. That’s the best part about being Saba is that you get to have a superpower.

What’s next for you?

What’s next for me is going to be trying to put my big boy pants on, really taking myself serious and really stepping into how I see myself. I’m gonna do everything in my power to make sure that all the work we’re doing is not just being cast aside. So, when I think of what’s next, no ceilings. What’s next for me is I want my name to be in that conversation. Not just when you ask me, but when you ask other people. So, that’s what I’m trying to plot on and figure out how to do that. When you ask somebody who the top five are, how do I get them to say Saba?