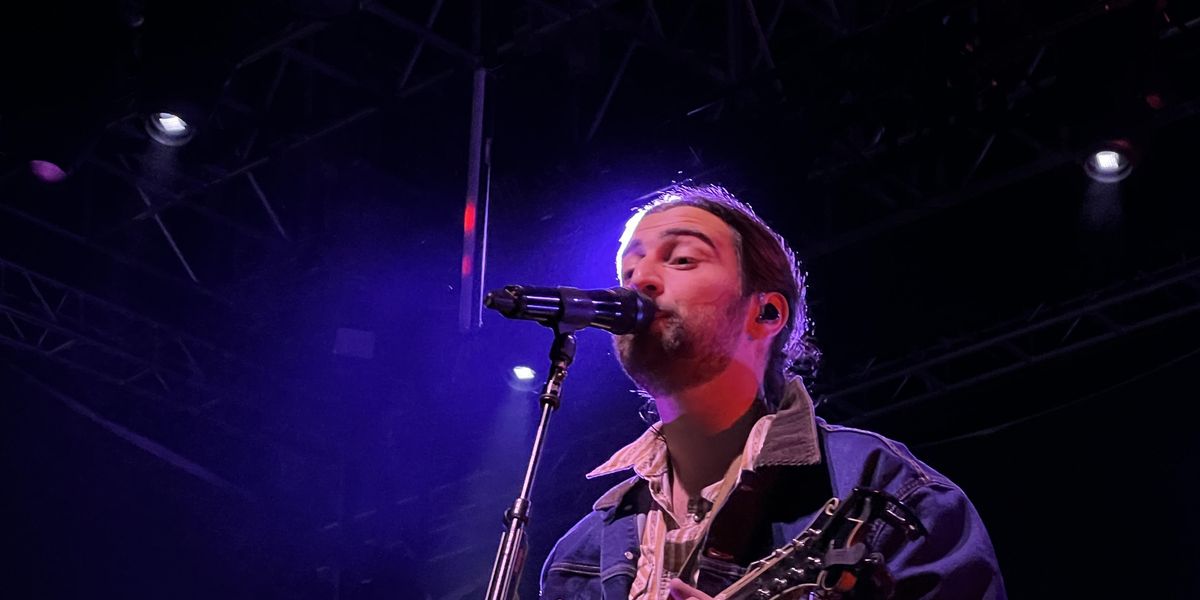 Noah Kahan has reinvented autumn – it’s a Vermont state of mind and no one is mad about it. Welcome to Stick Season.

Stick Season: Commonly known as that time in New England when the leaves have fallen and its face-numbingly cold, yet the snow is yet to fall. It’s a quiet, scary, beautiful standstill covered in sticks.

Noah Kahan has taken this incredibly specific season and gifted us the soundtrack of fall. And now he’s bringing it out of the woods and onto the stage.

So what happens when you take an album, written and recorded in Vermont during the pandemic, and perform it on an NYC rooftop? Well, when the album is as fine as Kahan’s Stick Season, it makes every big city feel like a small town.

Early on in his highly anticipated tour, Kahan stopped at The Rooftop at Pier 17 for a sold-out Thursday night. Located on the eastside waterfront, fans packed out the venue in what felt like 40 degrees, just to hear him live. Not only was this show worth it, but there was no better way to hear it.

The self-proclaimed “Jewish Ed Sheeran'' made this intimate, folksy album feel energetic and expansive, in a setting so far removed from the album’s subject. It felt like the breeze blew straight down from New England and we could sense the unseen stars above. Kahan had the crowd jumping to an acoustic guitar with skyscrapers lit up to his left and the Brooklyn Bridge glowing to the right.

Kahan himself commented that the show would be cold and uncomfortable – true to his brand. However, I couldn’t help but feel warm and at home, tucked in among a crowd of hundreds.

Beyond Kahan’s signature uniform on display (plaid shackets and beanies), the crowd already knew nearly every word of his third album. Awesome, since it was released less than 10 days prior, on October 14th. There was not a moment to feel lost or alone, surrounded by Kahan's powerful lyrics coming from the 20-somethings singing at the top of their lungs (myself included).

Kahan mostly played new tracks but treated us to some of his earlier hits like “Mess” and “Young Blood.” Although these feel like throwbacks from a seasoned artist, I find myself startled that Kahan’s only 25 years old and being hailed as one of this year's breakout stars.

However, Kahan has experienced 5 years of critical acclaim and toured globally – so, why are we all listening now?

It’s a double-edged sword. Kahan puts into words larger themes of isolation, longing, and frustration and does it with such imagery that his story is completely compelling.

Now, am I happy that Kahan’s journey involved heartbreak, depression, and loss? Of course not, but Kahan’s truthful, clever, and brutally honest lyricism takes what we’re all feeling and doesn’t sugarcoat or handle our hearts with kid gloves and cliched generalities.

It’s 2022 and the crowd is singing along to “Growing Sideways,” a truthful depiction of Kahan’s mental health struggles and path to healing. It’s not an everything will get better anthem or a rallying cry. This song is a terribly specific confession about dealing with pain but injected with everyday Band-Aids – So, I forgot my medication / Fell into a manic high / Spent my savings at a Lulu / Now I’m suffering in style.

Kahan reminds us that we’re all just coping every day and the exquisite part of his music is that sometimes we get to cope together in spaces that artists like him create.

While Noah Kahan continues his Stick Season tour – possibly growing up a bit along the way – I can’t wait to hear how he continues to explore those delicate places just off-center that we can’t always put into words.

Everything feels better with a guitar – even when it hurts.