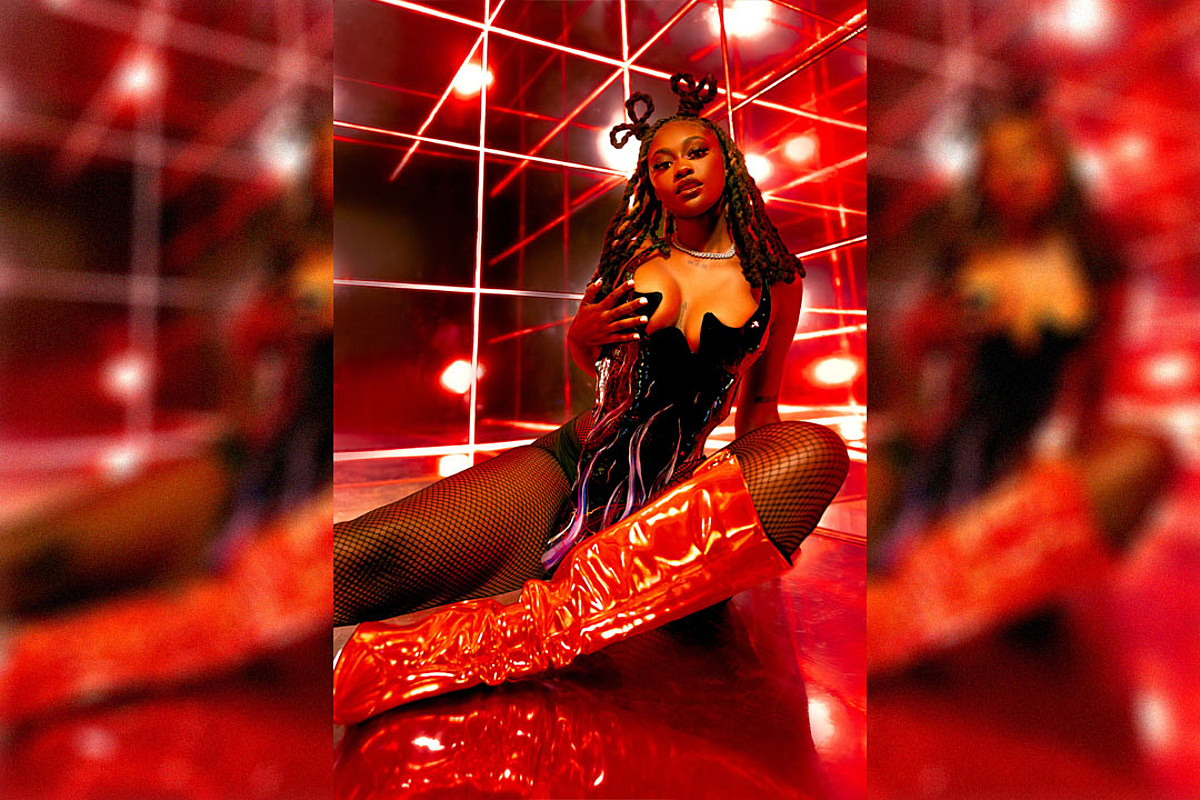 Booming, minimalist, with a brilliantly simple call-and-response hook, Kali’s 2021 song, “MMM MMM,” has inspired thousands of TikToks, but there’s one that the Atlanta-bred rapper tends to think of first.

“It’s this video of this girl. She’s driving in a car, she looked crazy, but she was screaming ‘MMM MMM’ with her whole soul,” Kali recalls. “She was changing some of the words a little bit, but she was just like, ‘He want my number, had to hit him with the ‘Mmm Mmm!’ Mad as hell, like her man just pissed her off. It just stuck with me because I was like, she really gets it. That’s how I was feeling when I was making the song.”

That clip embodies what makes her brand of hip-hop great, and why she’s set herself apart in a city oozing with talent: it creates a sense of catharsis. Kali’s two biggest hits to date, the ATL Jacob-produced “MMM MMM” and 2021 breakout “Do A Bitch,” are songs fans rap along to with their full chest. She would never say lines like, “I don’t want that nigga, my IG just stay on his screen” timidly, after all. Plus, her first official project, This Why They Mad Now, which was released last year, is a kick-in-the-door announcement of arrival.

But during a conversation via Zoom in February, Kali is affable and considered, not exactly the firebrand that some of her music suggests her to be. The 21-year-old, born Kaliya Ashley Ross and raised in the north Atlanta suburb of Roswell, has been rapping since she was a preteen. Her stepfather was a producer, and he helped her record her first tracks at just 12 years old. Also, a former accomplished youth soccer player, Kali talks about her music career with the kind of driven attitude you’d expect of a professional athlete.

“Since I was so young making music, obviously I was still trying to figure that out,” she shares. “It took me being young, making music, teaching myself how to record and make my stuff sound crisp to really get the full me in the song. I’ve been taking this seriously for about four years now. From the start to now, I definitely learned my sound.”

She honed that sound, which nestles squarely between the Lattos and the Foogianos of the current Georgia talent boom, at the age of 19. The rising artist almost had a chance to share her talents with the world when she was slated to try out for Netflix’s rap discovery series, Rhythm + Flow, in 2019. However, the judges decided to unexpectedly cut the auditions short. That, coupled with her very first project before This Why They Mad Now being deleted from the internet, left Kali in an unenviable position.

“I had a two-month stint where I was like, I don’t know if music is for me,” Kali admits. “My music kept getting taken down and I was moving around too much. And then with ‘Do A Bitch,’ I was like, Let me stick it out and write a song again.” Serendipitously, the first beat she listened to from Telly, a producer who had been emailing her packs for ages, turned out to be the instrumental for “Do A Bitch.”

The Rhythm + Flow debacle did have another major silver lining: it brought Kali together with Houston MC KenTheMan when they met during auditions. Subsequently, Ken has become a close friend and outspoken booster. “I’ve always told everybody, ‘This girl is a superstar. If I had a label, she would be the first person I’d sign,’” Ken says.

Ken describes Kali as “the sweetest girl I’ve ever met in my life,” and the two have a clear bond that transcends music. They’ve spent Thanksgiving together in Houston, which also happened to be where they wrote their standout 2021 collaborative track “Ain’t FWM.” Ken is extremely confident in Kali’s future, and it seems the only thing the two butt heads over is when Kali will hurry up and release her new stuff already.

“When I tell you that if I could leak that girl’s unreleased, I would,” Ken adds. “She’s got so much. I just be like, Damn, man. It’s crazy how hard-working this girl is.”

In February, Kali became an Atlantic Records artist. By March, she released her Toxic Chocolate EP, which she jokes “is giving a whole lot of toxic energy, but in a good way.” The first single, the simmering duet “UonU” with Yung Bleu, is a song for people going through the emotional ringer. This time, women’s hypocritical partners are accusing them of the very indiscretions they’re committing themselves. Then there’s “Eat It Up” featuring BIA, an X-rated number over a beat reminiscent of Ying Yang Twins’ “Wait (The Whisper Song).” With this eight-track EP, Kali continues to embrace a change in her creative approach that really began with “MMM MMM” and has stuck through recent writing.

“In the beginning of me taking [music] seriously, I would be shy about having people in the studio, so I would have to write beforehand,” Kali conveys. “I just wanted to make sure I got something done in the studio and I wasn’t really comfortable rapping in front of people, so I was just writing. As the years passed by, I taught myself how to freestyle. I’ve taught myself now, how to go in the studio, get on the mic and put the words together.”

With this increased confidence, she’s working more off in-the-moment emotion and sudden inspiration. It’s a less calculated approach that still yields focused music thanks to her penchant for precise flows.

“This Why They Mad Now was me trying to be seen,” Kali says of her debut project. “I’m taking this seriously and y’all need to pay attention. [Toxic Chocolate] is like, Oh, she’s coming and she’s here to stay.”

Kali spending this spring on the road opening for Latto on The Monster Energy Outbreak Tour is proving just that. Kali also wants to put together her own headlining run when the time is right. For now, the rhymer is enjoying the liminal space between being an artist to watch and a bona fide star, like an athlete waiting to hear their name called in the first round of the draft.

“I tell my team all the time that it still has not sunk in yet,” Kali expresses. “Sometimes I’ll be like, ‘Oh for real? They want me to perform? I’m going on tour?’ It’s still so new to me and so crazy, because I was manifesting all of this and it’s all happening to me.”

Keep getting them mad.