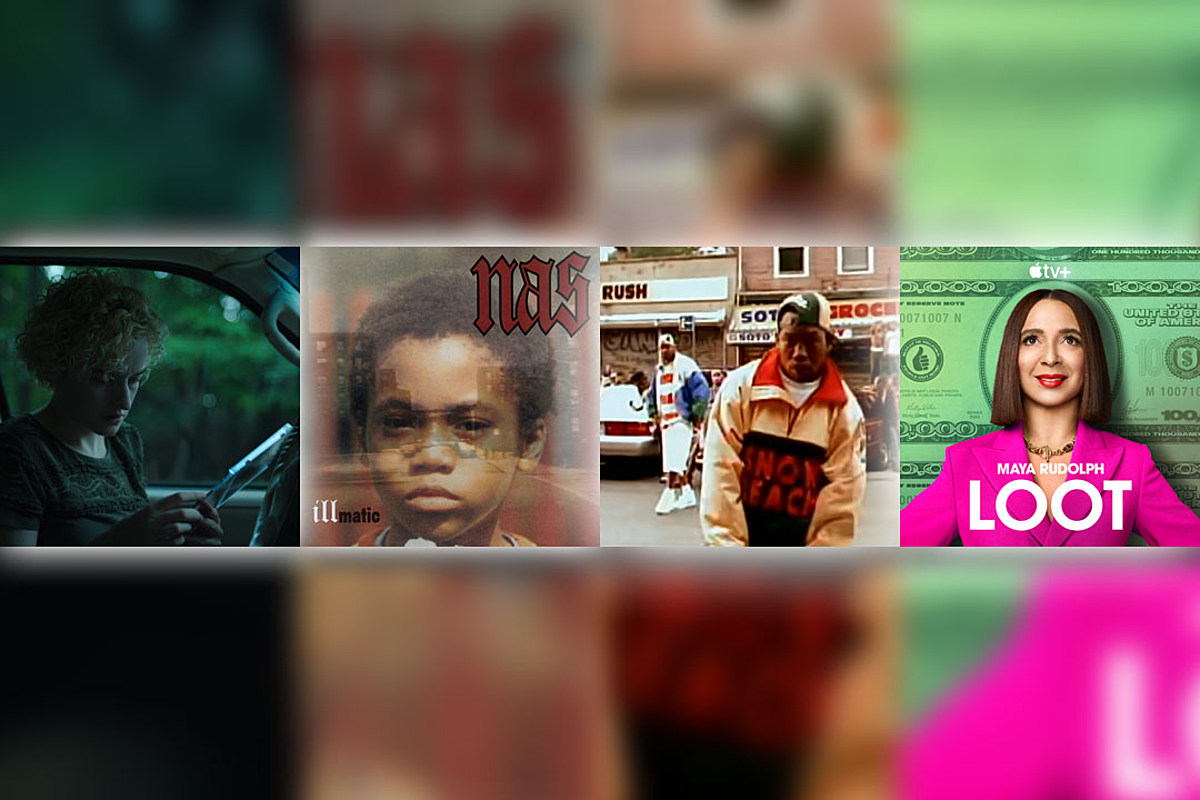 Make a Scene
Words: Luke Fox
The golden age of hip-hop is infiltrating some of TV’s most revered series of the modern era. From Nas to Wu-Tang Clan, classic rap tracks of the 1990s are soundtracking scene-stealing moments.
Editor’s Note: This story originally appeared in the Fall 2022 issue of XXL Magazine, on stands now.

Nas’ classic track “N.Y. State of Mind” is a suitable soundtrack to fuel the road to revenge. Ozark badass Ruth Langmore slides the rapper’s Illmatic into her pickup truck’s CD player and speeds off for vengeance in season 4’s “The Cousin of Death” episode, which premiered on Netflix this past April. The truck’s wheels spit up mud on a dusty road as DJ Premier’s searing beat for the 1994 track kicks through the speakers and that Queensbridge whiz with the half-moon cut rattles out his poetic aggression. Nearly three decades after its release, the song has provided a sense of nostalgia in one of the most lauded TV series of the modern era.

Sure, the acclaimed street music amid a contemporary backwoods setting used in the Emmy-nominated Ozark episode for Outstanding Music Supervision may be an odd coupling, but it’s the careful song selection of Ozark’s music supervisor Gabe Hilfer that makes the scene sing. As music supervisor for some of television’s most cutting-edge series, Hilfer, 45, has the reach to pair those 1990’s hip-hop influences with top-notch TV and film productions and stream them worldwide. His work on Netflix’s Ozark—a gripping, grim plummet into the world of high-stakes money laundering, set in the sticks—has reaped rave reviews for its knack for seamlessly weaving rap classics into its riveting narrative.

Ozark isn’t the only television series hopping on this trend. In 2022, small-screen smashes such as Euphoria, Loot and Atlanta have juiced their visuals with the vintage bars from artists like Juvenile, Wu-Tang Clan, Tupac Shakur, Big Pun, Puff Daddy and Lauryn Hill, to name a few. Despite not being set in the 1990s, they are cribbing from that vibrant period to reflect theme, character and ethos.

Loot, which debuted on Apple TV+ in June, works in the shiny opulence of Bad Boy Records’ late-1990’s dominance—Ma$e’s “Feels So Good,” Puff Daddy’s “Can’t Nobody Hold Me Down,” “It’s All About the Benjamins,” and The LOX’s “Money, Power, Respect”—to flex the lavish lifestyle of lead character Molly Wells, a billionaire divorcée discovering her new life, played by Maya Rudolph.

The show’s music supervisors, Kerri Drootin and Charlie Haggard, were hired later in production to inject the L.A.-based show with familiar, New York beats. Puffy’s “Bad Boy for Life” soundtracks the crew’s glitzy car pullup to a charity gala in Episode 6. The show is littered with popular ’90’s hits as “Feels So Good” opens the series as one yacht speeds towards a bigger birthday yacht. “That was just a super fun scene,” Haggard shares. “I remember watching it completely dry. They just had sound effects of the crowd noise there. There was no music the first time we saw it. So, it was a blank canvas. Coming up with ideas for that and then seeing ‘Bad Boy for Life’ plugged in was just a very rewarding moment for what we do.”

Clearing monster jams from the Puff Daddy days may pay off, but with multiple samples and guest artists to account for, access to these tunes does not come cheap. “We were going after really big songs with really recognizable, classic samples,” Drootin adds. “Luckily, we had the money to pull it all off, too.” Haggard recalls a memorable moment on social in that regard: “We got a tweet from Questlove saying, ‘I don’t want to ever hear any complaints from Apple about the money I want to spend on music after seeing Loot get executed.’”

Other shows like Euphoria feature a traumatized Rue singing along to Tupac Shakur’s “Hit ’Em Up” during a car ride in the opening chapter of Season 2, setting an unhinged tone for the episodes that follow. Prior to that, the 2020 sports dramedy Ted Lasso set the scene with A Tribe Called Quest’s “Award Tour” and Onyx’s “Slam” in its first season while season 3 of Succession last year had KRS-One’s “MC’s Act Like They Don’t Know” part of a birthday celebration.

That’s distinct from throwback series this year like Power Book III: Raising Kanan or Pam & Tommy, which employ 1990’s hip-hop to emphasize the same time setting of their stories. Wu Tang: An American Saga, which launched in 2019, and carried into 2021, also includes music from Wu-Tang members themselves, plus EPMD, Fu-Schnickens and Dr. Dre, among others, to capture the essence 30 years ago. The golden age of hip-hop is helping soundtrack the golden age of television. Ozark’s Hilfer believes the influx of 1990’s hip-hop into binge-worthy programming is simply a generational thing.

“It’s the music that we really take pride in and take ownership of,” Hilfer says. “That’s our music, the music I feel represented me in my youth and my transformative age of listening to music. And now the people who are making the shows, writing the shows, directing the movies are in the same age bracket. A good chunk of people who have established themselves and have more of a creative sway in the world of TV are between 35 and 50. And those people all came up with a love of hip-hop that overlaps with the music that we grew up on.”

Over Ozark’s four-season arc, 1990’s hip-hop is integral to the character development of Ruth Langmore, a hard-done-by boonies hustler played fiercely by Julia Garner. At various points in her journey, Ruth can be heard bumping the early work of The Notorious B.I.G., A Tribe Called Quest, Wu-Tang Clan and Pete Rock & C.L. Smooth.

The show was able to clear four tunes from Nas’ 1994 debut LP—“N.Y. State of Mind,” “Represent,” “Life’s a Bitch” and “One Time 4 Your Mind”—and incorporate Illmatic as a loud but invisible character in one of Ozark’s hardest-hitting hours.

Hilfer is reluctant to humble brag, but after cuing up heavy metal (The Wrestler) and classical music (Black Swan) for his early film work, he’s happy that “The Cousin of Death” was nominated for a 2022 Emmy in Outstanding Music Supervision.

Raekwon is a big fan of Ozark and the Illmatic-playing episode in particular. The Wu MC’s own “Can It Be All So Simple” verse can be heard in Episode 9, as Ruth ponders her cousin’s funeral. He views moments in which his older music is included on present-day TV as longing affection for the past.

“It just keeps that whole ’90’s nostalgia for what they want us for,” Raekwon says. “It keeps us relevant. I have tons of music that is there for people to incorporate in the greatest way in their endeavors.”

The esteemed lyricist is in good company when hearing his own 1990’s music in revered series alongside other respected rappers. Rae pays close attention to these placements. Surely, he caught Wu’s “Protect Ya Neck” playing in Loot; brother Method Man’s “I’ll Be There for You/You’re All I Need to Get By” in HBO’s Euphoria; and the omnipresence of Enter the Wu-Tang (36 Chambers) in Wu Tang: An American Saga, which has a third season in the kitchen.

“It feels good to be next to my peers and hearing they shit in dope movies or dope series because that time was a special time,” Rae explains of the trend. “We were making music not only to soothe our fans, but we wanted to break into other audiences as well.”

Strategic TV placements naturally lead to increased streams, and exposure for 1990’s rap acts who have seen their radio play swiped by contemporary trap artists. A quick and easy Shazam during a Netflix-and-chill session can translate into real revenue and invaluable marketing. Or, as Rae puts it, “It feels good to get that recognition, but it also feels good to get that check.”

“I think part of why all the late ’90’s, early 2000’s hip-hop works so well, part is like going into an opulence feel and not specifically songs that are just money, money, money,” says Loot’s Kerri Drootin, who fondly recalls listening to L.A.’s famed Power 106 radio station during that era.

And with more 1990s-bred music lovers selecting songs for popular programs, it feels inevitable that the marriage between timeless hip-hop and contemporary television will proceed.

“Sometimes I used to think about, Yo, I want to get on the radio,” reflects Raekwon, who is interested in scoring films himself. “And now? Oh, shit, I’m on TV shows. It just shows that hip-hop still dominates in the greatest way, and it’s paying homage to some of the greatest artists that did it in the heydays and are still doing it.”

Nothing iller than that.