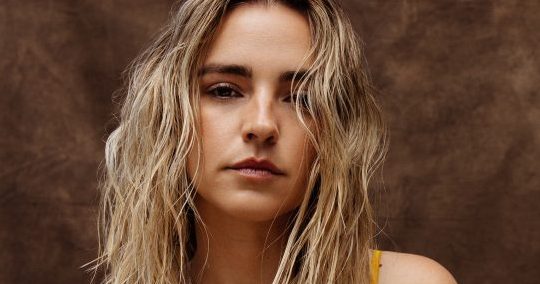 Katelyn Tarver has a new song out next week but I was lucky enough to get the chance to chat with her about her last release, ‘Nicer’, a song that reflects on the people pleasing tendencies that we all have sometimes and which has become almost an epidemic of non-confrontation leading us to bottle up all that angst. The first line of the song was inspired by her mum telling Katelyn off for honking at a car which had driven across her in traffic.

Katelyn says: “She was visiting me in LA and I guess didn’t think the guy who cut me off deserved a honk. “Gosh, Katelyn! You used to be nicer!”. It made me laugh, but it also weirdly stuck with me for years afterward. I think because it hit on a part of me that I was trying to get to know. The part of me that isn’t such a people pleaser who isn’t afraid to speak her mind a little more. To all the former rule followers and recovering people pleasers, may this song help us get out there and be a dick sometimes if we need to”

The brilliant video sums up this dichotomy in a very visual way with a split screen approach that works perfectly. Directed by Fiori it perfectly complements the new song that unfolds visually as it develops lyrically.

On the new album, Katelyn has aimed at capturing painful truth in a pop production that is the perfect foil for her soul baring lyricism and her radiant voice. The album will bring together strains of pop, folk, country and indie-rock to document a period of her life when things were constantly changing, constantly evolving.