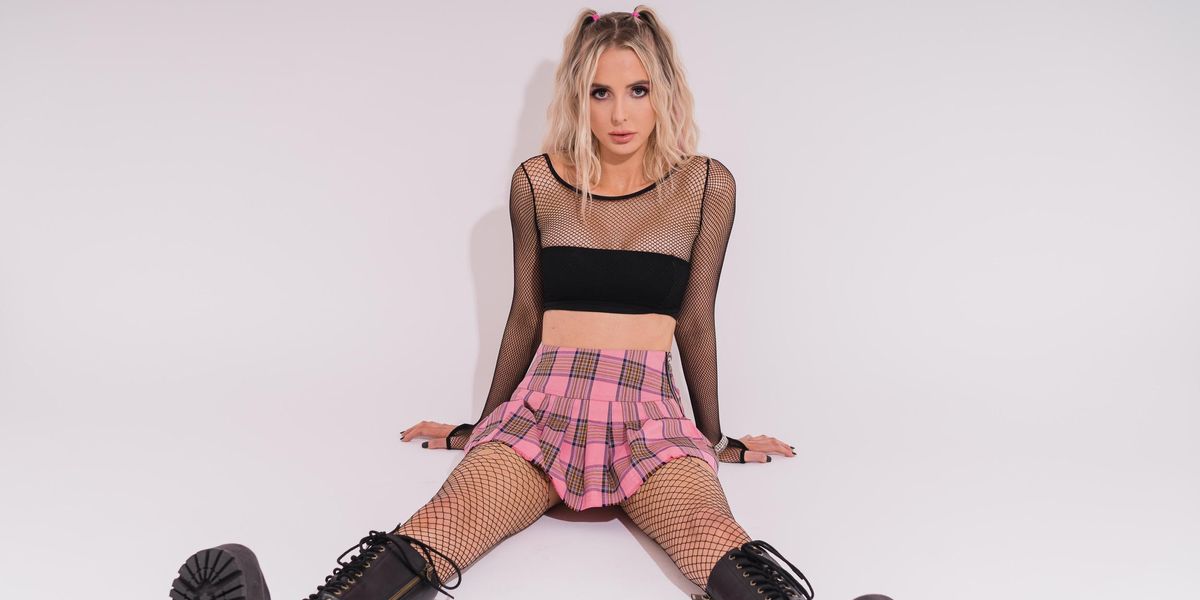 After three years of releasing singles, Ceara Cavalieri is making music she loves.

The UCLA grad has adopted a Y2K aesthetic complete with chunky boots, pleated skirts, and studded belts. Over the past year, she's formed a sound to match. Recent music has felt fresh and accurate to the time. Her latest single, "Liar Liar" could have appeared on the soundtrack to 10 Things I Hate About You or Can't Hardly Wait. It's fun, loud, and catchy–just what it's supposed to be.

Though she gravitates towards pop punk, Cavalieri's voice sounds great over the top of an EDM track. A cover of Miley Cyrus's "Midnight Sky" with EQRIC and PHARAØH has racked up over a million streams on Spotify.

She came by our studio in Los Angeles to talk about her recent music and how it was made.

Is “Liar Liar” about a real person?
Yes, I wrote this song after I found out my boyfriend was cheating on me in Vegas with someone I used to be really good friends with. The night prior, I actually had a dream that he was cheating with her, which is where the lyric, "I had a sixth sense you were a shithead," stems from. He tried denying it for weeks, but eventually, one of his friends told me the truth with screenshots, and I wrote "Liar Liar" the following day.

What did you listen to growing up?
I listened to such a wide variety of music growing up, but some of my favorite artists were No Doubt, Avril Lavigne, My Chemical Romance, The Killers, Green Day, and Taylor Swift.

Your recent singles have had a rock sound. Did you feel pressure early on to make music that sounded more pop?
In a way, yeah. But this past year I’ve been writing a lot more and doing a lot more sessions with so many new and amazing collaborators, which has really helped me to find my sound as an artist.

I know you’re heading in a more rock direction, but you sound great on the recent EDM singles you’ve sang on. Will we hear anymore of that?
Yes, definitely! I love EDM music so much, and I especially love creating music that makes you want to dance. I’ve been collaborating with a lot of different DJs and have more dance releases on the way, which I’m super excited about.

How do your songs come together? Do you record a demo and send it to your producer?
My creative process is different every time, but if I am writing by myself, I will usually start playing some piano or guitar chords into Ableton, record melodies over the chords, and then dive into the lyrics. I have a notebook I write my lyrics and poems into when I’m at home. I also use this app called Evernote to write down my lyrics, inspiration, and random feelings throughout the day when I'm not home. I always look back on the notes for inspiration, especially if I have writer's block. If I’m going into a session, I would say most often I come in with an idea and song that I've started, and then the producer will start playing guitar, and we will all spitball melodies and lyrics to finish the song.

How do you choose what producers and musicians you work with?
If I hear a song that I really like, I will usually look at the credits on Spotify then reach out to the producer via IG or email to work together. Other times, if a producer reaches out to me to work, then I will usually just look at their discography and production style to see if it would be a good fit.

How much do you pay attention to streaming numbers? Do you feel anxious the night before a song comes out?
I do pay attention to streaming numbers, but I don’t let them affect my feelings towards a song. In reality, if one song doesn't get as many streams as another song, it doesn't necessarily have anything to do with the song itself but is dependent on how the music is being promoted along with so many other factors. Also, when a song comes out, I always feel super excited the night before because I can’t wait for others to hear it! I may feel a tiny bit anxious, but it is mostly excitement.