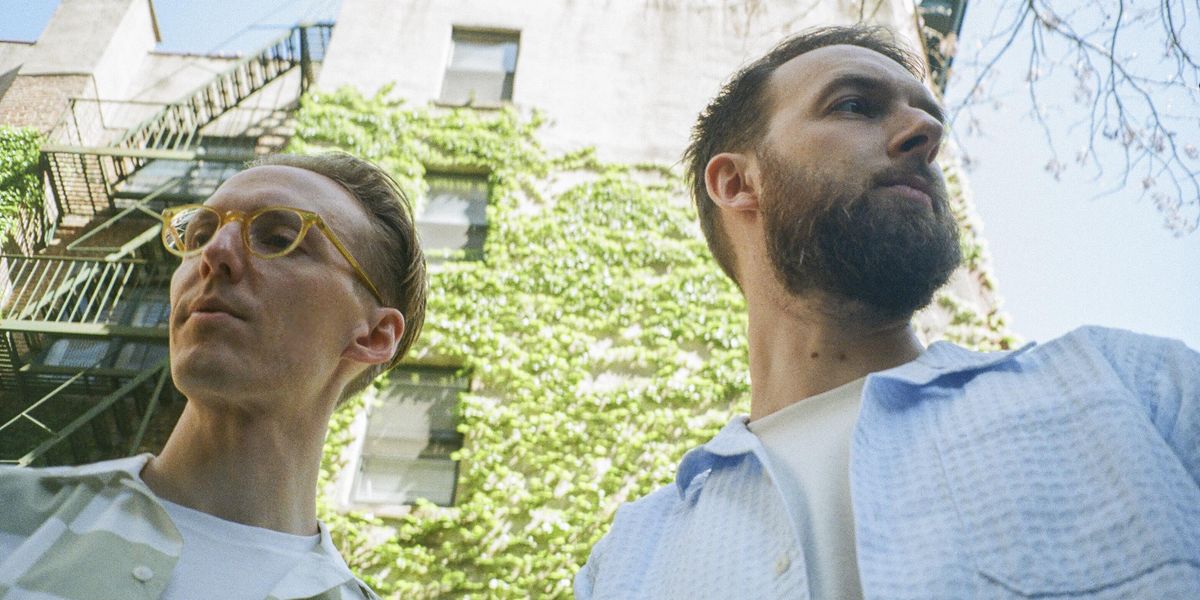 Since releasing "Warm on a Cold Night" in 2014, HONNE has built a huge fanbase with their catchy, moody pop songs and collaborations with Pink Sweat$, Anna of the North, and Khalid. The duo of James Hatcher and Andy Clutterbuck released their latest album, LET’S JUST SAY THE WORLD ENDED A WEEK FROM NOW, WHAT WOULD YOU DO?, in October. We caught up with them on tour before their show at New York's Terminal 5. Clutterbuck did most of the talking.

Where did the title of the latest album come from?
Andy Clutterbuck: Hey! The album title came from the opening line of a song we have called "WHAT WOULD YOU DO?" We felt it was such a provocative question, especially given the time it was released, when in many ways it had felt like the world was ending.

The sound is more optimistic than the 2020 mixtape no song without you. Since that was your “quarantine release" was there a conscious effort to make this album more upbeat?
AC: I’d say so, yeah. We always want to make sure every body of work we release is different from what’s come before. The songs "WWYD" and "COMING HOME" were written at the same time as the mixtape but they didn’t feel right for that project. So after NSWY was released, we went back into the studio to build on those two songs, and that’s how it all came about.

You’ve got some great guest spots on the album. Do you keep a wish list of collaborators? Is it hard to get who you want?
AC: Thanks, we’re so happy with how the album turned out and with all the features. We have some names on there that we’re not even sure how we pulled it off. There’s no wish list as such as it’s so song specific. If we have a song that needs a feature, we think about who we like that would really suit the song and go about it that way. It’s a pretty lengthy process trying to tie people down and to get them to commit, but with a little bit of determination and many years of making friends in the biz, we were able to make it all work.

Are you perfectionists in the studio? There are a lot of layers and different sounds in your production.
AC: Yes and no. Perfectionists in the way that we spend a lot of time listening through and making sure everything flows nicely and that the mix works, but not in the way that we love to leave character in the song. By that I mean if there’s background noise in the recording or if it’s a badly mic’ed up piano or whatever it might be, it stays in the record and we work around it.

You guys love a laid back lo-fi beat. How much are you influenced by Internet culture and trends?
James Hatcher: No, they’re influenced by us. Next question. Haha.

You’ve released several remixes of songs from the album. Since you do remixes yourselves, how critical are you of other people’s remixes of your songs?
AC: Yes, we’ve commissioned quite a few remixes over the years. For us, it’s a way of reimagining our songs without being attached to the process. But we do often become quite attached to our songs, and if we get a remix back and things have changed a bit too much, then it can be hard for us to approve, unless of course it’s musically on point and the vibe is good.

When you’re recording, how much do you think about how a song will translate to a live show?
AC: Not too much, to be honest. We probably should think about it more. But truthfully, our live show is a lot different than how we sound on record. We have a live band, so instantly the songs are bigger and more energetic. We also rearrange the songs to make sure our fans are getting a unique experience when they see us.

Do you write a lot on tour? There’s only two of you, and you don’t need a full band.
AC: Ideas are always coming to us on tour, but getting it down in some sort of audible format doesn’t tend to happen, unfortunately. We’re lucky that we do get to have some downtime when touring but we want to use that time to explore and experience all the different places we visit. Traveling has always been a passion of ours, even before HONNE, so whenever there’s a chance, we’ll be out soaking it all up. I guess that in turn gives us inspo when we eventually go back into the studio.

I sort of think of you guys as a modern day Hall & Oates. Who’s your favorite musical duo?
AC: Oh good question, there’s a lot of brilliant duos out there, but one of the best duos in our opinion are OutKast. They’ve soundtracked many of our formative years, parties, etc. Their music, style, and videos are just so cool.