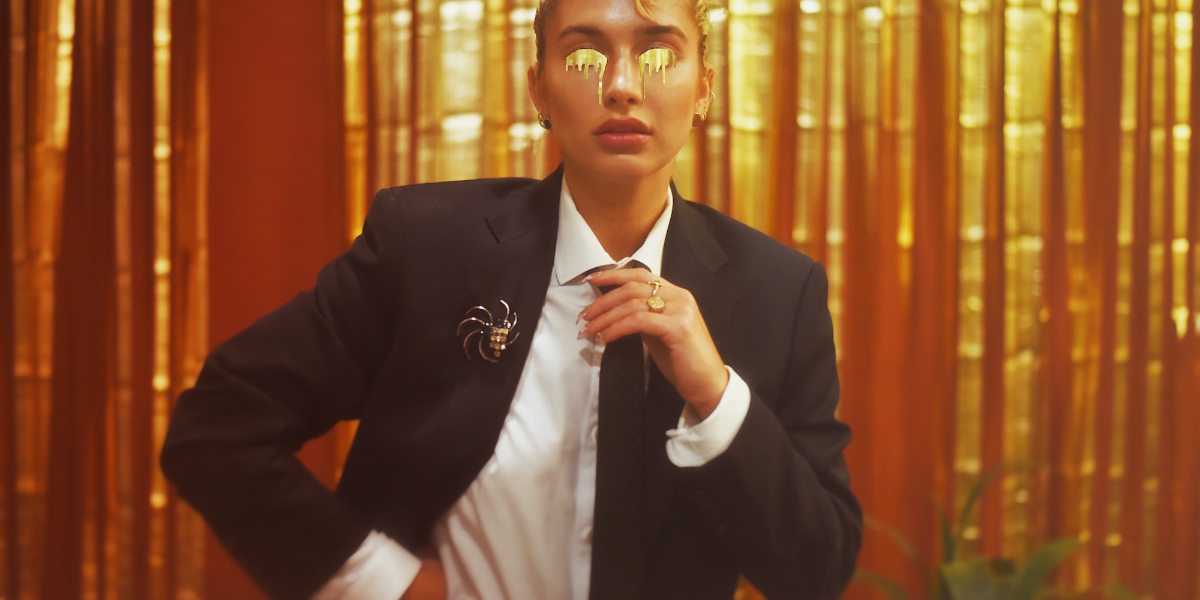 Indie artist BIIANCO truly went above and beyond for her latest release, which is accompanied by nothing less than an interactive video game.

For her brooding new single “that’s what friends are for,” the LA-based, Queens-born artist and producer was inspired by R. L. Stine’s “Choose Your Own Adventure”-style Give Yourself Goosebumps books to create her own multi-scenario music video adventure.

The video starts innocuously enough, following the artist on a motorcycle speeding towards a friend’s house. Then, as she enters, the camera pans back to reveal a zombie lurking in the bushes.

Inside, one friend receives a text that begins, “Is your hair still pink?” and ends with the inevitable, “I’m outside.” She opens the door to see her ex — a mad-eyed zombie.

Then the screen freezes, and the viewer is given two choices: “Kiss him” or “Tell him to f**k off right now.”

Yes, the zombies are metaphors for manipulative exes coming back from the grave; and as the viewer, you’re given the opportunity to fall prey to the encroachments of zombified lovers or send them speeding back whence they came. Each answer will lead you to a different outcome, some bloodier than others.

“Thematically, this song is really inspired by poor choices that get made during breakups. People become the worst versions of themselves. It’s almost like they become zombies or this Mr. Hyde version of their Dr. Jeckyll,” said the artist. “So, when it came time to make the video, I was obsessed with the idea of having exes show up as zombies and force my fans to make choices and show the consequences of their actions.”

She felt that an interactive video game would be the best way to force viewers to make their own choices about how to handle the zombies of their and their friends’ pasts. To create the video, BIIANCO and collaborators shot no fewer than 8 separate videos so that every possible storyline had its own unique ending. Spoiler alert: It involves a lot of cathartic skull-crushing and zombie-stabbing (if you play your cards right).

“This was easily the most in-depth and complicated thing I’ve ever created,” the artist said. “We had to shoot for upwards of 8 different versions of a music video — so every choice in the game has a corresponding outcome. And then we had to code it all into a game. It took almost half a year but was worth it. I’m a diehard video game lover so this was a dream come true for me.”

BIIANCO – that’s what friends are for (official music video) www.youtube.com

Like much of BIIANCO’s work, the boundary-breaking video aims to deconstruct strict binaries and limits, instead envisioning a more creative landscape. “I have always encompassed a myriad of masculinity and femininity and it naturally translated to my presenting appearance — blending menswear with ornate fake nails or working on my motorcycle in lingerie,” she says,

“I — like many women — also have had personal experiences dating toxic men who were endlessly threatened by my masculine sides and really pressured me to move away from it. And I almost succumbed to that pressure before waking up and getting out. So, continuing to challenge these binarisms in my fashion and appearance is a way of me reclaiming my identity back from toxic masculinity.”

Murdering zombies is one way of sticking it to the patriarchy (though not all toxic exes in the video are cis men). But BIIANCO’s career and music has never fit into boxes — and her penchant for self-produced, dizzying down-tempo electronic music is matched by her love for creative disruption.

The artist began producing music during an all-womxn Ableton retreat in Joshua Tree, and since then she’s been creating unstoppably innovative and genre-breaking art in many different forms. During quarantine, she released five new singles and seven covers. Her other recent creative offerings have included a series of music production tutorials shared on TikTok and a book of poetry called This will wreck your heart. She also has a full-length album coming soon.

With “that’s what friends are for,” she’s marked herself as not only a masterful producer and musician but also as an innovator in terms of both technical form and conceptual creativity. The song itself, a blurry and seductive cluster of synths and bass, sounds like it wouldn’t be out of place at a club in Berlin or in the penultimate episodes of Russian Doll, and the release is a promising window into a new kind of media form and an artist with limitless potential.