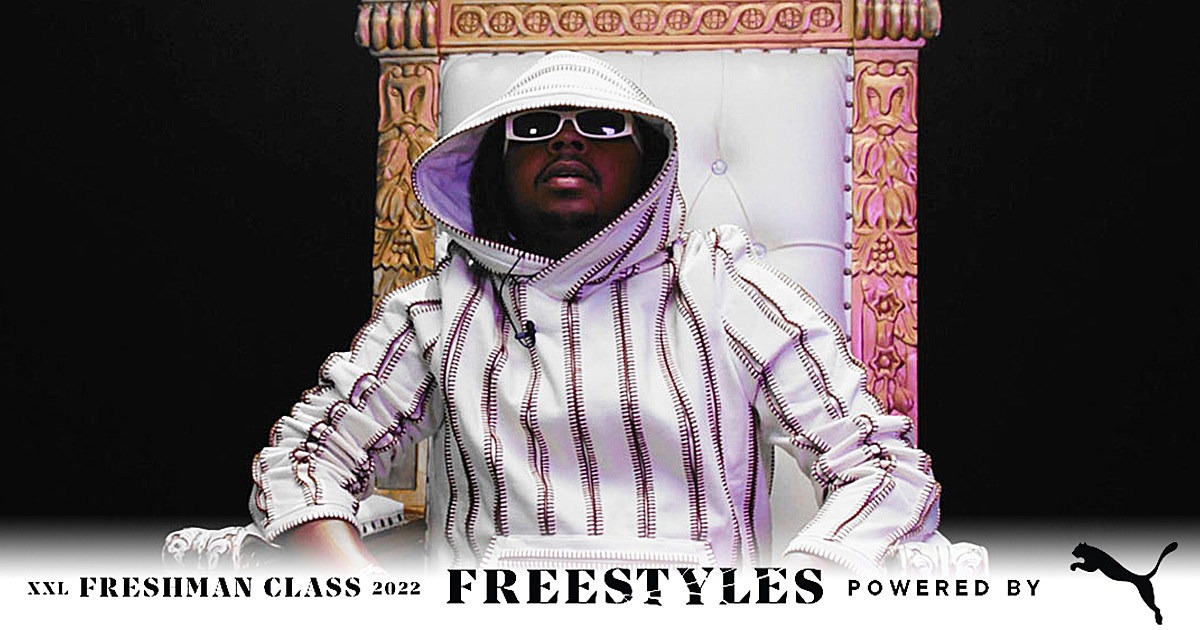 The Detroit rap scene's artists have made a hefty amount of noise over the last few years. Though Babyface Ray's entire brand is built off being stilly, his movement has been one of the loudest. By laying the groundwork and building a sizable catalog, his status in hip-hop has been consistently going in an upwards direction. That’s why he recently earned his spot in the 2022 XXL Freshman Class. The Midwest rhymer puts his skills to the test in his Freshman freestyle, where he rhymes off-the-top for close to two minutes.

The opening scene of Babyface Ray sitting on a gold throne and sporting a white, striped ’fit speaks to how comfortable he is whenever it’s time to step up to the plate. Hooded up, he spits about his rise from the pavement to the skies, and addresses his peers, who unfortunately were blocked from having that opportunity.

"My youngin’ caught a case, he been in it since the ninth grade/Fucked his scholarship because he tried to rob a dice game/When I let God lead the way, that’s when my life change/When you take a trip to go and get ’em, that’s when the price change," he raps tranquilly.

Also within his verse, which is strong enough to hit DSPs as an actual song, Ray waves off the unimportant people that come around him, declares to his enemies that he’ll let the bullets of a 9mm rip through the lane like a Rajon Rondo pass and faces his newfound status. "You know I tax niggas, it ain’t no taxing me/I had to tell her ass to slow down, quit runnin’ after me/You know yo' mans will get smoked down, he like a pack to me/How it feel that you the G.O.A.T. now? That’s what they askin’ me," Ray rhymes in between pauses to catch his flow.

Rounding things out, he speaks to the notion that his growth and relevancy is everything but limited. "Window open I’m coolin’/Concrete I grew/West love me like Snoop/I’m international, too."

Babyface Ray has been building a steady catalog for several years now. Plus, he's only getting sharper with every release like he’s got a point to prove. His 2021 album, Unfuckwitable, and the 2022 release of Face amplify that statement. Both of those efforts, led by tracks like "Paperwork Party (Remix)" with Jack Harlow and the Moneybagg Yo-assisted "If You Know You Know" on the former and "Sincerely Face" on the latter embody his trademark style, which pairs a talkative delivery and perspective of becoming a breadwinner.

According to the 31-year-old, Detroit-bred artists getting hit with the mainstream stamp of approval is a well-deserved win for everyone in his city. "The city has been seeing this work for a long time," Ray tells XXL during the Freshman shoot in mid-May. "What the world is seeing right now is what the city already saw. So for us to get this type of notoriety, it's like, they're glad we're here now type shit."

Now that he's earned a seat at the table, Babyface’s hunger still isn’t satisfied. "I really can't put no limit on it," he explains. "We're just going to keep reaching until we can't anymore, until it ain't no more that we can get. We ain't ever gonna stop."

From Detroit to the world. Watch Babyface Ray's 2022 XXL Freshman freestyle, powered by Puma, below.

Read the 2022 XXL Freshman cover story featuring BabyTron, Cochise, Saucy Santana, Babyface Ray, KenTheMan, SoFaygo, Big Scarr, Big30, KayCyy, Doechii, Kali and Nardo Wick when the Freshman issue hits newsstands everywhere on July 13. The issue includes additional interviews with Lupe Fiasco, Kevin Gates, Pi’erre Bourne, NLE Choppa, Yvngxchris, producer DJ Dahi, engineer Teezio and singer Chlöe, plus a breakdown of every Freshman Class from a numbers standpoint, a look back at what the 2021 XXL Freshman Class is doing, the story of why the 2016 XXL Freshman Class gets so much respect now, a deep dive into the world of NFTs through hip-hop’s lens and exploring rappers’ most valuable collections. You can also buy the 2022 XXL Freshman Class issue here.