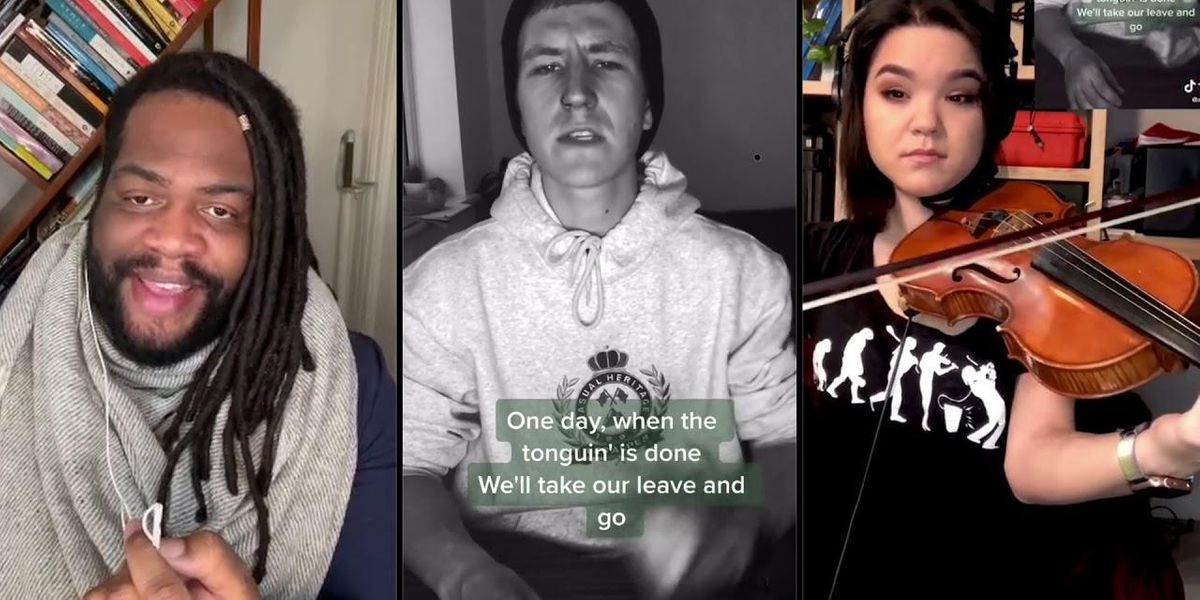 You may be aware that sea shanties have become very popular on TikTok.

So popular, in fact, that one of the more viral shanty singers on TikTok — Nathan Evans, whose rendition of “Soon May the Wellerman Come” spawned thousands of remixes and covers — just announced that he’s quitting his job after receiving a significant record deal.

Evans’ rendition of “Wellerman” began as a solo clip, and soon harmonizers, instrumentalists and producers jumped on the trend, turning the shanty into a raucous symphony.

Evans’ rendition of “Wellerman” is, of course, not the only sea shanty out there. As sea shanties have risen in popularity on TikTok, people have begun to edit and repurpose shanties into memes, rewriting Smash Mouth’s “All Star” and Nickelback’s “Rockstar” as shanties, adding dubstep beats, and acting out strange shanty-themed skits.

With great popularity, of course, comes questions — and scrutiny. Sea shanties are an ancient form of art, and while they were designed to be communal, they each come with their own implications, history, and nuance. Let’s take a deep, salty dive into the history of sea shanties.

As it often is with history, the origin point of sea shanties becomes murkier the closer you look at it. Sea shanties likely existed as far back as the 1400s, when they arose on tall merchant ships, but the word “shanty” originates from sometime in the mid-19th century, when shanties became most popular.

Shanties are generally described as work songs, sung by sailors and workers loading vessels. In general, shanties were used to make labor more efficient, as they helped workers find rhythm and synchronicity in their work. Shanties accompanied hard labor and were only sung during rhythmic, laborious work.

Early shanties generally flourished in the Atlantic merchant trade of the 19th century. Some were influenced by the call-and-response formats and rhythms of African work songs, which blended with Anglo-Irish lyrics to create the modern shanty.

Eventually, the arrival of steamships hailed the end of the heyday of the sea shanty. Of course, sea shanties continue to reappear thanks to the talented artists who revive them from time to time.

Artists like Cecil James Sharp played vital roles in chronicling the songs, so they weren’t permanently lost at sea. Sharp interviewed sailors in the late 1800s and transcribed the songs onto sheet music.

Today, shanties are often performed as entertainment in seaside pubs or even by touring musicians. The Menhaden Chanteyman, for example, are a group of former fishermen who began touring the US with their shanties in the 1980s.

There is a huge variety of sea shanties, but they’re generally divided into two main types: the Capstan Shanty and the Pulling Shanty.

The former is often sung to accompany rhythmic, cyclical work such as raising the anchor. These Capstan Shanties mostly existed to entertain the crew and so could involve any words or subject matter.

The Pulling Shanty, on the other hand, was more specialized, as it tended to accompany more irregular, arhythmic work such as hoisting sails. These shanties were important to keep sailors’ attention fixed on the task at hand, and they often involved call-and-response forms that had built-in gaps that would give sailors time to re-grip the rope in question, for example.


A Collection of Sea Shanties (vocal only)

And now for the burning question everyone is asking… Are sea shanties problematic?

Overall, it seems that the answer is no. Sea shanties are working songs, which exhausted sailors used to survive life spent on the sea working for massive corporations.

Still, some controversy has swirled around some of the songs — including the song that made Nathan Evans famous, “Wellerman.” Specifically, questions have arisen around its line “to bring us sugar and tea and rum.” Sugar, tea, and rum are staples of the North Atlantic Slave Trade.

But the general consensus is that “Wellerman” and other sea shanties associated with the slave trade were work songs sung by workers just trying to get through the day.

“It is apparent from an analysis of the lyrics that the song is neither a post-colonial type of critique nor an embrace of the exploitation of indigenous peoples or the slave trade,” writes David Mikkelson for The Conversation. “It can be seen as a genuine cultural expression by exploited workers for whom “sugar and tea and rum” provided a much-needed respite from the drudgery and toil of their daily lives.”

Sea shanties are definitely bound up in the history of Black music, and as Pooja Bhatia wrote for the London Review of Books, “It isn’t a coincidence that British sea shanties ‘bear striking resemblances to Caribbean slave songs.’ Indeed, the ‘very practice of shantying may have its roots in the interaction of sailors and black dockworkers.'” Sea shanties are perhaps great examples of how music can bridge cultures and encapsulate otherwise unrecorded experiences and relationships.

Sea shanties can, of course, be rowdy, but that’s part and parcel of their nature. In general, it seems the Internet has generally decided to spend time making fun of the idea of people who think sea shanties are problematic than vice versa.

Why Sea Shanties Are Relevant in 2021

There are lots of theories as to why ShantyTok has exploded so brilliantly in 2021.

Nathan Evans thinks the shanties have become popular because of how isolated people are feeling due to the pandemic. “Sea shanties were made to get people to join in, sing along, stamp their feet, clap their hands, keep the morale high,” he told NBC News.

“I think that in these times when everybody’s stuck at home, they’re quite down, it’s not been the best of times, so I think kind of in a weird way it cheers everybody up. … It makes everybody feel united,” he added.

“There is, nonetheless, real beauty in the chanteymen’s heavy, rhythmic singing, in the way the crew briefly blurred together, briefly becoming a single body,” she writes. “In a moment where we are looking for escape and communion wherever we can find it, #shanteytok, as it has come to be called, feels like a safe and welcome portal to anywhere but here.”

So at least while we’re all lost at sea, sea shanties can help us find some sense of rhythm and synchronicity as we sail on towards the horizon.