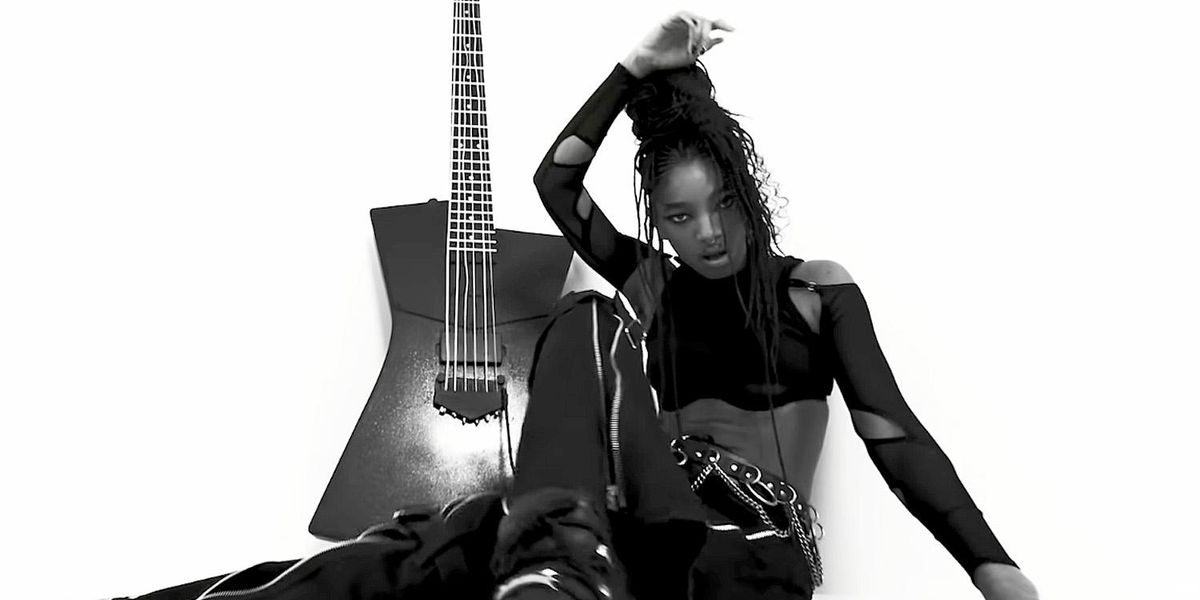 The song, stylized as “t r a n s p a r e n t s o u l,” is a departure from her previous, more psychedelic and soul influenced sound, which has garnered comparison to artists such as Erykah Badu and featured other artists like SZA. She has also leant her dreamy vocals to her brother’s more pared down tracks, bringing her floaty melodies and neo-soul vibes to their collaborations.

Her most recent track, however, is undeniably influenced by rock, pop-punk, and alternative music. It’s a bold, energetic sound led by electric guitars and Travis Barker — former drummer of Blink-182 and recent collaborator for musicians such as Machine Gun Kelly, Demi Lovato, and now Willow — on the drums.

“Transparent Soul” is a full teen-angst banger, the stuff of our adolescent dreams. As always, Willow delivered. With lyrics about “fake friends” and vanity, the track is the perfect balance of personal and social commentary without feeling preachy or overdone.

It’s the perfect pop-punk track that is part of the reemergence of the genre, which is being led by people who were young fans of the big names in the early 2010s and are now old enough to put their spin on it. While Pop-punk and alt-rock in its heyday was predominantly white and male, that is not the case in this iteration of the genre.

While there were some major female-led bands like Paramore and Black-led bands like Bad Brains, the new generation is full of diverse talent from marginalized backgrounds. As a genre that is known for expressing discontent and frustration with social norms, it’s fitting that marginalized communities are drawn to pop-punk — and now they’re leading its revival.

In particular, Black women are at the forefront and, just like Willow, blending personal experience, angst, and social commentary into provocative pop punk bangers. Here are some Black, female-led alternative bands you should have on your radar.

Meet Me @ the Altar

Meet Me @ the Altar got a lot of attention after the release of their single “Garden” in late 2020, but they’ve been around for a while. The three-piece WOC pop punk band formed in 2015 and dropped their debut EP, Bigger Than Me, in 2019. “Garden” gained attention for its vibrancy and positive lyrics, which can be a rarity in the pop-punk genre.

You can hear their inspiration from bands like Paramore, The Story So Far, and Belmont in their music, but their youthful sound comes in the form of their shameless optimism. Other bands make their name by being edgy, but Meet Me @ the Altar is more in the business of inspiration than misery.

Upon the release of Willow’s “Transparent Soul,” their fans immediately demanded a collab — which they sent out a plea for on their Twitter account.

Their newest track, “Hit Like a Girl,” was released in March 2021 as part of their prep for an album release that fans are eagerly awaiting.

Big Joanie is a London-based trio of Black Women who write about Black female friendships and sisterhood, the theme of their debut album, Sistahs. The celebration of Black joy we all need, they refer to themselves as “Black Feminist Sistah Punk,” and their sound has been described as a mix of “The Ronettes filtered through 80s DIY and 90s riot grrrl, with a sprinkling of dashikis.”

They are embedded in the London DIY music scene, which produces bands with unique sounds like their experimental mix of synths, heavy basslines, and vocals inspired by grunge, punk, and alt rock. They are influential to a lot of upcoming artists and have also gained online attention for their incredible, inventive cover of Solange’s “Cranes in the Sky.”

The Txlips are an Atlanta-based Black rock band who are enviably adept at spinning the sounds of jazz, classical music, calypso, neo-soul, R&B, and more into their token rock sound. Led by Guitar Gabby, the collective is changing the way game for Black femmes in music. They recognize the industry pressures for Black women to conform to “rap, hip-hop and hypersexualization,” but they resist the stereotypes and create music which is unapologetically complex and creative.

They also focus on advocating for Black and queer lives, donating proceeds from their music to causes they are passionate about.

Their most recent release, “We Get What You Deserve,” explores the political and personal, confronting white supremacy head-on and accompanied by a must-see provocative video. According to the band, “In ‘We Get What You Deserve,’ Pleasure Venom visually and sonically illustrates this eruption in a fast-paced montage of incendiary imagery overlaid by lead singer Audrey Campbell’s imploring shrieks to her congregation from her stage, her podium, her throne.”

The song starts with the proclamation, “Getting tired of living this sh*t,” and we agree.

The California-based band Squid Ink! are actively challenging anti-Blackness in punk-rock. Described as ” Black women and women of color, whose songs reflect the politicized nature of their marginalized identities,” for Squid Ink!, the personal is political, and it’s great fodder for great art.

The band mates all have diverse backgrounds and complex personal identities, which they bring to their music to address structural inequality in a way that is nuanced but direct. Songs like “Sundown” reference the sundown towns of the past in connection to gentrification now, and “Poetic Justice” is a self-aware track which contemplates their place in the world with existential urgency — both of which, and more, are available to support on Bandcamp.

Mint Green is a Boston-based band whose music is less rock-based and more indie-inspired. The perfect cross section of pop-punk and sad indie alternative music, they have been compared to artists from Paramore to Soccer Mommy. The sound that emerges is contemplative, provocative, and gorgeous.

Their most recent track, following their 2016 and 2018 EPs, was released in late 2020 and is called “Changing.” Like all of us, Mint Green are Phoebe Bridgers stans, so they released a two-song EP of Phoebe covers.

Proper. are tuned into the essential parts of all good pop punk and alternative music: writing songs about feeling sad and feeling excluded. Their two albums, 2017’s The Suburbs Have Ruined My Life and 2019’s I Spent The Winter Writing Songs About Getting Better, speak directly to the anxieties and loneliness of exclusion, especially as Black punk fans,

The Brooklyn-based trio blend their evocative instrumentation with their honest lyrics, which unravel their emotions to create music that is both artful and anti-racist. Their newest single is called “Aficionado” and is available on all streaming platforms