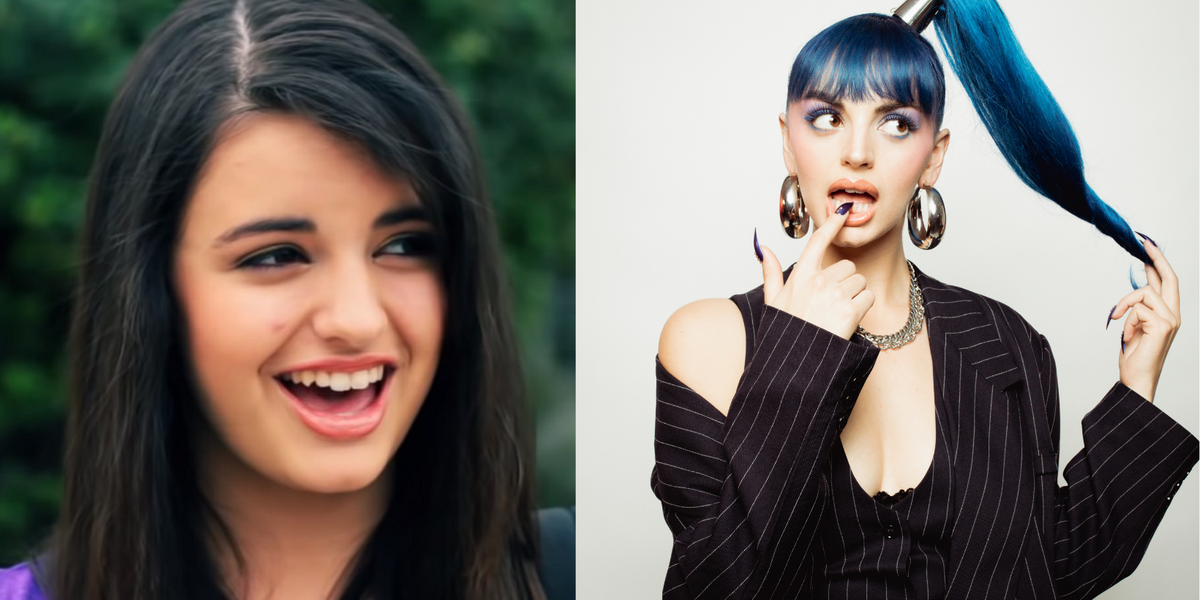 If you’re a millennial or older Gen-Z, chances are your cerebral wiring was at least temporarily short-circuited by the unshakeable refrain: “It’s Friday, Friday / Gotta get down on Friday.”

It was everywhere. Everyone you knew was singing it in the cafeteria and laughing. It was on the radio. Frankly, it was probably stuck in your head for the entirety of junior high.

And it was all because in 2011 a girl named Rebecca Black released a maddeningly catchy song with an accompanying music video called “Friday.”

Little did the then-13-year-old know, her attempt at a benign pop song would soon become a viral sensation (or laughing stock, depending on your perspective), earning over 150 million views on YouTube and becoming the fastest-growing viral song and video in 2011, ranking No. 1 on YouTube, Billboard’s Heatseekers chart, and the Google Zeitgeist.

“Friday” was born, essentially, from a rich kid’s whim. Black’s mother, Georgina Kelly, hired ARK Music Factory in California to make a song and accompanying video for Rebecca, paying the company $4,000 to fulfill her tween daughter’s dream of playing a pop star.

The song, written by Patrice Wilson, co-founder of ARK Music Factory, was certainly not a feat of extreme passion or musical inspiration on anyone’s part. Wilson explained that he “wrote the lyrics on a Thursday night going into a Friday. I was writing different songs all night and was like, ‘Wow, I’ve been up a long time and it’s Friday.’ And I was like, wow, it is Friday!”

After production, the song was quietly released on Youtube in February of 2011. But shortly after, Black was shocked to wake up one morning to find that the video had exploded in views overnight. “Friday” first came to the world’s attention thanks to a slot on Mystery Science Theater 3000 from Rifftrax comedian Michael J. Nelson, who featured it on his show and called it “the worst video ever made.” The bizarre and often inexplicable effect of social media virality took over from there, with users on Twitter and Facebook sharing the video far and wide.

At the beginning, it’s fair to say that almost no one was watching the video or listening to the song in an earnest way. The fervor surrounding Black and “Friday” began as mean-spirited, with internet trolls mocking her incessantly online. From there, irony took over, and teens were blasting the song from their cars and setting it as their ringtones as a sort of act of ironic virtue-signaling, trying to prove to each other that they were in on some existential joke.

While it was certainly an interesting cultural moment — and one of the first examples of an internet meme with true staying power — it was a difficult time for Rebecca Black. “I became unbelievably depressed and trapped in this body of what I thought the world would see me as forever when I hadn’t even finished growing,” she told Good Morning America in an exclusive interview.

“Having people tell you that you don’t belong where you want to be, that you should kill yourself … Having to then, like, reflect on all of that as a teenager is an unbelievable experience,” she said.

Needless to say, Black had only ever meant for the song to be cheerful and catchy and had anticipated the video only being viewed by friends and family. When it unexpectedly blew up, she wasn’t in on the joke and she knew it. “Very few people were laughing with me,” she said in a Buzzfeed interview.

In many ways, life for any adolescent in the 2010’s was not dissimilar to Rebecca Black’s specific experience. Most of us emerged from childhood not fully grasping the true shape of the world we were entering.

Millennials were alive for 9/11 and the Great Recession, sure, but we were a bit too young to recognize the general nihilism those global events had created. We didn’t yet recognize that the world we thought we were owed didn’t even exist anymore.

We were hopeful children who quickly became depressed, apathetic teenagers.

By 2011 the American dream had already been revealed to be a hollow lie, but the social progress we’re still struggling with today had yet to rear its head in any impactful way for your average suburban tween. While tweens in 2021 are respecting each other’s pronouns and going to protests, those of us who were thirteen in 2011 were cutting our hair into side bangs, using “gay” to mean bad, and generally making each other’s lives miserable to try to assuage our own feelings of lostness.

Most of us young millennials had a scarring moment in early adolescence (if not several) in which we expressed ourselves earnestly and hopefully, only to be rebuffed and laughed at for our naïveté. For Rebecca Black, that moment took place in front of the entire world. All she ever wanted to do was make a fun music video with her friends, and as a result she was laughed at by millions of insecure teenagers and adults for having the gall to express the simple, unironic pleasure of Fridays.

So what’s become of Rebecca Black?

Well, she responded to her experience how most of us responded to the trauma of adolescence: She decided to be in on the joke.

If there’s one thing you can count on about millennials, it’s that they cringe at earnestness and lean into absurdity. We fear true vulnerability but also crave it, so we put up shields of difficult-to-explain memes, like “Jeffrey Epstein didn’t kill himself,” and lean into irony burnout so poignant that we don’t even know when we’re joking anymore.

We want to expose ourselves, we want to be seen, but we can only bear to do it through distorted lenses that tell our audiences, “Don’t take this seriously..unless you like it. But still. I’m probably kidding.”

And on the 10th anniversary of “Friday,” Rebecca Black released a remix of her infamous song that does just that.

The remix, produced by Dylan Brady of 100 gecs, features vocals from Big Freedia. It also features pop music agitator Dorian Electra — who featured Black on their 2020 release “Edgelord” and honored her in their lyrics, “[a song that] defined an era, and changed the music industry;” alongside house party favorites 3OH!3.

The video takes the imagery of the original music video and completely subverts it into something nightmarish, surreal, neon, and gender-bending. If the 2011 video is a laughably innocent suburban middle-schooler, this video is an aging and nihilistic Brooklyn drag queen with a taste for bad cocaine and leopard print.

This music video has no hope of future home ownership, knows that climate catastrophe is imminent, distrusts the nuclear family, and probably doesn’t have healthcare but does have a mild Adderall addiction.

And unlike the sugary-sweet 2011 version, Rebecca Black fully intended for the remix to express all the technologically-bloated chaos, performativity, and existential dread of the current era. In fact, given that she spends much of the video sharing a car with rage faces (a popular early 2010’s meme), it’s clear that Black is embracing that the meme of Rebecca Black will always be more real to most people than Rebecca Black the individual ever could be. She said of the video: “‘Friday’ has this accidental campiness that was a part of making it what it was, and through the years, camp has been something I’ve only further tried to embrace.”

In taking the very thing that damaged and defined her for so long and extracting the qualities that made it laughable — its campiness — and then manipulating and inflating those qualities into something overt that she could control, Rebecca Black has managed to fulfill her destiny as a millennial-Gen-Z cusp.

All of us, on some level, are simply trying to mold our teenage selves into someone less vulnerable and more in control. And in a chaotic world, intentional absurdity is the only way to really take that power back.

Summarily, the two videos side by side are the most stirring artistic expression of the millennial experience that our culture has managed to produce. If you don’t think this is brilliant, earth-shattering art, then you’re wrong.

It’s fair to say that Rebecca Black is now not only in on the joke, but you may not even be cool enough to laugh along with her.