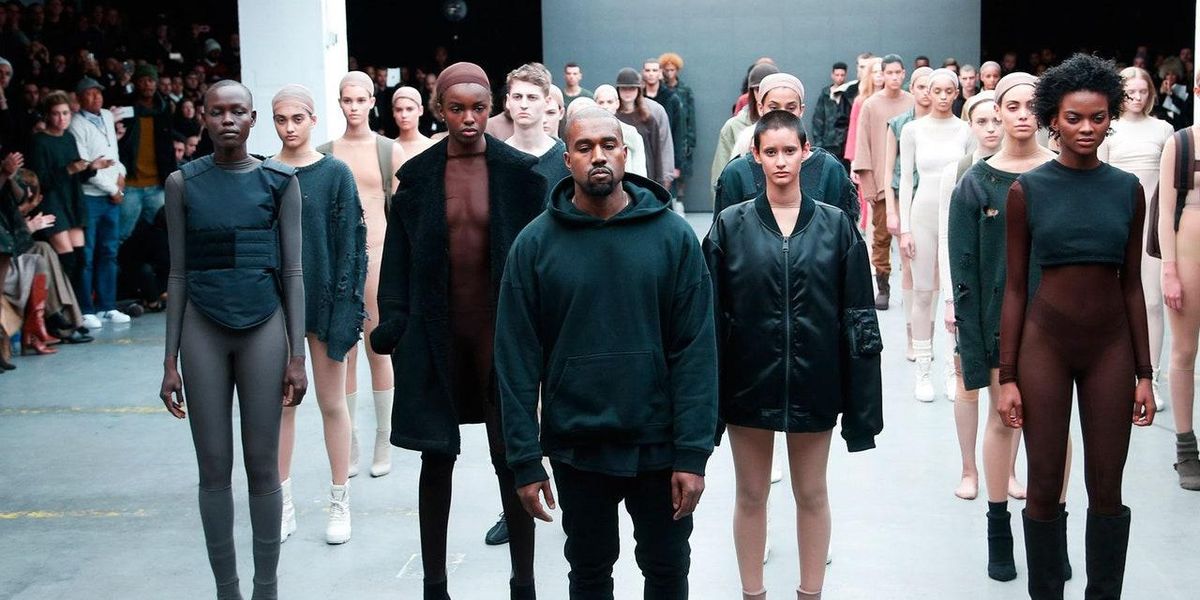 For a high valued, youth-targeted, celebrity-run brand, Kanye West’s Yeezy has been noticeably devoid of logos.

Despite the contemporary trend toward logomania — which is only going to get more pronounced post-pandemic if recent fashion shows like Gucci’s recent anniversary show, which included a host of Gucci x Balenciaga logo-ridden garments, are anything to go by — Yeezy has found both success and distinction without any cohesive branding.

The label trends towards the minimal, creating oversized yet structured silhouettes in muted tones like “sand” and “cement.” Much of its success is attributed to Kanye’s own status — a pair of his Grammy-worn shoes just sold for a new record of $1.8 million at Sotheby’s on April 26th — but it’s not just Kanye fanatics who clamor for Yeezys, as the brand has become the epitome of cool.

While the brand is most famous for its recognizable shoe partnership with Adidas, which does include some cobranded apparel pieces which usually don the word “Calabasas” after his old neighborhood (the rapper has now relocated to his Wyoming ranch), Yeezy is putting more emphasis on its non-shoe ventures going forward, and as a result the company is in the process of creating a logo.

Until now, Yeezy clothes have fallen into two categories: basics only discernible as Yeezy based on their shape or if recognized from a Kardashian Instagram post; and Kanye West merch. The most distinct pieces by the brand include the iconic 2016 Life of Pablo-inspired merch (in hindsight, this era was the beginning of the end), a recent collection of sweats adorned with Jesus-inspired slogans from around the time of his Sunday Service run, and (who can forget) the “Kanye For President” apparel.

But Kanye has bigger dreams for his label than just tour-like merch — dreams which we can only hope will distract him from running for president again… though unfortunately the damage has been done and he seems to have inspired Caitlyn Jenner to make her political bid.

The brand is set to launch their long-term partnership with Gap, which, if valued correctly, will make up billions of Kanye’s net worth. The highly anticipated collaboration will make Yeezy style clothing more accessible, and launch a new era of the brand.

The collection will expand from the signature streetwear basics that Yeezy is known for into more mainstream basics like puffer jackets, bags, and even khakis (the Gap will do what the Gap does). The muted tones that characterize the rapper’s aesthetic seem to have been turned up for this collaboration, judging by early images shared by West and others.

Though these mock-ups suggest that the partnership will also be brandless, again counting on advertising and pedigree to make the products recognizable instead of classic logos, Yeezy is not forgoing the idea of a logo altogether.

In preparation for even more opportunities and design plans in the future, Yeezy LLC started trademarking its new logo: a deconstructed sunray comprised of eight dotted lines. In their application, Yeezy LLC stated that the design, “eight dotted lines, each comprising three totally shaded circles, with a total of 24 circles, arranged at equal angles as rays from a sun,” would be used on everything from “clothing and retail store services, and musical sound recordings and streaming to hotel services and the construction of ‘non-metal modular homes,’ among other things.”

However, Walmart quickly swooped in to try to stop them.

On April 21st, Walmart filed a notice of opposition with the Trademark Trial and Appeal Board, claiming that Yeezy’s proposed logo would result in damages to them. They argued that their own logo is remarkably similar, self-describing the Walmart logo as “a design of six rays symmetrically centered around a circle.”

Essentially, Walmart is arguing that, since they use their logo in connection to the items, products, and services described in the Yeezy application, there is likely to be confusion between the two. What’s more juicy, is that Walmart argues that Yeezy using a similar logo would devalue their own.

Their statement argues that the Yeezy trademark “is likely to cause, and will cause, dilution of the distinctive value of” Walmart’s mark, since it is “a distinctive and famous trademark which became famous prior to the filing date of [Yeezy LLC’s] trademark application.”

While partly this is just business on Walmart’s end, having a large-scale brand working in partnership with another large-scale brand like the Gap, which could be considered a competitor in some sectors, using the same logo is not a good look.

However, it’s interesting to wonder if the second half of the filing could be considered a dig at the famously controversial figure of Kanye West. Walmart has had its share of controversies, like its billionaire owners who don’t pay their employees well, and yet they market themselves as a store for everyone and everything.

West’s brand is so closely tied to his persona that Walmart might fear Kanye’s turbulence could do harm if associated in any capacity with it. Big brands have often unleashed lawsuit and defamation claims when harmed by the branding of celebrities — take Nike’s recent lawsuit with MSCHF over the Lil Nas X collaboration of the “Satan Shoes.”

In Nike vs MSCHF, the shoe conglomerate made similar claims about confusion and dilution of the brand following some people’s misunderstanding of the brand’s involvement in the collab — which was nonexistent.

In this case, Walmart is covering their bases in a blanket way, but could be trying to protect themselves from any Kanye-related fallout that could come in a case of mistaken identity.