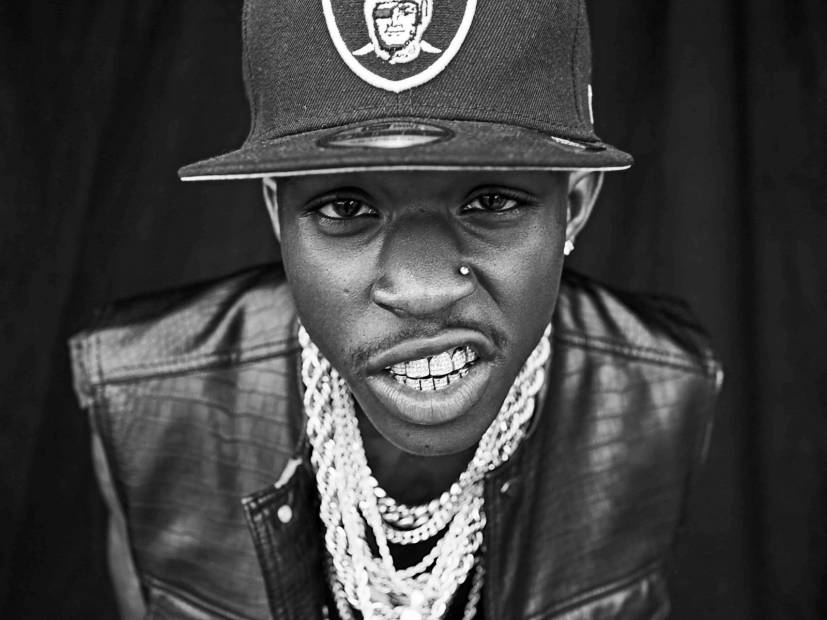 New York, NY – For a 21-year-old like Quando Rondo, the world is a vast place that will throw different experiences at him. Those things that he’ll come across will not only test him but also have him change his views on life. One of those experiences he’s already encountered is becoming a father.

The rapper recently welcomed a newborn baby girl into the world and he’s already taking on the role of a firm patriarch. He’s shielding his child from anything that’ll influence her in any negative or positive way, including his own parents.

It’s not that he wants to dictate and control his daughter, he just believes that people who want to be apart of a child’s life that isn’t it’s parents aren’t helping the child come into their own.

GroovyTracks: Do you have a strong faith in God?

Quando Rondo: I have a strong faith in God but I really don’t believe in God. A lot of people don’t even know how they believe in God. They go off with their mother taking them to church every Sunday and are told to pray. That’s your God because your mother told you that? My daughter can believe in anything she wants except Satan because it’s on her. That’s a reason why I’m not letting my mother or father meet my child. I really don’t want anything screwing up my daughter’s head. She’s my daughter and this is what I want to do and nobody is going to tell me what to do with my daughter.

GroovyTracks: What does having a daughter mean to you?

Quando Rondo: I’m not going to lie, we’re men and we don’t necessarily carry kids even though we really do. This is how I think about all of it. If a woman were to walk in here and say her cousin died and she was crying, another woman would try to hug her and shit. Me and you are going to be like damn that’s fucked up but as soon as we walk out the door we’re not going to care because that’s not our people. We niggas that are built for tough situations and girls are more sensitive and they bitch about carrying a baby for nine months but we’ve been carrying babies since forever.

When a female carries another life it makes them appreciate their life and understand it way more because they have a whole other life on their hands. I feel like having a baby makes a nigga more dangerous because I’ve always been on some “fuck them niggas” shit but now, if somebody does something to my daughter, I’m going to kill them with no remorse. When I met my girl I grew a love for her because at first she was just a bitch and hoe but now I love her. With my daughter, I never had the chance to think about if I love her. It was just an automatic love, you feel what I’m saying? It’s not a love you feel it’s like shit this is my daughter. This is my baby and my child. I have no choice but to love her.

GroovyTracks: How would you describe your grind and hustle now that you have a newborn daughter?

Quando Rondo: Big bro I look at everything like the streets because this shit is like selling weed or crack on the corner. You’re not about to start selling crack today and go from a nickel and dime to 30 bricks in two weeks. You have to learn the game.

GroovyTracks: Do you think having your daughter will get you on the right path? Looking at everything like the streets isn’t the most ideal way to go about things.

You turn yo bacc on me ! #4KTTILLTHEDAYILAY

GroovyTracks: What consequences do you think will have you finally leave that mindset behind?

Quando Rondo: That’s the thing big bro. I’m trying to live life without having bad consequences. I just feel like I have to get a little older. I’m a young nigga and I’m not about to let anyone voice their opinion in my head and tell me this is what I need to do. You are trying to tell me that because this is the shit you should’ve done that now you are at the age where you wish you would’ve done that. Man, fuck all that. If I want to go spend $100,000 on a watch that’s what I’m going to do. Just because you spent $100,000 on a house why the fuck do I need to do that? You say it’s going to help me in the long run but nigga I don’t plan on going broke or having a fucked up future like you. I will probably have a whole bunch of my own shit going on. I’m on my own shit and I’m going to do what I want to do.

GroovyTracks: If there was a letter you’d write to yourself 10 years from now what would it say?

Quando Rondo: So all the hoes that are groupies right now, I’m going to get their social security number and I’m going to write it on a letter. I’m going to come back to it 10 or 20 years later and I’m going to scam their ass [laughs]. I’m serious too. I want to write a letter that tells me to make sure my pants are pulled up and shirt tucked in whenever I do a meeting too [laughs].

Check back for more GroovyTracks and Quando Rondo content here and here.