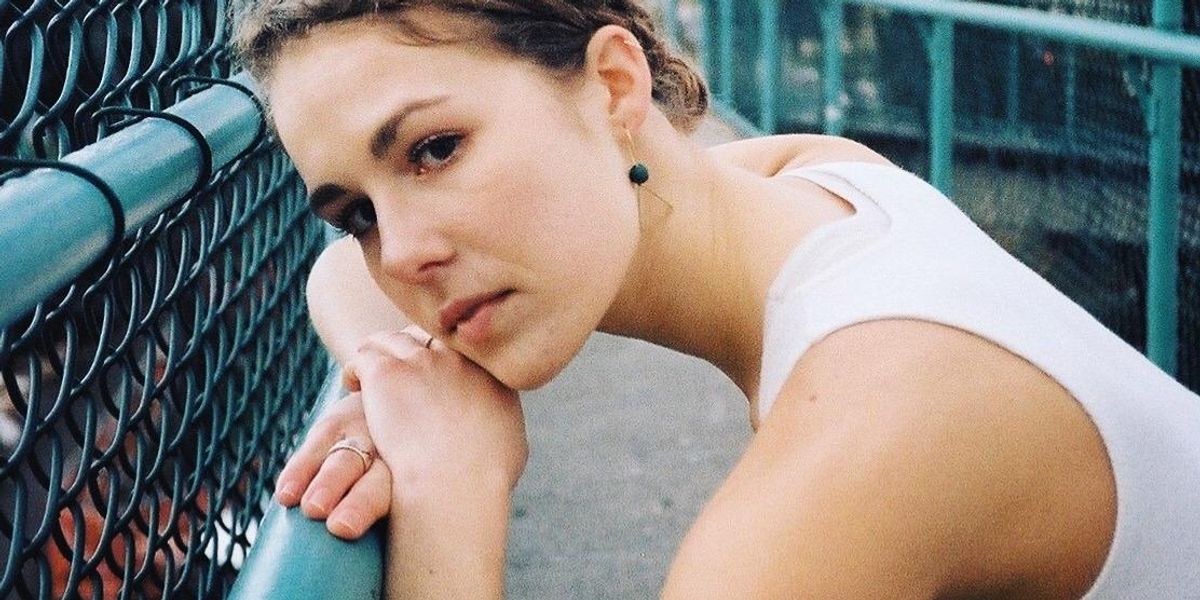 Now, the Vancouver artist is back with a new video for one of the album’s standout tracks, “Masquerade” — a super sticky, super bittersweet bop about growing up and reassessing someone you once admired.

“The song is about those moments in childhood where you’re jolted out of innocence and suddenly realize that the world around you is unstable, or that your heroes are just people,” Slinger tells Popdust. “I’m reflecting on an experience like this in my own life and coming to peace with it.”

Slinger’s “Masquerade” video is an all-night-long sugar rush that takes place in an empty theme park. “My director [Miranda MacDougall] and I wanted to have some childhood/coming-of-age nostalgia within the imagery to nod to the lyrical content of the song, but then also show me as a more mature narrator,” says Slinger. “The juxtaposition of the many bright arcade locations and the dark, cavernous room where I’m alone work perfectly to show off the complicated feelings I have about getting older.”

The video was shot at a local amusement park and shows Slinger driving a go-kart, playing arcade games, and grooving on a mini golf course with her squad. In another thread, Slinger plays her older, wiser self, clad in a chic black jacket.

“We initially were planning this video at the start of COVID, when we thought we’d be able to gather in big groups in no time,” recalls Slinger. “We had to pivot the concept when we realized that wasn’t possible, and my team ended up securing Castle Fun Park for an overnight shoot. It’s this wacky place where I probably went for a field trip growing up about an hour outside of Vancouver. We started shooting at 9 PM [and] I managed to crawl into my bed back in Vancouver at 8 AM… It was wild and fun and exhausting!”

“Masquerade” is the first true song on Panorama, following an intro called “Ted, on Dreams.” Slinger says the whole project took her several years to complete.

“Since this is my first project, it’s really me catching everybody up on all the artistic development and writing I’ve been doing over the course of my life,” she explains. “A few songs were written for an unreleased EP I made as an independent artist back in 2019 with Louise Burns, one of my co-writers and producers. I kept writing a ton that year, including self-producing demos for the first time, and then signed with 604 Records to make Panorama. It’s special for me to have some songs on the album that were written earlier, just me and my guitar, right alongside tracks where some of my GarageBand programming is on the final version.”

Slinger’s other main Panorama collaborator is Kevvy, who’s best known for his writing and production work with Carly Rae Jepsen. According to Slinger, she met Burns and Kevvy “at a songwriting showcase I had performed at where they were on the mentorship panel.”

“I learned so much about myself making this album, especially as we planned the release entirely in the pandemic,” Slinger shares. “I’ve realized that I can be impatient when it comes to growth and metrics, especially in an industry where you feel pressure to be creating and hustling 24/7. I have to constantly remind myself that the foundational reason for pursuing music is just that: making art. Anything else is a bonus. Also, it’s so crucial to have good people around you that you can trust, because even still—no one will ever care as much about my vision or music as I do.”

At the end of the day, Slinger wants her music to capture the vast, sometimes contradictory feelings of adolescence, which is exactly what “Masquerade” does so well.

“I hope that the album stretches listeners to feel many things at once,” Slinger says of Panorama as a whole. “I love packaging melancholic, reflective lyrics into a catchy pop song format, and enjoy the thought of people having different experiences depending on which part they focus on.”

Check out the Vancouver singer-songwriter’s new “Masquerade” video below.

Panorama is out now via 604 Records.