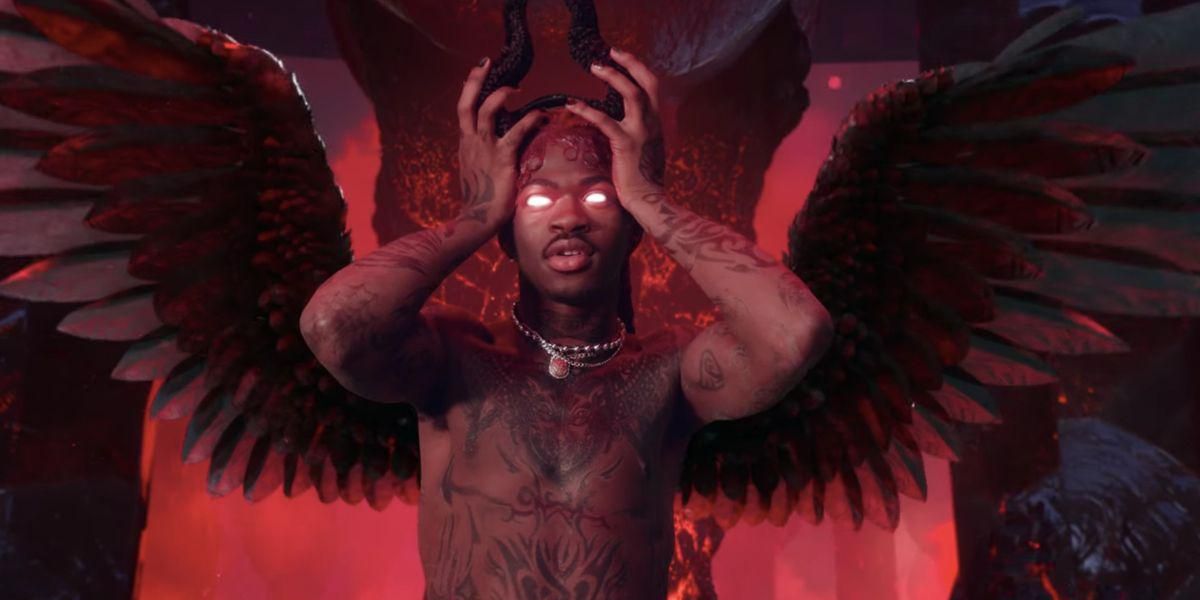 After almost a year of teasing his latest single “MONTERO (Call Me By Your Name),” Lil Nas X finally released the song — with an accompanying video which has sent the internet ablaze.

Known for breaking boundaries and taking risks, Nas has done it again with a release that no one could have predicted. If we had each spent all of our free time since he first teased the song in July 2020 trying to predict what would unfold, no one could have imagined he’d be sliding down a stripper pole into hell to give the devil a lap dance.

But that’s exactly what goes down.

The long awaited “Call Me by Your Name” was in part so anticipated because of its title. A reference to the tantalizing novel and film starring Hollywood golden boy Timothee Chalamet, the title left fans eager to see what Nas would excavate from the cultural phenomenon and, considering his style, how he would make it his own.

Even the author of the hit novel Call Me by Your Name, Andre Aciman, is a fan. “If Call Me by Your Name had even the slightest influence on Lil Nas X’s music, then that’s beyond anything I could have ever imagined or hoped for,” Aciman told them. “It’s gratifying, it’s humbling, and it reminds me that how others relate to and interpret this novel is often more meaningful than the actual words on the page.”

Though the song title and lyrics have nothing to do with the actual book or movie, as Nas has since clarified (probably for, like, legal reasons), if fans were looking for something unapologetically queer, Nas delivered.

The song’s official title, “MONTERO,” is a reference to Lil Nas X’s government name, Montero Lamar Hill. The juxtaposition of Nas’s real name and the command “call me by your name” gives a glimpse at the undercurrents of the song: a desire for intimacy and honesty mixed with a desire to please and, in some ways, be the guy he wants.

But despite the subtlety in which these complex themes play out in real life (and in the titular story), the video unfolds in a provocative fantasy world that blends biblical and historical references with pop culture and dreamlike imagery to make something wholly unique.

The video starts with a monologue that describes Montero, a utopia where people can express themselves. “In life, we hide the parts of ourselves we don’t want the world to see. We hide them away. We tell them no. We banish them,” Nas’s voice begins as we flie over a pink and purple-hued dreamworld filled with Greco-Roman architecture (foreshadowing later in the video) amongst flowers and lakes.

“But here, we don’t,” the voiceover continues. “Welcome to Montero.” Nas sits beneath a tree in the Edenic paradise as a serpentine figure (also played by Nas) looks on. The figure seduces Nas, setting off a chain of events that take him from Eden to stand trial in front of a high court in front of identical versions of himself wearing blue, powdered, Marie Antoinette-style wigs as a crowd watches on from a Coliseum (the Greco-Roman references return.)

While standing trial, Nas is stoned, and his consciousness tries to ascend to approach a vague angelic figure in the sky but, instead of reaching it, he finds himself sliding down a stripper pole into hell to give Satan a lap dance. The video ends with him killing the devil and adorning himself with the devil’s horns

The wild ride of the video is dense and thrilling — prompting you to take a second, third, and fourth look to unravel what you just experienced.

In a press statement, Columbia Records described the thematic concept of the song and video as an answer to the question: “Do you truly love your neighbor as yourself, enough to call them by your own name?”

Though this feels like a highly sanitized version of what went on in that video, the salacious spectacle is not gratuitous — it does have complexity and depth.

Nas’s own statement is confessional, giving insight to the personal depth behind not just the song but his own experience grappling with his sexuality. Penned as a letter to himself, addressed to Montero, the letter is reminiscent of Frank Ocean’s similar move — before releasing Channel Orange, Frank came out on Tumblr in a letter to his old self, using his old name.

Nas shared: “i wrote a song with our name in it. it’s about a guy i met last summer. i know we promised to never come out publicly, i know we promised never to be ‘that’ type of gay person, i know we promised to die with the secret, but this will open doors for many other queer people to simply exist. you see this is very scary for me, people will be angry, they will say i’m pushing an agenda. but the truth is, i am. the agenda to make people stay the f**k out of other people’s lives and stop dictating who they should be. sending you love from the future.”

With “MONTERO,” Nas is creating a better future. Unabashedly pushing against stereotypes, breaking boundaries, and embracing aspects of himself he once considered shameful, the video sees Nas at his most brave and most free — giving his fans the courage to do the same.

The song’s lyrics speak of a relationship bound by secrecy and imbued with shame, but there is no shame left here. By becoming the devil at the end, Nas shows his willingness to become the so called “devil” if that’s the price of honesty and freedom.

Lil Nas X sliding down a pole to give satan a lap dance will do far less to harm children than theologies that make… https://t.co/vXpSkOi6Fg

A far cry from the commercial anthem and (mostly) kid friendly anthem of “Old Town Road,” some have taken issue with the blatant messaging in Nas’s new video, in his “agenda”; but, based on his statement and his social media clapbacks to homophobic jokes, he is ready for the criticism.

Lil Nas X has become a cultural icon with his internet presence and bold fashion choices, and “MONTERO (Call Me by Your Name)” proves that he didn’t peak with “Old Town Road” and will continue to be a musical icon, too.

The next phase of Lil Nas X promises to be similarly unapologetic and “expressive,” as he described the song. His upcoming album is also named Montero; and if this is anything to go by, it will be filled with innovative anthems for days.