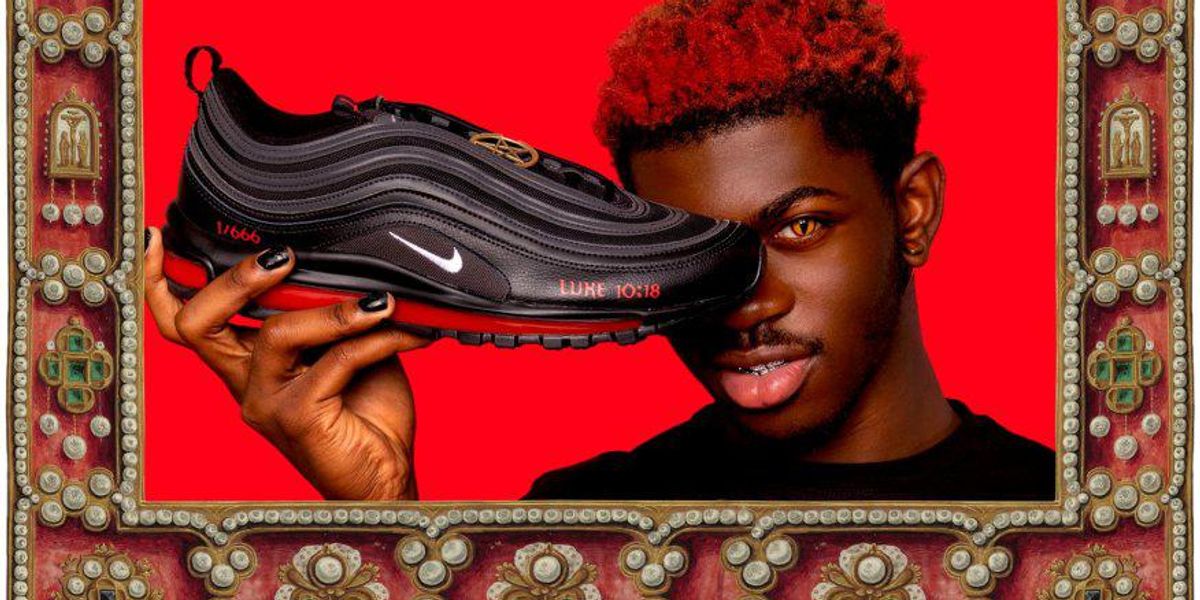 After the success of his most recent single “MONTERO (Call Me by Your Name),” a provocative hit about clandestine queer love affairs, Lil Nas X is releasing a shoe collaboration with the Brooklyn based brand MSCHF: customized Nikes called “Satan Shoes.”

The controversial music video for “MONTERO” has garnered millions of views in just days and generated conversation that set the internet ablaze. Amidst positive feedback for the video’s complex concept and message of self-acceptance, there was a barrage of criticism for the themes and imagery in the video — namely the scenes at the end which feature Lil Nas X sliding down a stripper pole into hell to give a lap dance to the devil.

Despite being called “satanic” and “heretic” by everyone from random Twitter users and Clubhouse groups to prominent conservative pastors and government officials, Lil Nas X spent the weekend unfazed. Stoking the flames, he and MSCHF announced their collaboration on the sneakers, which seem to tie into the imagery in his video, to similar criticism.

The sneakers are customized Nike Air Max 97s, personalized by the MSCHF team with … their own blood. About six members of the MSCHF team donated the blood that was then mixed with 60cc ink and put into the signature “bubbles” that characterize Air Max sneakers.

The sneakers also feature a golden pentagram ornament and a reference to the bible verse Luke 10:18, which reads: “I saw Satan fall like lightning from heaven.” Only 666 pairs were made, each one individually numbered, and the exclusive drop is happening March 29, 2021.

Want to cop? They’ll set you back $1,018 (another reference to the same bible verse) — which is about the same price as an Off White Nike Jordan collab on the resale market and a sizable chunk of your stimulus check.

MSCHF is known for their controversial customizations. The “Satan Shoes” are a follow up to the brand’s “Jesus Shoes,” which were among the most Googled shoes of 2019. That version of their customized white Nike Air Max 97s came with a Jesus pendant and “holy water” from the River Jordan in the bubbles so wearers could literally walk on water (without having to resort to Kanye West level theatrics).

Selling for $1425 and reselling for up to $4,000, the Jesus sneakers were all over the internet and even spotted on Drake. According to the New York Times, upon the release of the Jesus Shoes, “The only thing that didn’t happen, said Kevin Wiesner, 27, a creative director at MSCHF, was a public disavowal of the shoes by Nike or the Vatican.”

“That would’ve been rad,” Wiesner said. And it seems he got his wish.

Following the immediate criticism of the follow-up Satan Shoes, Nike made sure to distance themselves from MSCHF and their release. A rep from Nike was adamant that the company was not involved with the shoe in a statement to NBC, saying: “We do not have a relationship with Little Nas X or MSCHF … Nike did not design or release these shoes and we do not endorse them.”

No doubt, a victory cry rose up from the Brooklyn Warehouse that houses MSCHF when Nike’s statement hit the internet. And no doubt the outrage generated by their shoes is fueling their fire.

When the Jesus shoes sparked controversy, MSCHF co-founder Daniel Greenberg told Insider last year, “If we can make people a fan of the brand and not the product, we can do whatever… We build what we want. We don’t care.”

As their name suggests, the brand, also known as a “collective,” pride themselves in releasing esoteric products and content that feel like a less-awful version of the edge-lord corners of the internet in 2013. They thrive firmly in the realm of chaotic neutral, feeding off the media speculation and intrigue that surrounds their drops.

It makes sense, then, why Lil Nas X was the perfect collaborator. It is unclear whether Nas was involved in the process of the shoemaking or if, with the benefit of serendipitous timing, MSCHF reached out to him after watching the “MONTERO” video to help them announce the release, but it seems to be a match made in heaven.

Nas has also been reveling in the controversy of both his music video and, now, the shoes. Famous for his Twitter comebacks, Nas did not hold back when public figures slammed him with a relentless barrage of criticism over the weekend.

i thought y’all didn’t like political correctness. what happened? 😫😢

Among those outraged by the shoes was Governor Kristi Noem of South Dakota, who was attempting to dissuade people from buying the shoes for their exclusivity. Not even entertaining her rhetoric, Nas pointed out that, as a Governor in a country which is objectively in shambles, Miss Kristi might have other things she could have been doing with her time.

ur a whole governor and u on here tweeting about some damn shoes. do ur job! https://t.co/qaor6W0B9C

After going head-to-head with his haters on the timeline, Nas posted a video to his YouTube channel in classic influencer apology style. The video, titled “Lil Nas X Apologizes for Satan Shoe” started with Nas seemingly about to apologize, before cutting off to play a clip from the MONTERO video.

Nas kept up the sarcastic, faux-remorse on Twitter, saying he would release a Chick-fil-A shoe next to “even the score.”

we have decided to drop these to even the score. damn y’all happy now? https://t.co/RGpCiiRbGb

For both the sneaker collaboration and the video, critics have accused Nas of promoting “Satanism.” Many, including prominent rappers like Joyner Lucas, have been focused on the messages they perceive Nas to be pushing onto children.

After the viral success of his chart topping “Old Town Road,” Nas garnered a wide fan base which seemingly included … everybody. Children were singing the song in schools, and it was playing on mainstream radio and viral on TikTok. But Nas doesn’t exactly know why, given the song isn’t exactly clean. What’s more, he never asked for it.

there was no system involved. i made the decision to create the music video. i am an adult. i am not gonna spend my… https://t.co/0urenpuiFK

Lil Nas X wants to be a role model, but not in the way conservative public figures want him to be. As part of his evolution as an artist, Nas has made his queerness part of his work. He came out in a Tweet about his song “C7osure,” which he released during Pride Month, so, given his trajectory and his internet presence, it makes sense that his next phase of artistic expression would be unapologetic about his sexuality.

And despite claims that he took it too far and is being antagonistic, Nas has been clear that the messaging the video is pushing is one that is for self acceptance and against hate.

In a poignant statement tweeted between jokes and clapbacks, Nas sent a poignant message to anybody offended by his unrestrained freedom: “i hope u are mad, stay mad, feel the same anger you teach us to have towards ourselves.”

While the Satan Shoes are a provocative collaboration with a brand known for its gimmicks, the boundary pushing that defines Nas is less gratuitous. Instead, even between making jokes and retweeting memes, he’s advocating for a more accepting, inclusive world.