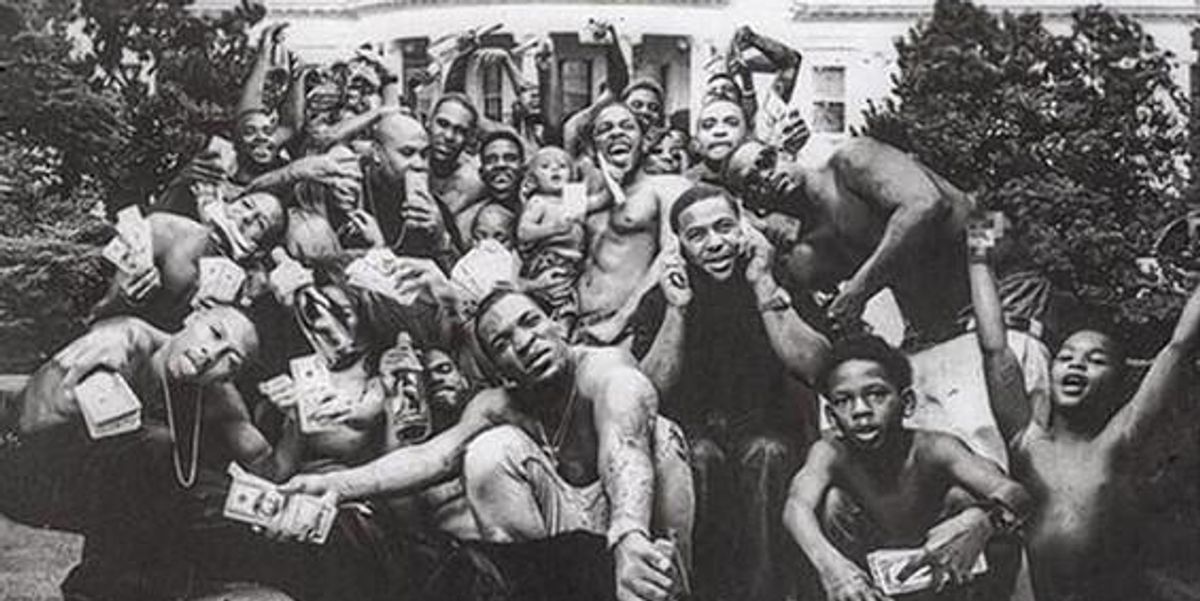 Hearing To Pimp a Butterfly for the first time was revelatory.

From the symphonic production to the dynamic, energetic rap flow, Kendrick did not pull any punches. Undeniably a work of protest, the dense theatre of the album hit hard, imbued with equal parts mournfulness and hope.

The album’s lead single, “i,” might have showed off Kendrick’s ability to write an anthem, and even drew some skepticism from fans who thought its upbeat optimism was indicative of a pivot to more palatable work than his heavily artistic good kid, m.A.A.d city, but the album that followed it was unprecedented.

And though the album has been mythicized as an inextricable part of its moment, which in some ways it was, it has also managed to pass the test of time and has maintained its relevance years later in a completely different political and artistic landscape.

To Pimp a Butterfly came after an avalanche of tragedy and amidst a relentless news cycle full of death and disappointment. The summer preceding its release had seen nationwide protests and unrest following the murders of Eric Garner, Mike Brown, and Tamir Rice — the most high profile amongst many other victims of police brutality — which spurred multiple waves of protest in response to the injustice of the murders and the nonexistent indictments of the officers responsible.

The energy behind the Black Lives Matter movement that came from those protests was akin to the energy that manifested in the summer of 2020. Though the political landscape has changed drastically since 2015 — when TPAB was released, Obama was still firmly in office and we all still thought Hillary would be the next president with no clue about the horror show of the Trump Presidency, nevermind the … global pandemic — the album feels as immediate as it did then, especially given the resurgent focus on the Black Lives Matter movement.

Part of why TPAB is so transcendent is the way it addresses the complexity of institutionalized oppression as a whole, instead of speaking directly to the news cycle. At the time, the album sounded like a very specific grief, which no doubt informed its process, but it was inspired by Kendrick’s desire to write about Blackness in a more holistic way.

good kid was a concept album which chronicled life negotiating poverty and violence in Compton. It was a chronicle of inner city life that felt personal and harkened back to the glory days of gangsta rap by examining the nuances of that life without glorifying it. While the nuance of the album included some meditation about institutionalized oppression, TPAB made that its project.

After a visit to South Africa, Kendrick was inspired by the beauty, but felt a dissonance between what he saw there and how he had lived in Compton. He said, “I felt like I belonged in Africa. I saw all the things that I wasn’t taught. Probably one of the hardest things to do is put [together] a concept on how beautiful a place can be, and tell a person this while they’re still in the ghettos of Compton. I wanted to put that experience in the music.”

Interrogating uniquely American racial and political structures after leaving the US gave Kendrick the perspective to create an album that examined racism, colorism, poverty, and institutional oppression (amongst other themes) from a distance, in contrast to the intimacy of good kid.

When it was released, TPAB was the perfect companion to the building momentum of the racial protests. The cathartic experience of listening to an album that embodied both the struggle and the joy of Blackness in a smart but accessible way gave people an outlet which has proven long lasting.

Though his previous albums, Section 80 and good kid, were undeniably autobiographical, TPAB is the album which has come to define Kendrick Lamar as an artist, a visionary, and as a voice to the movement.

His lyricism had already been undebatable, but the album’s balance of raw emotion and meditative thought put Kendrick at the forefront of both conscious rap and mainstream rap. TPAB proved that Kendrick had staying power and, though he was snubbed at the 2015 Grammys, that he could consistently deliver at a high caliber.

The album was also a feat of production. Though skits and interludes have become ubiquitous in rap albums in recent years, Kendrick has consistently drawn from samples and sources to elevate his albums in a highly intentional way. TPAB draws from jazz, funk, soul, R&B, and spoken word to create a tapestry of sound that matches its diverse history and influences.

TPAB‘s intentionality and care proved that Kendrick was a master of craft as well as a masterful lyricist. Though distinct from his previous albums, his pivot on TPAB felt natural, not disingenuous. Not everyone can make the move from the highly personal to a more communal, capacious scope — especially not with the success and widespread emotional resonance that Kendrick achieved.

TPAB, its commercial and political relevance, and the fervor it generated made Kendrick the perfect choice to curate the Black Panther soundtrack. The film, which had relevance in the Black community for its significance as the first Marvel movie with a predominantly Black cast, was a celebration of Black culture which Kendrick was situated at the helm of.

Combined with his next album, DAMN., which proved he could write a fully commercial album which still demonstrated the same thoughtfulness and depth, Kendrick has become one of the most celebrated contemporary rappers. And while good kid gave Kendrick a wider audience and critical acclaim, it was TPAB which set him on the trajectory to reach the heights he has achieved now.

Kendrick Lamar performing at the BET awards in 2015

The Legacy of TBAB

2020’s political climate came to a head after the murders of George Floyd, Breonna Taylor, and Ahmaud Arbery. Black Lives Matter marches came to define the summer and new music came to speak to this new, specific moment.

And while many of them were critically acclaimed — Anderson .Paak won Best Melodic Rap Performance for “Lockdown,” which was directly about the protests, and HER won Song of the year for her protest ballad, “I Can’t Breathe” — they are rooted in specific references that make them more ephemeral.

TPAB has had staying power because it is so nuanced that the themes, symbolism, and politics embedded in the album will be relevant for years. The album’s density means there’s layers upon layers to unpack, which have been influenced by centuries of history. While the album contains lighter tracks like “i,” its meditations on slavery and fame in “King Kunta,” colorism in “Complexion,” poverty in “How Much a Dollar Cost?” and meditation on oppression in “Institutionalized” are still relevant today.

In 2015, TPAB became part of the conversation about the prison industrial complex, which became a significant topic that was propelled further after Ava’s documentary 13th and has manifested in an era of film about the unfairness of the justice system. In 2020, it was part of the conversation about looking at the deeper roots of systemic oppression.

For so many facets of American life, especially Black American life, Kendrick tapped into their roots with TPAB. Emotional and intellectual, capricious but thoughtful, the album did what it set out to do: translating the beauty and unity that Kendrick was inspired by, while acknowledging and analyzing the systems he was raised in.