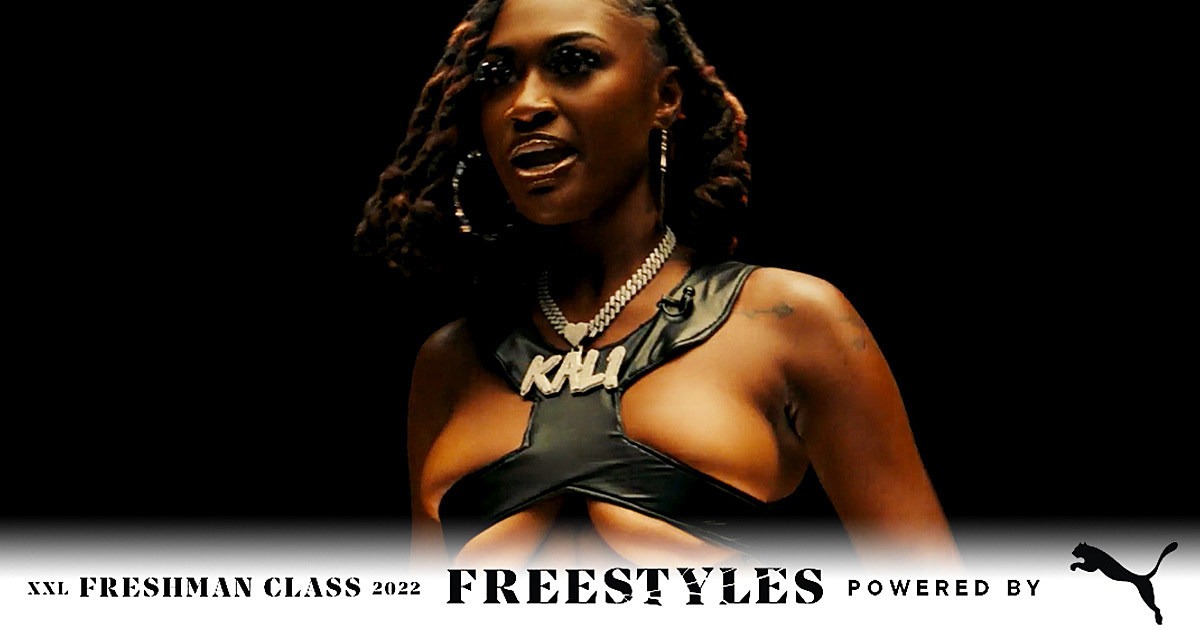 Never judge a rhyme book by its cover and never underestimate the power of a strong woman with a inimitable work ethic on her way to getting the bag. Twenty-one-year-old Atlanta rhymer Kali is the personification of both of those sentiments, and she drives that point all the way home in her 2022 XXL Freshman freestyle.

2022 XXL Freshman Kali’s blend of feminine-yet-hard raps and witty wordplay is evident in her Freshman freestyle. She packs it all into a calculated, even-keeled cadence. The Toxic Chocolate rhymer wants all the smoke while looking glamorous with natural dreads she’s been growing since age 14, and rocking her iced-out, signature "Kali" chain.

"Double X-L my body, they want me to slide in this bitch/Don’t bring your hoe around me ’cause I might slide in your bitch," Kali spits, acknowledging her 2022 XXL Freshman status. "Shit, if she lucky, he want to fuck, too, so she better not trust me/500K and it’s stuffed in a duffy/It’s been five days and he sayin’ he love me/That nigga ain’t fuck, he barely hugged me."

From there, the California-born, Atlanta-bred spitter switches up the flow completely. She continues, "Running shit from Cali to the A/Real estate, I put bitches in they place/Why brag when it’s all in they face?/I need a scammer, B-O-A to Chase/Real shooter, when he spray, it ain’t mace/Bitch say I’m ugly, she must be laced, no Arrogant Tae/No bitch better, I’m arrogant, bae/That’s why he just shut up and do what I say."

In a world where things like social media influence and physical appearance often take precedent over talent, Kali is clear that it starts with the bars for her. The rap game isn’t just a vehicle for other avenues of success. That mentality, mixed with a flow that has been refined throughout most of her life is the exact recipe Kali cooked up in order to land a spot in the 2022 XXL Freshman Class.

Kali's been rapping since she was 12 years old. When she was in the fifth grade, the then-tween wanted her own room, but the only other available spot in the house was the one in which her stepfather used to make beats. With her request, her pops hit her with a hip-hop proposition: write and record a bunch of songs and the room was hers. She completed the challenge within a month, no longer had to share a room with her sibling and the rest is hip-hop history.

Just about a decade later, Kali is signed to Atlantic Records and released her new Toxic Chocolate EP this year. Songs like "Eat It Up" featuring BIA and "UonU" with Yung Bleu showcase her elevation. Now, she's a member of the 2022 XXL Freshman Class and has officially begun cementing her legacy in the rap game.

Peep Kali’s Freshman freestyle, powered by Puma, in the video below.

Read the 2022 XXL Freshman cover story featuring BabyTron, Cochise, Saucy Santana, Babyface Ray, KenTheMan, SoFaygo, Big Scarr, Big30, KayCyy, Doechii, Kali and Nardo Wick when the Freshman issue hits newsstands everywhere on July 13. The issue includes additional interviews with Lupe Fiasco, Kevin Gates, Pi’erre Bourne, NLE Choppa, Yvngxchris, producer DJ Dahi, engineer Teezio and singer Chlöe, plus a breakdown of every Freshman Class from a numbers standpoint, a look back at what the 2021 XXL Freshman Class is doing, the story of why the 2016 XXL Freshman Class gets so much respect now, a deep dive into the world of NFTs through hip-hop’s lens and exploring rappers’ most valuable collections. You can also buy the 2022 XXL Freshman Class issue here.