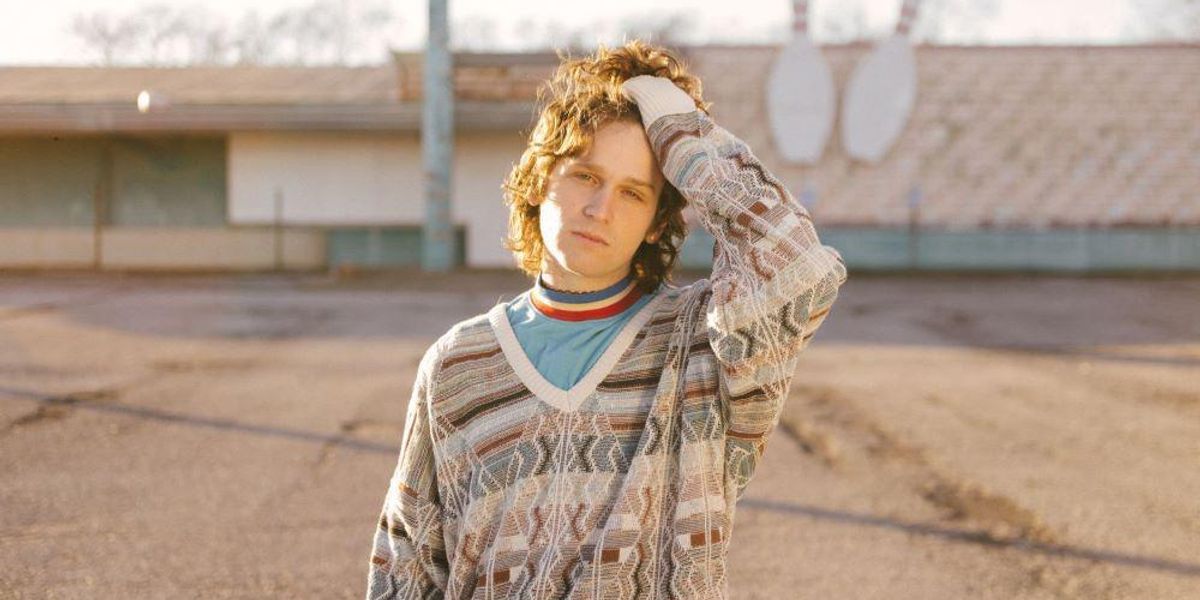 Like many of us, Briston Maroney decided to use the last year to try something new.

The 23-year-old Nashville musician spent most of 2019 gearing up to release his debut album, Sunflower, and then — you know what happens next. With some unexpected free time on his hands, Maroney and his longtime visual collaborator, Joey Brodnax, decided to spend an otherwise lonely summer creating a visual component for the entire album.

“Once we heard that we weren’t gonna be on the road, we found ways to safely film a movie for the record,” Maroney tells me. “We figured we should take advantage of this time.”

Even over Zoom, Maroney keeps a relaxed demeanor, throwing around self-deprecating jokes with a charming humility; you wouldn’t necessarily guess that this was the same guy who landed a major label deal and a Taylor Swift co-sign before even releasing his debut album.

But he has the chops to back it up. Musically, Sunflower expands on Maroney’s folk and Americana roots, with the subtle sheen that comes naturally with growing up during the 2010s indie pop boom. Sunflower, the movie, is surreal and entrancing, with clever lighting and set design lulling viewers into its dreamlike setting.

Popdust chatted with Maroney about the making of Sunflower, self-doubt, the Internet, and more. You can watch Sunflower and read the interview below.

Popdust: Your new album has been out for a little bit. How do you feel?

Briston Maroney: Wild. It feels crazy. I feel bad — I don’t want to disappoint anybody by saying that I don’t know what I feel yet, but it’s a really strange experience. But it’s inherently good.

Walk me through the timeline of making Sunflower.

Some of these songs were three or four years old, but weren’t finished until maybe 2019 or something. We wrapped recording and mastering and all that stuff in March of 2020, so it’s been done since then. But we’ve been writing it and tracking it for what kind of feels like forever.

How did the visual component come about?

The timeline of that was so much quicker than the record itself. We basically realized we were going to have a lot more time in 2020 to film anything than we ever had. We kind of knocked it out most of last summer, which was awesome, because it feels really summery to me. Getting to film when it was really pretty out was awesome.

Joey had this crazy whiteboard in his room that he had drawn this gigantic, graphic pinwheel thing that had all these wild ideas, and a key that basically just explained all of these concepts, bridging together ideas and stuff. I was like, “it’d be cool to film me on a motorcycle!” And then he came in with just this gigantic plan.

There’s a lot of sunflower imagery in the movie that feels very symbolic. What does the sunflower mean to you?

What I’ve worked it down to in my brain, I think the best way to put it is [the sunflower is] just a really simple, undeniably beautiful thing. It’s something you have to work really hard to overthink, and I do overthink a lot. So it’s relieving to have anything that doesn’t have to be overthought.

So the sunflower is a constant reminder that there’s inherent beauty in things?

Totally. And moreso a reminder that beauty is right in front of you — and a lot of times, you don’t have to search for it too far.

What are some of your favorite films and music videos that inspired the movie?

Joey watches so many movies, and he would have a lot better answers for this. We do both love the director Ari Aster. Visually, Midsommar was really inspiring to us. Hopefully our stuff is a lot less horrifying and gruesome.

How did the pandemic affect your creative process?

I think the best part was we had time. But with that, we also had a lot of time to overthink, and my relationship with the record at times was not awesome. I’ve definitely had times where I was like, “I hate this. I fucked up, man.” I thought it was really bad at times. Not to say that the record is good or bad or anything, but when left to your own mind — we all know how that is. So the biggest impact is just having time, for better or for worse.

I’m glad you said that. I think artists should talk more openly about how they feel towards their own work.

Yeah. The record being out is really helpful because I literally can’t do anything about it now. But I had to kind of force myself into trusting that it happened the way that it was supposed to happen. The voices of friends and family and really nice people helped me trust that the album was OK as it was. I’ve definitely come to terms with it now and love it for what it is.

How does it feel to have released an album when you can’t perform it live?

Oh, it sucks, man! That’s such a big part of what I love to do. It’s what I love to do more than anything. I hate not being able to physically watch people connect with it. I’ve said that so many times — I just wish we could go play to people, even if they’re straight up throwing tomatoes at me. It’d be better to see somebody not connect with it and work from there than to be in this limbo.

Your childhood was split between Tennessee and Florida. How do you think those places affect your music?

There’s so much natural beauty in Tennessee. The city I grew up in was really close to the mountains, and there were always constant excuses to be outside and connect to nature. Florida is buck wild. Florida is a sh*t show. And it’s beautiful in its own way, too. I would go to Florida for the summers to visit my mom, and I’d have pretty movie-esque summer experiences where I was the new kid in town for a month on this tiny little island where everyone ran around on bikes and there were no adults ever watching anything that we did. So everyone was getting into harmless trouble and mischief.

I think Florida influenced the more energetic, loose side of the music. The reflection on beauty stuff feels more so Tennessee.

What music did you listen to growing up?

A lot of different stuff, and I think it was kind of varied on where I was at. The earliest people that I really loved were John Prine and Bob Dylan and all that stuff in Tennessee, and then I’d go to Florida and listen to a lot more stoney music. A gigantic range of stuff. I was really lucky to be exposed to a lot of different kinds of music growing up, for sure.

You’re based in Nashville now. What is it like living there as a musician?

Nashville was where I first saw the DIY world firsthand. Playing house shows and seeing a lot of small indie bands play great rock music was really, really cool. There’s also really unique rap music. The Nashville music scene puts a lot of emphasis on individuals and expressing your individuality — at least, that was my takeaway. It’s so much deeper than the country stuff that a lot of people usually think of.

What were you listening to while making Sunflower?

There were a bunch of great records coming out at the time, which was not helpful because I kept thinking, like, “Oh, I’ll never be as good as Peach Pit!” The last Peach Pit record was huge for me. Soccer Mommy’s most recent record had come out around that time, too. There’s this band called Nap Eyes — do you know Nap Eyes? They’re so funny. There’s a song called “Mark Zuckerberg” on their last record, which had come out when we were in L.A. recording. I would finish the session at the end of the day and walk home listening to “Mark Zuckerberg” 10 times in a row.

What are you most proud of regarding the record?

I’m proud that it’s done. [laughs] I don’t know — I think it ended up connecting a lot of my friends and me in new ways, and I’m excited and thankful that it unfolded that way.

I remember a couple years ago, a friend of mine showed me “Freakin’ Out on the Interstate,” telling me she thought you were going to blow up soon. Now that song is kind of getting some new traction on social media, even though it’s a bit older. How does that make you feel to witness this old part of yourself resurface?

I don’t understand it, but I’m down for it. That’s awesome that your friend showed you that! Thanks for listening to it. I’ve kind of come to terms with the fact that I will probably never understand TikTok. I’m super OK with not understanding TikTok. And if that’s what made people find the song, then that’s awesome, and I’m just stoked that anyone is hearing it ever.

I don’t have a whole lot of pride about the new songs being more listened to than the old songs. I’m not really the type to compare things in that way. I see it as a good thing, and a weird, shocking, what-the-fuck-is-going-on thing.

It’s always strange to me when people dismiss TikTok as a method of music discovery. Like, people our age found music on Tumblr when we were teenagers.

Exactly. Or MySpace, or YouTube — people made fun of Napster when we were younger. You gotta find music somehow. It’s hard to bash TikTok in my mind, too, with how people use it. Our managers told me that there’s this trend where kids are using [“Freakin’ Out on the Interstate”] in videos about coming out to their families. That’s amazing. If that’s what this app is capable of doing, and if the song is a tool in that way, then fuck off if you think it’s cringey.

What do you picture people doing when they listen to Sunflower?

Um, TikTok dancing, for sure. [laughs] Just kidding — and this is going to sound really douchey to say — but driving. I had the record in a Dropbox folder for a year, and my friends and I would just drive around my hometown and listen to it. So, I picture people driving, getting some fries from their place of choice, and then hanging out with the windows down. That’s definitely the world that I hope this record sits in. That’s why for the movie, we filmed a lot of me driving.

That makes sense. I get heavy road trip vibes from the album, for sure.

Thank you so much! That sounds like one of those editorial playlists Spotify makes.

Yeah, those are so funny to me. There’s one called “My Life Is a Movie.” I love that.