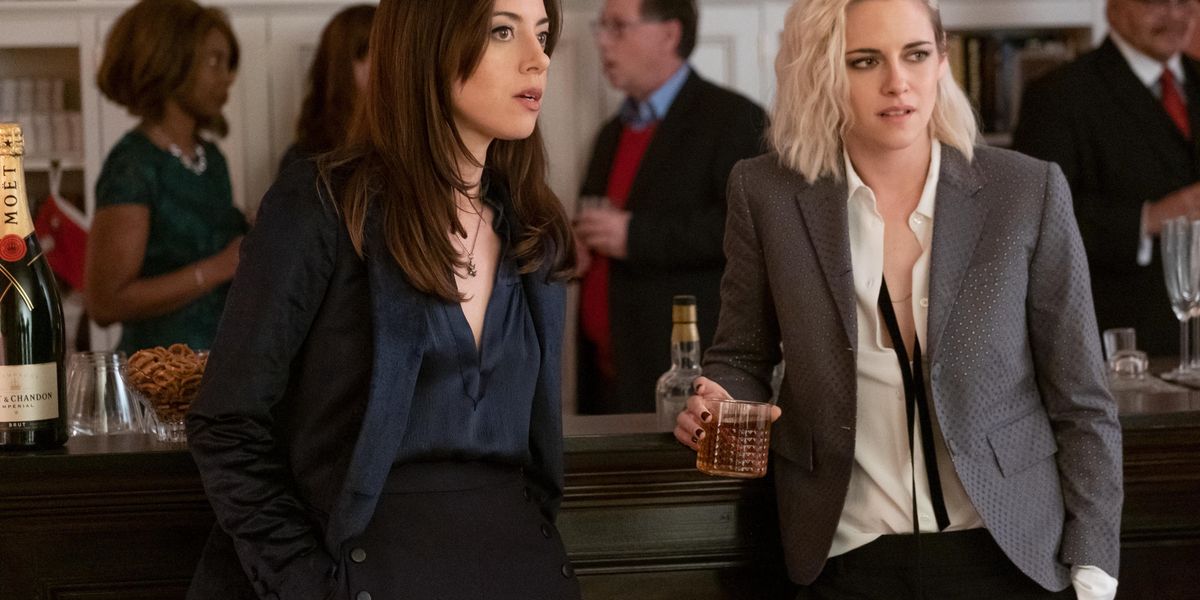 The film, created by Clea DuVall of But I’m A Cheerleader fame, is a beautiful, entertaining, and very queer love story. It stars Kristen Stewart and Mackenzie Davis (who you might recognize from Black Mirror’s classic queer episode San Junipero) as a couple who live together and love each other very much. At least, we’re led to believe they love each other from the first scene, which features Davis persuading an anti-Christmas Stewart to climb up on a roof to see some Christmas lights.

Right away, we think that Davis’s character is—Ghost of Christmases Present-style—benevolently helping Abby rekindle her love for Christmas. But it doesn’t quite work out that way. After someone in the house sees them and starts screaming about calling the police, Abby and Harper try to climb off the roof—but Abby winds up hanging off the edge, and eventually falls off and winds up crashing into the ground. Miraculously, mostly thanks to the cushioning presence of a blow-up Santa, she’s unhurt.

That whole scene could be a metaphor for the characters’ relationship throughout Happiest Season, which takes place over five painful days at Harper’s parents’ house. After inviting Stewart on a whim, Harper waits until they’re moments away from arriving to confess that she hasn’t come out to her parents, essentially letting Abby free-fall into the Caldwell family’s toxicity without so much as a helping hand.

#HappiestSeason director Clea DuVall: “If you had told me when we were making #ButImACheerleader that I would be th… https://t.co/ZJiZNqRVdX

Stewart’s character—a personable and charming lesbian who planned on proposing to Harper on Christmas morning—does her best to accept the fact that her girlfriend hasn’t come out yet. She plays the role of Harper’s orphaned roommate and is supportive and friendly to all. She doesn’t complain when Harper chooses to leave her alone, spending more time helping her father work on his political campaigns than accompanying her girlfriend navigate confusing family traditions.

All this would have been more forgivable if Harper hadn’t been quite so unkind to Abby over the course of the film. Harper leaves Abby hanging, eventually spending an entire night ghosting Abby while spending time with her ex-boyfriend, then claiming that she “needs space.” Harper completely ignores Abby at various dinners and events, throwing her to the wolves, and by the end of the film, the viewer is nearly ready to cheer when Abby decides to leave Harper.

As if this weren’t enough, we’re presented with an appealing alternative to Davis’s Harper: An intimidatingly gorgeous Aubrey Plaza, who plays Harper’s high school ex, Riley. As we discover, Harper and Riley dated in high school, but when someone discovered a love note from Plaza in Harper’s locker, Harper told the entire school that Riley was gay and obsessed with her.

Arguably, Riley and Abby have better chemistry in their few short scenes than Harper and Abby ever do. Their unresolved tension led many viewers to proclaim that the two should have ended up together. Plaza herself released a video in support of the characters’ relationship. “I hope that people walk away from the movie and they’re disappointed that Kristen Stewart didn’t end up with my character, and they, like, riot in the streets about it,” she says.

thinking about the fact that no one is more disappointed that aubrey plaza didn’t end up with kristen stewart more… https://t.co/GnAsJdVs6j

Perhaps it’s better that Happiest Season doesn’t demonize Harper. A moving monologue from Schitt’s Creek’s Dan Levy reminds us that everyone has a different coming-out story, and not everyone is lucky enough to feel safe coming out to their parents.

Many queer couples have lived their entire lives in the closet, and though in today’s more progressive world this is less common, homophobia is still rampant and terrifying. For anyone who wasn’t raised with express encouragement that it was okay to be queer—and hell, even for people who were—coming out is a fraught and terrifying process. You wonder if the world will see you the same way, or if your parents will judge you, to your face or privately.

In that sense, Harper’s selfishness is understandable. Blindsided by her family, brought back into old patterns, Harper’s home visit is a deeply stressful experience on its own.

Still, though, I personally wouldn’t have blamed Abby for sticking to her guns and dropping Harper for Plaza’s character. What Abby has to experience is traumatic, particularly because she wasn’t prepared for it and didn’t consent to it. Happiest Season is definitely not the happiest movie in light of this. In fact, it’s heartbreaking to watch Stewart’s character slowly realize just how confused and self-absorbed her loved one really is.

None of this is a knock on the movie; it’s an excellent watch. Its supporting cast is exceptional, its design and narrative arc (culminating in a New Years’ Eve party fiasco) is appealing if not also predictable. Levy and Plaza are drily magnetic in their supporting roles, navigating the film’s sometimes roller-coaster of humor and sadness with ease. Alison Brie is excellently unhinged as the perfectionistic, competitive Sloane, and Mary Holland’s breakout performance as the quirky family black sheep Jane is star-making in its own right.

Still, one can’t help but feel a certain emptiness at the film’s end, a lack of faith in Harper and Abby’s relationship that can’t be ameliorated by the fact that they eventually gain acceptance from Harper’s very traditional WASPy family. Abby and Harper embark on a very traditional path towards matrimony, and the whole thing fits well into the time-honored tradition of the Christmas film, but one can’t help but wish the film’s ending had been a little more queer—particularly if it gave us the redemptive Abby/Riley romance we all deserved.