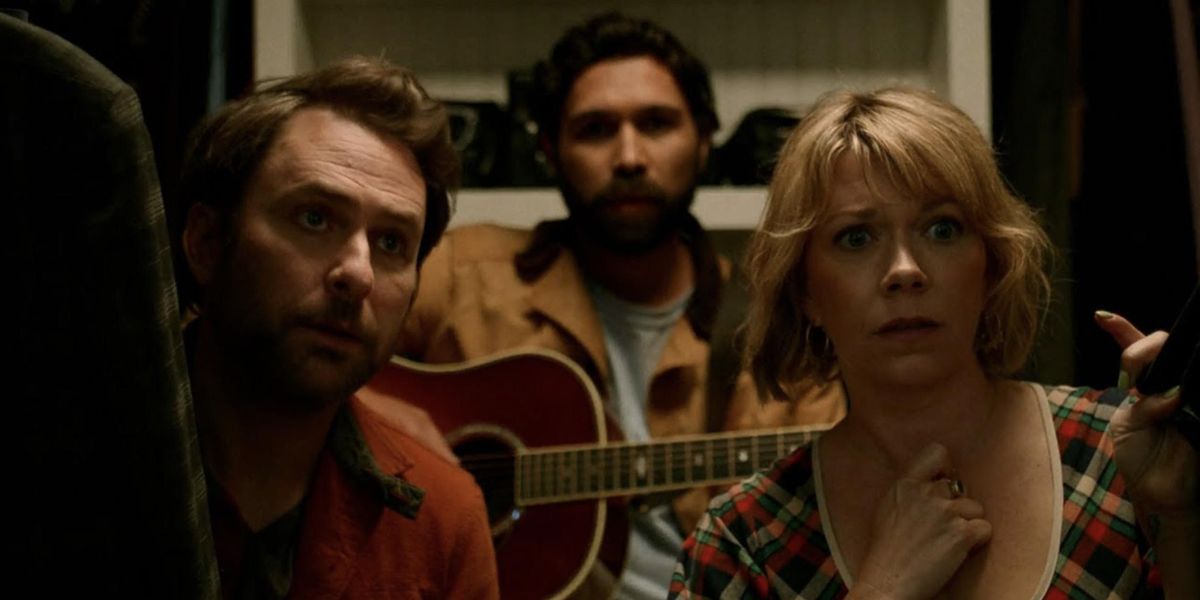 Ben Abraham's new single "If I Didn't Love You" arrived on Wednesday, and with it, a twisted music video. It's Always Sunny in Philadelphia actors Charlie Day and Mary-Elizabeth Ellis play a couple Abraham sings for in the park. He follows them home and refuses to leave, leading to a hilarious (and bloody) climax. Watch it at the bottom of this interview.

The track is the latest single off Abraham's album Friendly Fire. Known for writing songs for artists like Kesha, Demi Lovato, and The Chicks, the Aussie shows that he could be a star in his own right. His voice can be gentle or powerful, and he exhibits a Nick Drake-like gift for warm, intricate arrangements.

We hung out with Abraham at Atlantic Records before the music video's release release.

Friendly Fire has been out for a while now. How does it feel? Or have you been working too hard to think about it?
It’s been surreal. The journey of making the album was so intense that I think the release was always going to be a bit of an anticlimax. The music business, of it all aside, having such an honest and vulnerable piece of work out in the world has been a huge turning point in my life for sure. Now I’m just trying to keep myself busy, so I don’t have a total existential crisis that inevitably follows that kind of vulnerability.

It’s been a while since your first solo album. I know this album is a documentation of a personal voyage you’ve been on. Did you write the songs for Friendly Fire in a short period of time, or had you been kicking them around for a while?
The writing on this album spans about six years of my life. "Runaway" and "I Am Here" were both written right near the beginning and then I think "Love Myself" was one of the last songs to be finished. The tracklist really does capture the chaos of that era of my life.

When I mentioned I liked the song “Requiem,” you said you were a little surprised at its success. Why do you think it’s connected so strongly with fans?
I suppose it’s got that very warm, acoustic soundscape which people tend to connect easily with. I’m just so bad at predicting what people will or won’t like. When we were putting the tracklist for the album together I remember "Requiem" was never near the top of anyone’s lists so I just assumed it was too gentle and folky to make the final cut. But I think it’s some of my best songwriting, so I'm thrilled it’s made it on and been received so well.

You use a lot of strings and piano. When you write a song, do you think about the instrumentation and final arrangement while you’re writing, or does that come after the lyrics?
Almost never! In fact one of the challenges of making my albums is that I tend to write just with a single instrument and find it very hard to visualize the sonic world beyond that. Finding the arrangements and instrumentation is definitely a collaboration with my producer–who in the case of Friendly Fire was James Flannigan.

Your parents were both musical. Were you basically born with a guitar in your hands?Ha I was definitely born singing, but my dad was a flute teacher so I actually grew up learning flute and piano. Guitar didn’t come til much later and I basically had to teach myself. I’m still very much a poor man’s guitarist and I shudder to think what real guitarists think of my playing haha. But yeah. My whole family sings–both parents and all five of us kids. It’s definitely mum and dad’s dream that we’ll one day start a family band.

How long have you been in LA? What ultimately prompted the move from Australia?
I have come back and forth for over 10 years now, which seems absolutely wild to me. But the final decision to move here was to release Friendly Fire. I packed all my stuff in Melbourne into a shipping container and in January 2020, I made the move to my little rental house in Los Feliz. I was like, “This is it! I’m ready to put this album out into the world and step into the next phase of my life." What impeccable timing I have. I think we all know what happened next.

Did you always envision writing songs for other people as well as yourself?
I never did! It really came about because my managers suggested it could be something I might want to try and my first attempt was with my friend Wafia. Writing for others doesn’t come super easily to me, but when it works out it is so creatively rewarding and fulfilling. I just need to make sure I work with the right people because making music feels like it really costs me a lot emotionally. I’ve learned I'm not someone who can just collaborate with anybody. Which is a shame haha because I’d probably own my own house if I could.

Give us some insight into the world of professional songwriters. Do you write a song, and then try to find a match? Or do people ask you to write songs specifically for them?
In the world of songwriting, it’s all of the above. Now that I’m a few years into the life of a songwriter, I have learned that my personal style is to write songs specifically for people and particularly with people. I’ve learned I’m not someone who can be a chameleon in my writing. I have a definite style and definite strengths and weaknesses. If someone wants me to write a song for their project, I need to make sure they know what they’re looking for and why they’re asking me particularly. Because the other way has proven fruitless to me. Sitting in a room hypothesizing about who might want a pop song about this or that–I haven’t had any songs come out from that kind of session. At this point if you want a Ben song, you ask Ben haha. For better or worse.

What’s your secret for keeping a great beard?
Hahahaha I appreciate this hard-hitting journalism. Honestly–laziness. I tend to forget about it and just let it grow til it needs to be trimmed. Though I did invest in a really good beard trimmer, so that I could cut it back easily and painlessly. Mostly though I think the key is just to make sure you’re born with good beard genes hahaha.


Ben Abraham – If I Didn’t Love You (Official Music Video)