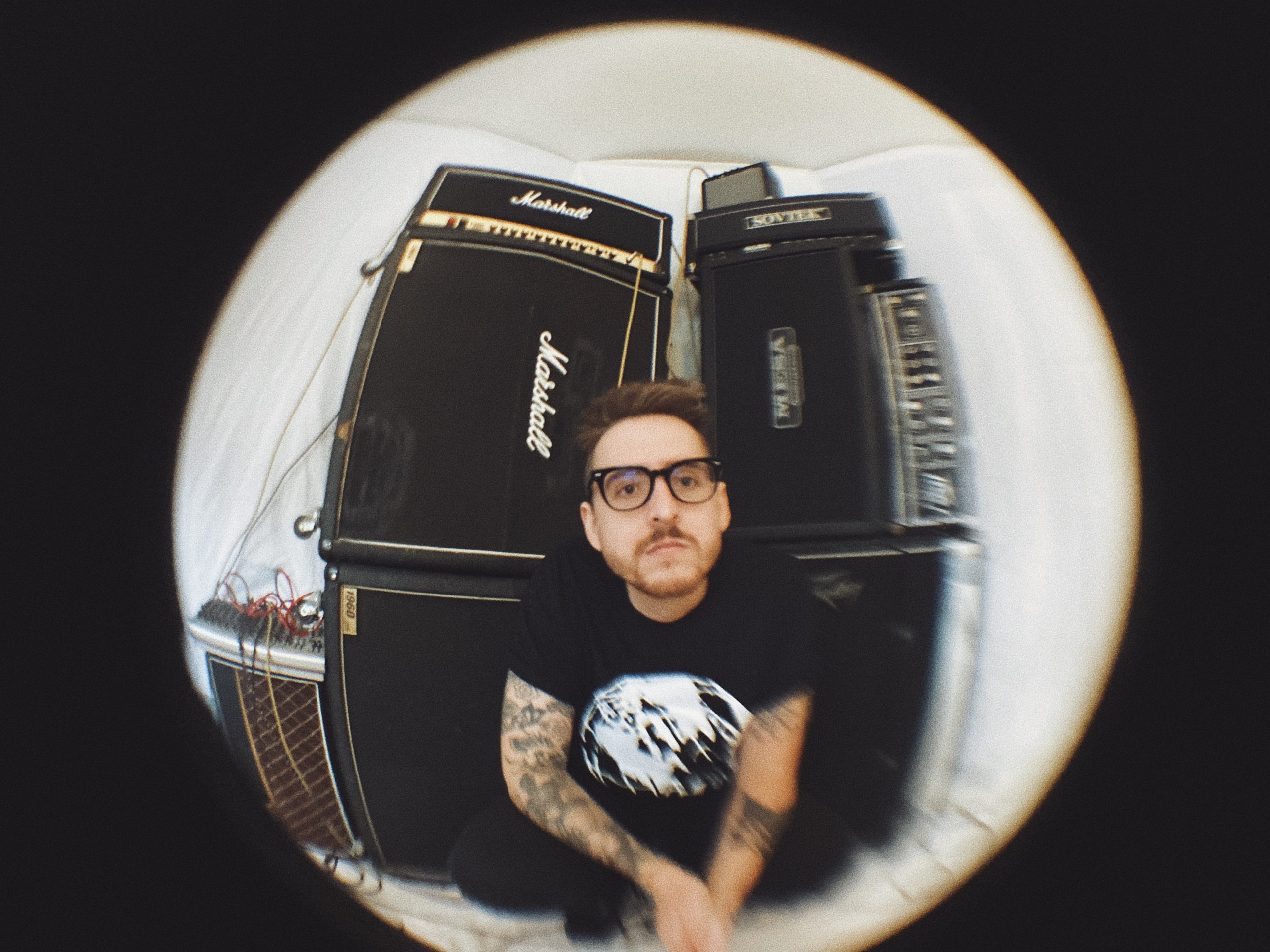 Dazy is for the people. People who know the words to every Punk-O-Rama compilation. People with an emergency Oasis reunion fund. People who will talk your ear off about Dookie. People who worship at the altar of the Jesus And Mary Chain’s proto-shoegaze. People who love ’60s pop (and can tolerate full-throttle guitar distortion). People who dig the current wave of independent power pop, led by the likes of Mo Troper and Young Guv. And that’s just for starters.

Dazy is the one-man band of James Goodson, the Richmond-based artist (and music publicist) who’s played in a number of noisy punk outfits over the years like Teen Death and Bashful. You may know him as the mastermind behind MAXIMUMBLASTSUPERLOUD: The First 24 Songs, the ear-splitting, citrus-soaked compilation Dazy dropped last year, or his collaborative track with Militarie Gun, “Pressure Cooker,” easily one of 2022’s most singalong-worthy and ass-kicking songs. He’s now preparing to release his first-full length as Dazy, OUTOFBODY via Lame-O Records, and frankly, it rips.

Dazy’s music feels like a tidal wave. His harmony-laden guitar pop is marked by huge refrains — the kind that requires a ballsy confidence to write, even though he says they come from simply “humming stuff until I like it” — and feedback-drenched guitars possibly robust enough to make some sort of blip on the Richter scale. Pulling from earnest emo, crunchy noise-pop, soaring Britpop, and rollicking punk, Dazy has found a certain sweet spot — one that sounds a bit like a chainsaw has been let loose in a Teenage Fanclub song. Dazy only began playing shows in April, but has shown a lot of potential with songs that simultaneously sound fit for a big festival and shitty punk club.

Goodson grew up as a punk kid in a small town at the northern tip of Virginia called Lovettsville. Bands would rarely tour there, but the town over, Purcellville, had a local punk scene that hosted shows at a skating rink and community center. This was a big deal for Goodson, who says there wasn’t much else to do. He remembers playing his first-ever show at a battle of the bands competition in his mid-teens. “We definitely were trying to do a Green Day, Rancid kind of thing,” he says. “I played bass. I was overplaying — desperately trying to sound like Matt Freeman in every song — but it was super fun.”

He got into Green Day and Nirvana first, and then with the help of a friend’s older brother, was sent down a rabbit hole of classic punk and hardcore. Goodson’s adoration for the guitar bands that are gateways for countless teenagers every year is front and center in his music. Couple that with the fact that all of Dazy’s songs have been recorded in a bedroom, and one could certainly view Dazy as a tribute to that exciting period when you first fall in love with rock music as a kid.

“I wanted to tap into the music that I’ve always loved and will always love so it will never get old to me,” Goodson says. “‘Starter band’ or ‘gateway band’ get used derisively sometimes, even though we all know and acknowledge that the music you fall in love with first is always gonna be really special to you … ‘Big’ and ‘accessible’ can be signifiers for something being compromised in some way, but a lot of times those things are fucking great. There’s a reason that Nirvana was a huge band. They were really good. I think ‘gateway bands’ are pretty cool things — being a band that helps introduce people to other bands, what could be cooler?”

But Goodson isn’t just enamored with punk bands with famous logos. Throughout our conversation, Goodson professes his love for everything from Kid Dynamite and Cheap Trick to Madchester and Sarah Records, and you can hear that omnivorousness in everything Dazy puts out. “From the beginning, I feel like the goal was always like, “Is there a way to combine these things without it sounding weird?” Goodson says. “You know, to combine that I grew up with Rancid and with Creation Records and that kind of stuff.”

Back in 2016, Goodson began writing songs that he knew weren’t the right fit for Teen Death, and through the years, they started to pile up quickly. But he held onto them for a while, unsure of the best way to release them and whether he wanted to start his own project or expand to a full band. Once the pandemic hit, Goodson put his hesitations aside and started self-releasing singles as Dazy.

“I think [the pandemic] made me be like, ‘Well, everything is pretty weird right now. So I guess I’ll just throw some of this stuff out and see what happens,’” Goodson says. “I always really loved when bands would do proper A-side, B-side singles, and I liked that smaller releases were more opportunities to make artwork. So I just started putting some of these singles up on Bandcamp in 2020 on a whim … A part of me regrets that I spent five years — or however long it was — not putting out music, but then part of me is also happy because I think the songs ended up better because of that.”

Goodson records Dazy’s music in a bedroom, which was mostly a practical choice since this project is a compact operation. Goodson isn’t a gearhead. He’s enjoyed messing around on GarageBand since he was in high school, and he loves the sound of drum machines — plus studio time is expensive. Until now, Dazy songs have been recorded on one mic; Goodson jokes that he made the big jump to two mics for OUTOFBODY.

Dazy’s fuzzy power chords are juxtaposed with the occasional groovy dance beat or synth adornment, which results in a satisfying mix of organic and digital sounds, though this contrast wasn’t necessarily intentional. “I’m not really hung up on ‘It’s got to be live in the room or it doesn’t count,’ but then I’m also not one of these people that’s like ‘All the good sounds are in the box on the computer,’” Goodson says. “I really just think that if it sounds cool, it sounds cool.”

A good amount of Dazy’s supercharged guitar sound comes from plugging straight into a preamp and right onto the computer — something he was initially apprehensive about, but Justin Pizzoferrato, who mixes and masters all of Dazy’s material (and has engineered for the likes of Dinosaur Jr, Sonic Youth, and Pixies), convinced him otherwise. “I wasn’t sure if I was allowed to not have things coming out of an amp, and [Justin] was like, ‘I don’t know, man, the Beatles would plug stuff right into the board, so if it was good enough for them, it’s good enough for you.’”

Dazy’s 2021 compilation, MAXIMUMBLASTSUPERLOUD: The First 24 Songs, collected two EPs and four singles plus previously unreleased material. Goodson says many of those songs were recorded in a weekend and released days later. His forthcoming LP OUTOFBODY took a lot longer to come together. The album was a much larger undertaking because not only did Goodson want it to hold up as a complete body of work, he was also considering roughly 100 different songs for the tracklist. He wanted the record to be short but had a lot of ideas he was hoping to cram in.

“It was a pretty big headache, but a good problem to have,” Goodson says. “I just think it’s really fun to write songs. I know that probably sounds very corny, but it’s one of my favorite things to do. So I end up with a shitload of songs, and I’m not saying they’re all good, but there’s a bunch of them [laughs].”

“Split,” the new OUTOFBODY single out today, is textbook Dazy. It’s complete with happy-go-lucky melodies and a thick sheet of vibrating guitars, and it may just make you want to open the moshpit while wearing a big, dumb smile. If you’re here for fast-acting injections of serotonin via blown-out guitar pop, this album won’t disappoint. And if you’re looking for more dynamism from Dazy than you’ve heard before, you’ll find that, too.

Songs like “Motionless Parade” and “Inside Voice” find Goodson delving into ballad territory. The former a charming acoustic track with a warbling guitar solo, and the latter with nary a trace of electric guitar — by far the quietest and most touching Dazy song to date. “I guess nothing’s for sure/ But there’s no point in whispers anymore/ Yeah, I could tell you mine/ And you could tell me yours,” Goodson sings over a subtle electronic beat with a comforting benevolence. “A song like ‘Inside Voice,’ a lot of that was just wanting to go out on a limb and challenge myself,” Goodson says. “I wanted to see if I could pull some stuff back and still pull it off. That was definitely a song that was a really last-minute addition.”

Dance beats loom large on other tracks like “Rollercoaster Ride,” “Ladder,” and “On My Way,” adding vibrancy to already punchy songs and tipping a hat to some of his favorite bands. “In my early twenties, I got really into the Jesus And Mary Chain and even some of Bob Mould’s solo stuff where he uses drum machines,” Goodson says. “That’s why the Jesus And Mary Chain are such a big band for me. They have these songs with the craziest guitars, but the beat is fully danceable. I just think that’s the coolest thing.”

“Gone,” which closes the album, is both Dazy’s longest song yet — clocking in at just under four minutes — and an ambitious attempt at a sweeping, timeless pop finale. With mellotron strings, marching drums, a cacophony of overlapping vocals, and some guitar shrieks for good measure, Goodson reaches far beyond the realm of punk and emerges with a stirring song about the importance of taking things as they come, even as life continues to punch you in the face.

In many ways, OUTOFBODY is about the time we spend inside our own heads — all the doubts, temptations, dreams, frustrations, and neuroses that can bog us down but also serve as a reassuring reminder that we give a shit. “Is that my voice leaving my own mouth?” Goodson asks in the album’s opening line, and later, he quips, “Nothing like a little fun/ Thinking about what could go wrong” on “Motionless Parade.” Even with all these thoughts racing through the brain, the record also encourages more frequent leaps of faith. “I guess we oughta try to say the things that stick to our insides,” he sings on “Inside Voice.”

After all, if Goodson didn’t take a few leaps of faith, we wouldn’t have Dazy, one of today’s most reliably feel-good loud-as-hell rock bands. “Hesitation, getting a little stalled out, or procrastinating, those are things I think about a lot and how that can impact your life,” Goodson says. “I do try to be mindful of that and try to resist because you’ve got to do stuff, whether it’s something that’s super important to you, or something as silly and simple as, ‘Should there be a keyboard on this?’ … So, maybe that’s part of writing all these songs. It’s telling myself not to talk myself out of whatever.”

OUTOFBODY is out on October 28 on Lame-O Records. Pre-order it here. The cassette edition is coming out on Convulse Records, and you can pre-order that one here.