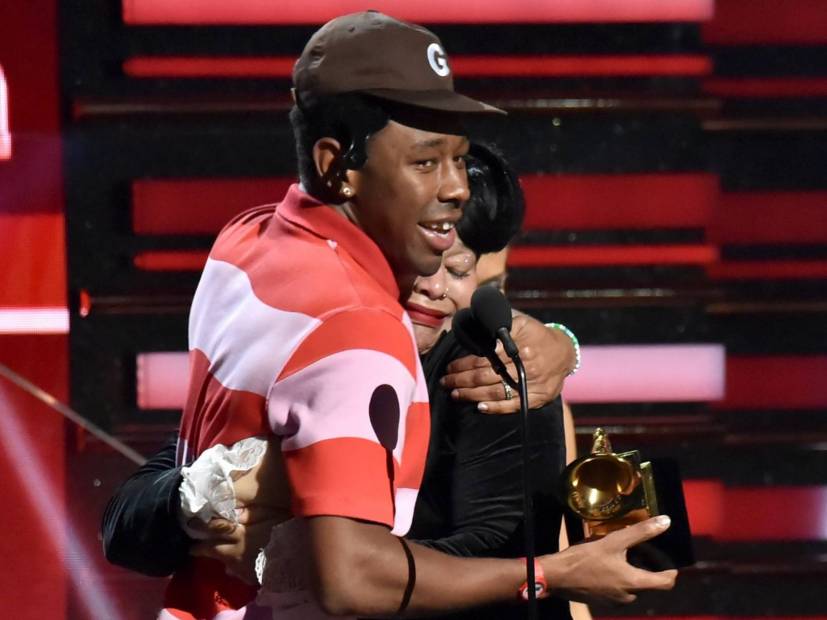 Los Angeles, CA – Tyler, The Creator won his first Grammy Award at the 62nd Annual Grammy Awards on Sunday night (January 26). The Odd Future mastermind accepted the award in the Best Rap Album category for his fifth studio album IGOR, which was released last May.

The former Billboard 200 chart-topper beat out Meek Mill’s Championships, 21 Savage’s i am > i was, YBN Cordae’s The Lost Boy and J. Cole’s Revenge of The Dreamers III.

Tyler was previously nominated in the Best Rap Album category for 2017’s Flower Boy and Album of the Year for his contributions to Frank Ocean’s Channel Orange.

As Tyler got up to give his acceptance speech, he brought along his mother Jasper Dolphin who was shedding tears of joy for her “baby.”

“That’s my mom if y’all wondering, “he says. “Hello. I don’t know if I’m gonna be up here again so bare with me. Damn, I don’t got nothing prepared. One, to my mother, you did a great job raising this guy.”

Prior to the win, Tyler was asked by a Rolling Stone reporter about the controversy swirling around the Recording Academy. Ousted President/CEO Deborah Dugan filed a discrimination complaint last week and accused the awards show of being “ripe with corruption.”

“I’m half and half on it,” Tyler said. “On one side I’m very grateful that what I made can be acknowledged in a world like this. But also — it sucks that whenever we—and I mean guys that look up to me—do anything that’s genre-bending or anything—they put it in a rap or urban category.”

Tyler's full comments after being asked by a reporter (from RS) about the controversy over Grammy voting. pic.twitter.com/L5f2Gbydmz