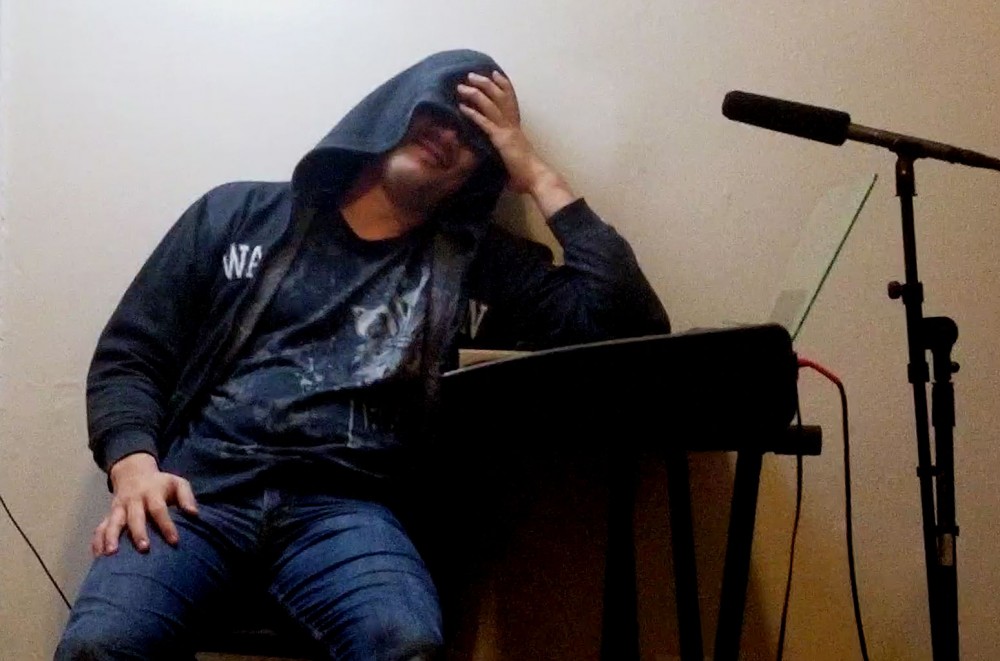 Todd Nathanson is surprised anyone takes him seriously as a music critic. With rare exceptions like video essayists PhilosophyTube and Lindsay Ellis, it’s hard for any YouTube creator to achieve the kind of professional respect reserved for other more established forms of media. Rather than gunning for that mainstream acceptance, Nathanson has built a considerable following on his own terms over the past decade.

Just as he did back in 2009, Nathanson films himself in silhouette behind a piano (hence the channel name Todd in the Shadows), usually performing a cover of a song before starting the video proper. He’ll then use a combination of snarky one-liners, clever analogies, and throwaway references to get his point across, but there’s often some unique analysis about pop music or music history along the way. Recently, his “7 Rings” video used The Nightmare Before Christmas as an analogy for cultural appropriation, while his unpretentious delivery avoided didacticism.

Without the budget and team other successful YouTubers have to pull off elaborate sketches or complicated effects, the focus is on the content itself — Nathanson will shoot a video like his recent Best of 2019 list several times until he is satisfied. While he started out doing pop music reviews, starting in 2015 he branched out to other series, among them One Hit Wonderland, which looks at acts known primarily for only one song, and Trainwreckords, about albums that demolished their creators’ careers.

Anyone who follows pop music this closely for a decade will gain some perspective on where it’s been and where it’s headed — and that time grinding has made Todd Nathanson a formidable force on YouTube, with 320,000 subscribers and 70 million cumulative views. His videos are regular events on the r/popheads subreddit, and longer-form posts will frequently paraphrase and reference Nathanson’s videos. A new generation of YouTube critics like Mark Grondin of Spectrum Pulse and Sean Fay-Wolfe of Diamond Axe Studios (who recently made a video depicting Todd’s incorrect predictions) disregard traditional print routes, instead building on Todd’s pop song review format for their content.

For those that find outlets like Pitchfork too uptight or contemporaries like The Needle Drop too detached, Todd in the Shadows’ lack of pretension makes the prospect of pop music analysis more approachable. Below, he talks to Billboard about his hobby-turned-career and the changes he’s noticed in discourse about popular music.

What made you start reviewing pop music?

I was a fan of what became [Todd’s since-imploded former employer] Channel Awesome and the Angry Video Game Nerd at the time. It was Mystery Science Theater but on different topics like movies or video games. I figured I didn't see anyone doing music [in that way], so that was the topic I was interested in — but one of many. I reviewed music a little back in college, but never really imagined it'd be my career. I was just doing this for fun, because it was in this niche that no one was really in at the time on YouTube.

I was just doing it to crack a few stupid jokes about Justin Bieber's haircut. Slowly over time, I just never got a real job, and YouTube started making me more money. So I just kept doing that.

How did you come up with the image?

I was looking for a real job, and I'd figure I didn't want my videos floating around, should I have a job in the real world. So I was thinking about how I could protect my identity, or at least have some kind of plausible deniability should it ever come up. I knew some people just did videos entirely voice-over — I didn't really want to do it like that. I played piano for fun, so I came up with this image of like, "What if I do this entirely in silhouette?" And I just loved the picture of it in my head. I couldn't stop myself from starting the show once I [filmed] it like that.

When you started, the style of YouTube videos was not more developed than yelling into a webcam — was there any pressure to conform and be another guy yelling on the internet?

I was a guy yelling on the internet — it wasn't pressure, it was just how I started out. It was the first idea I had, and I haven't really gone back those early videos for some time. But I don't know, I saw guys yelling on the Internet and it was funny to me, so that's how I started.

But even back then, I could tell when people were pretending to be angry at stuff that didn't really make any sense. And I was like, "Well, I don't want to be just the screamy guy all the time, I want to have normal reactions to the thing.” Plus, I don't have a great angry voice, so I was kind of trying to adjust away from that pretty early on.

Were there any music critics or even comedians you looked up to as you were trying to put these reviews together?

I was banned from watching MTV [as a kid], my parents were very opposed to pop and I was only allowed to listen to country music. When I turned 15, I just devoured everything I could – to me, AllMusic and their writers Stephen Thomas Erlewine and Ned Raggett were extremely helpful to me. I was trying to learn everything all at once. I discovered that one of my major influences was, of all things, The Daily Show (with Jon Stewart), because I loved the way they put jokes together, and I loved the way that they could have a point while still being funny.

A major influence on basically everything I do is the [turn of the millennium] glory days of VH1 — the era of Behind the Music, Pop-Up Video, and eventually I Love the 80s, before it became just a full-on reality show network. Everything I know about editing, everything I know about putting together a history or a documentary-style thing — I am copying their style completely. Sometimes I'll just go back and watch old episodes of that stuff and I'm just amazed at how tight the editing is and how much I learned from these shows. If my stuff has any real value it's that, because those shows don't exist anymore.

Walk me through the process of a review.

The modern reviews come from one solid joke that made me laugh. And then usually, the rest of the episode takes shape around that one joke. For “7 Rings” it was the [joke about] the cultural appropriation of theater nerds that made me laugh. I really did not want to wade into that controversy but I felt like I should.

One Hit Wonderland usually comes from me finding a second hit, or even a second song that interests me, or some other connection that you wouldn't know behind the one guy with the one song. When I found the failed solo career of Gregg Alexander [frontman of New Radicals], I was like, I wanted to share this with the world. One of my favorite things I ever found was the follow-up to [Carl Douglas’ 1974 Hot 100 No. 1 hit] “Kung Fu Fighting,” “Dance of the Kung Fu.” That's the kind of thing I've been searching for for these videos. Or they have some other deep influence behind the scenes that no one knows about, I really enjoy those kinds of things also.

Was there a moment this decade where you felt like you needed to change your approach?

I wouldn't say my reviews have changed, but the discourse has changed dramatically, I think Robin Thicke’s “Blurred Lines” [in 2013] was the first time in my reviewing career where the controversies became the predominant topic — versus 2009 where everything was just kind of silly and fun, like Black Eyed Peas or early Lady Gaga. It’s not the first time a controversy happened, it's just the first time it happened in my career. But serious conversations were starting to enter the mainstream.

Certainly 2014 was a very heavy year. We had the Iggy Azalea controversies, we had deciding whether Lorde’s “Royals” was condescending, Macklemore apologizing to Kendrick Lamar — there are a lot of things that happened, and I remembered I was like, "Cheap jokes aren't going to cut it anymore because this is not just some esoteric academic thing, everyone's talking about it."

Does that mean the side series like One Hit Wonderland and Trainwreckords serve as breathers? They must be more fun than keeping up with modern discourse.

Modern discourse can be exhausting, but a lot of the videos I'm really proud of this year were me weighing into the really complicated stuff like the “7 Rings” video… For the One Hit Wonderlands and Trainwreckords — like I said, I watched a lot of VH1 growing up because I wanted to just learn everything. Like, there’s no reason someone should watch Hootie & the Blowfish’s Behind the Music, but I watched it 10 times.

And like I said, [VH1] just don't do that anymore. Even modern critics don't really go very far backwards — it's always just what got released today, or in the past week or the past year. If I’m the only person out there making stuff like that, that’s a niche I could do. It’s something I’m glad to be doing.

It's funny — I always considered myself a comedian first and foremost, so I'm really not huge on the idea that someone would actually take my opinion seriously or my thoughts honestly. Jon Stewart would always have the same weird look on his face when someone was like, "How do you feel as a journalist?" YouTube is such a different thing, and so personality-driven — versus something like Pitchfork, where there's like an editorial style and you don't necessarily know the people writing.

When I started doing this, it was a novelty [on YouTube.] Taking pop music seriously was part of the joke. But nowadays, that's completely normal – we've got a billion Patrick Batemen. Everyone takes it seriously. Back in the day when American Psycho was written, that was how we knew he was crazy — that he took pop music too seriously. And nowadays it's just the normal conversation.

How close do you pay attention to music that’s not on the pop charts, and how do you keep up with it?

You do have to keep your ear to the ground, because of the [overlap between] pop and indie, and that’s definitely something that happened in the last 10 years. Like Beyonce collaborating with the guy from Vampire Weekend [Ezra Koenig, on the song “Hold Up.”] That wouldn't happen in the 2000s.

It seems like everything mixes now. There is no set genre. That’s why the “Old Town Road” thing was so silly because, like, how can you say this is only one genre or another? These things don’t exist anymore! Trying to even make those distinctions doesn’t seem useful to me. I don’t even know what FKA Twigs is on the spectrum; if she was the biggest thing in the world tomorrow would anyone blink? I never tried to figure out what genre she falls into because it doesn’t seem to matter anymore.

That's something I've been pushing myself on for a couple of years now — in the past I just let whatever music I ran into come to me, and I’d do my best to go and seek out something new. I'm trying to keep up more now, I'm trying to pay more attention, listen to more records. Just treat [criticism] like it's an actual job that pays me money.