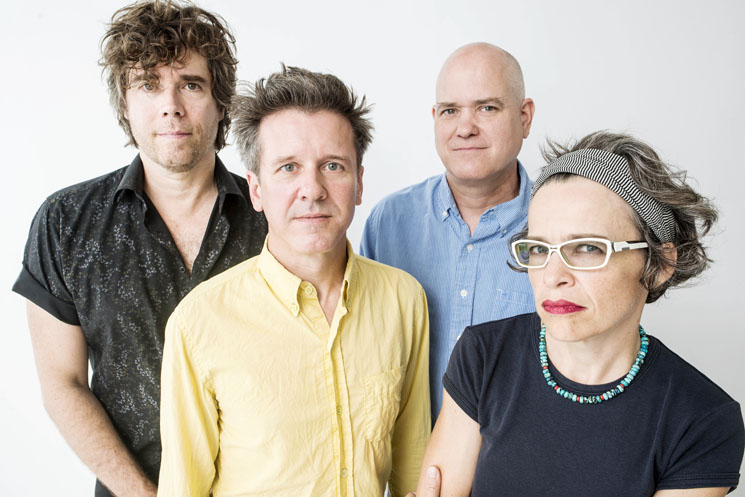 Superchunk have been honing their fuzzy brand hook-filled punk for almost 30 years, yet with each album they still manage to find new ways surprise. Their 11th full-length, What a Time to Be Alive, continues the band’s post-oughts hot streak, doubling down on what they do best: fast, loud and catchy.

Exclaim spoke with singer-guitarist (and Merge Records co-founder) Mac McCaughan about the album and its unique approach to trying times in the United States. Here’s what he revealed.

1. What a Time to be Alive wasn’t planned.

“We didn’t have a plan for when the next Superchunk record would come out],” says McCaughan. “But I started writing songs in the fall 2016, just because the anxiety leading up to the U.S.] election and the aftermath. It made sense for them to be Superchunk songs. We had a window where we could record — drummer] Jon Wurster] wasn’t going to be on tour with Mountain Goats or Bob Mould Band. It just kind worked out that we figured out a way to make a record last year.”

Even by the high standard the band’s post-hiatus records, What a Time to Be Alive is an aggressive, guitar-based rocker. That was not their original intention, though they did want to keep songs concise and to the point while ensuring that they weren’t “worked over” too much in the studio. “The energy that you get with those kinds songs was more fitting for the subject matter,” he says. “As we were wrapping up, we realized it’s all just guitars. This is the first time we’ve had a record like that since 1993’s] On the Mouth.”

3. Though inspired by Trump, it’s not a political record.

“I think it’s just my inclination to have stuff be slightly abstract, not just hitting you over the head.” Rather than making an album explicitly about American politics, McCaughan wanted to capture the anger and anxiety felt by many Americans trying to get through their day-to-day lives. “I know people who have somehow managed to separate themselves from the news cycle, which I have not.”

Instead McCaughan found solace in songwriting. “Being older, I think that gives me a little more perspective different way thinking about things,” he says. “Hopefully there’s a sense humour. I never find myself writing a song where everything’s dire from beginning to end. There’s always a little bit positivity in there.”

Several Superchunk’s records have featured contributors from outside the band. But this time out, the group enlisted an all-star cast friends to help out. It started with the single version “Break the Glass,” which was recorded early on. “It sounded like a cross between A Giant Dog and Sparks,” he says, so he tapped A Giant Dog singer Sabrina Ellis to add backing vocals.

“Once we did that, then it just became like, who else would make sense on this?” Both he and Skylar Gudasz had contributed to the recent Hiss Golden Messenger effort, Hallelujah Anyhow, sparking her contribution to “Black Thread.” Magnetic Fields’ Stephin Merritt and Waxahatchee’s Katie Crutchfield added their pipes to “Erasure.” “I liked the idea having two other different voices: one that was way below mine and one that was above,” says McCaughan.

Finally David Bazan (aka Pedro the Lion) managed to sneak onto “Cloud Hate,” which was written at the last minute in the studio. “Most these artists we’ve either toured with or are friends with or fans . I like the idea it being a community effort.”

What a Time to Be Alive is out February 16 on Merge.