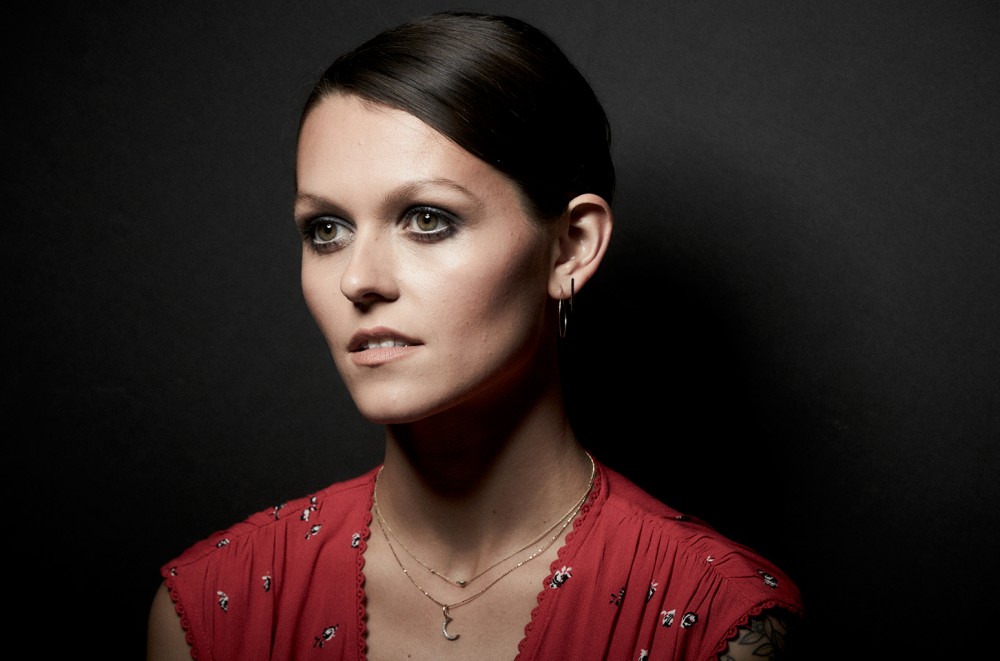 The title of Rylie DeGarmo’s first solo album, Perigee, perfectly encapsulates the journey she took to make it.

The term — which describes when a moon or satellite is closest to Earth during its orbit — reflects how she explored her musical and personal independence in the wake of releasing the 2015 acoustic-centered EP The Rue (named after the duo she formed with her father, former Queensryche guitarist Chris DeGarmo) while preserving familial and artistic bonds that she holds dear.

Having finished college studies as a French major after putting out the EP, she was feeling the urge to devote more time to music and wanted to isolate herself from everything that she knew to see what would come of working on her own. She felt pulled toward Nashville due to the city’s spirit of music and creativity. “I wouldn’t have any crutches to lean on, so I liked that sort of inherent challenge going somewhere that was really different,” she remembers.

Her love of driving led her to road-trip for several months, stopping in Colorado and Austin, and writing along the way before moving to Nashville in 2016. There, she befriended producer Mike McCarthy (Lee Ann Womack, Spoon) and began working on music with him. During a holiday visit to her hometown of Seattle in 2017, she played Chris a song called “Heartsick.” He asked her to record a demo, and they headed to his basement studio on the spot.

“It affected me in a way I wasn’t expecting — to have it really inspire me,” recalls Chris. “As soon as Ry finished the tune, I said, ‘We have to record this.’ I really wanted to capture that great moment and that piece of her imagination.”

The softly meandering “Heartsick” recounts Rylie longing for home, but there’s also a sense of contentment in her melancholy. She defines it as being “very honest of where I was at at the time, which was just missing Seattle and being heartsick and feeling like I was on a mission in Nashville, but not fully understanding what that mission was.”

“Heartsick” turned out to be the genesis of Perigee (self-released Jan. 13 and available on Ryliemusic.com), an album Rylie didn’t even realize she was making, for it came about “very sort of kismet and haphazard.”

An example of that randomness is how grunge icons Alice in Chains inadvertently played a pivotal role with it. Chris, a longtime friend of the band, visited Alice in Chains in the studio while the group was recording 2018’s Rainier Fog, and guitarist-vocalist Jerry Cantrell introduced him to Nick Raskulinecz, the album’s producer. (Chris also contributed guitar to the Rainier Fog track “Drone.”) Chris played “Heartsick” for Cantrell and Raskulinecz, and the latter contacted Shannon Forrest, whom Raskulinecz felt would be a great fit because the session drummer also works as a producer. (Forrest’s performance credits include Tim McGraw, Carrie Underwood and Don Henley.) His instinct proved correct: Rylie began working with Forrest, Perigee’s producer-engineer-percussionist, and a team of musicians that she considers his “secret-weapons guys.”

“It was a really mind-blowing thing for me to just all of a sudden be exposed to so much experience and power and talent,” she says of recording Perigee at Forrest’s home studio in Nolensville, Tenn., for about a year as everyone’s schedules permitted.

While her primary instrument is her voice — which has a direct, pristine tone — Rylie plays acoustic guitar on several tracks. Although songs like “Laundromat,” “Before It Starts” and “Friend” “revealed themselves in a different color palette,” she says, she assumed at first that the music would become a Rue project, However, Chris recognized when they demo’d “Heartsick” that Rylie was showing him material borne from her own experiences that was essentially complete. His role as executive producer resulted from his wanting to function as “an enabler” so her music could be expressed as it should be.

Chris describes their creative relationship as one that doesn’t have a requirement in terms of its form or how it functions. “I really fell into the mode of wanting to help realize her vision on the song, and that really is what production is all about,” he says. “It’s fun for me because I have been on the other side of the glass [as an artist].”

“My dad would say probably that he wanted to help give me wings in this project a little bit because The Rue is something he and I always have,” concurs Rylie, adding, “That thing between us remains intact and doesn’t require outside people, whereas my thing very much can benefit from additional collaboration.”

The DeGarmo cowrite of the sassy “Fire and Gasoline” illustrates their connection. It was inspired by a rotten date Rylie once sat through. Some fathers would react to that news by wanting to wring the guy’s neck, but Chris’s good-natured response was, “‘Put on your creativity cap, girl. Write it out,’” says Rylie with a laugh.

“Fire and Gasoline” is one of several tracks that depart from The Rue’s jazz-infused singer-songwriter vibe, with “Before It Starts” being the strongest changeup. Rylie demo’d the song with her multitracked voice acting as both a soft beat and a ringing chime, and Forrest voted to preserve using her voice like instruments. The sounds are positioned alongside flickers of R&B elements that place the song in alternative pop territory. Watch the video for “Before It Starts,” which Billboard is exclusively premiering, below:

The song is also an attention-getter because she turns down a potential flame by telling them she’s got better things to do. Rylie chuckles when it’s pointed out that attitude is pretty cynical for her 26 years. “It’s not like I’ve had some extensive slew of horrible romances to lead me to write that song,” she notes. But right now, she’s “reprioritizing romance” to instead focus on her personal development, where she finds it “cool to disengage from that whole dynamic for a while and focus on being the best version of myself and trying to affect positive change in a world that needs so much of it and is changing so rapidly.”

Yet Perigee also has songs that could easily blend into the Rue’s catalog, like “Heartsick,” with its muted guitar notes and gauzy overtones. The gently wavering guitar lines and lightly skipping drum beats, as well as its dreamy quality and romantic sentiments, make “Forever For Good” feel like a cousin to Tori Amos’ “Your Cloud”; ditto for “In Stride.” Those pieces underline how Perigee, although it’s Rylie’s album, continues the musical conversation between her and Chris.

“It was fun to step away and yet still be involved,” says Chris. It was also a growth experience for him to act as executive producer, for it challenged him “to get behind somebody’s idea and vision of what it is that’s supposed to happen. Putting the right pieces in place, then trusting the outcome.” In recognizing that Forrest understood what Rylie wanted to achieve, “it was cool to just set him loose to take a different angle [with her material].”

Having bounced among Seattle, Nashville and Atlanta for the past three years, Rylie headed back down south a few months ago with the intention of forming her own band and booking some gigs, such as her Jan. 31 show at Nashville’s Douglas Corner Cafe. “Now that I have this cool personal project under way,” she says, “it’s been a nice vote of confidence of ‘OK, let’s get the ball rolling and see what happens.’ ”