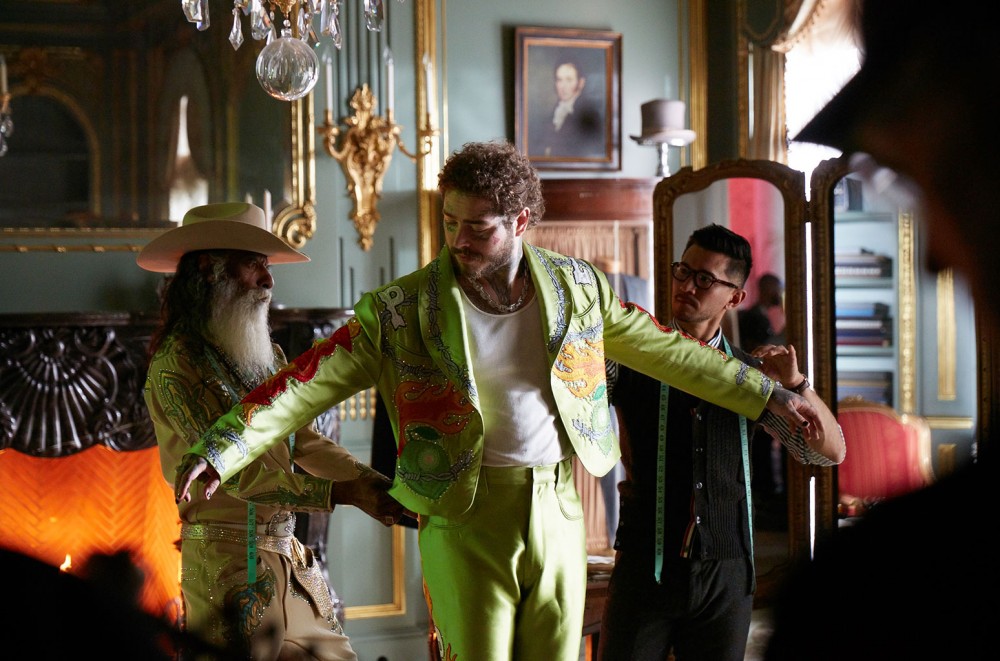 While Post Malone is known for throwing back a few cold Bud Lights, his love for Doritos isn't far behind. With one of the most recognizable faces in music, brands have an easy time wrapping their arms around the friendly superstar recording artist.

Posty stars as the face of the latest Doritos campaign in support of their newly launched Flamin’ Hot Limón flavor, which also introduces his Post Limón alter-ego. The entire movement is on-brand for the Grammy-nominated musician, as he drives a lime-green car, rocks a suit of the same color bedazzled with his alter-ego across the back, and even sports a Doritos chip face tattoo to stand out among his other facial artwork.

"I've been eating Doritos since I could walk," Malone tells Billboard of why it was so easy to get onboard with the chips giant. "They're in every green room and I've always been a big fan. I can eat a whole bag of every flavor and that's what I did last night. The chip is fire. They sent it to me and I tried it and I loved it."

Billboard caught up with Posty while he recharged back home in Salt Lake City before Sunday's (Jan. 26) Grammy Awards. The "Circles" artist touched on his Doritos campaign, what being Grammy-nominated means to him, how he ended up starring in a movie alongside Mark Wahlberg, and why Kanye West didn't make it onto his Hollywood's Bleeding album.

Get your first look at Post Limón in the Doritos commercial below, and check out the conversation after the jump.

Billboard: How did your partnership with Doritos for their Post Limon campaign come together?

Post Malone: They reached out and wanted me to do some content for the Hot Limon chip. We did a whole commercial and I thought it was hilarious. I can't wait for people to see it. We had a lime green suit, a lime green car, and a face tattoo of a Dorito. So they really understand me. Chips and face tattoos. "Post Limon" just flows right off the tongue. I'm excited for people to try it out.

With you nominated for another two Grammys thanks to "Sunflower," were you surprised to see that song dominate the charts so long?

I really owe it all to the fans and the people that worked on the song. It was really exciting to see that kind of reaction to the song with positive vibes. I was honored to be part of the Spider-Man movies — one of my favorite franchises. It's so cool that people like the music and are listening, that's the biggest blessing in the world.

What does it mean to you to be recognized as a Grammy-nominated artist?

It means a lot. I'm happy people are listening and people care about the song. I know it was an important song for a lot of people. A lot of people are going through tough times, and me and Swae [Lee] wanted to bring some sunshine into people's lives. To be nominated, it feels great. I'm excited to see all the talented artists win a bunch this year. [Ed. note: Malone was nominated for record of the year but lost to Billie Eilish, and for best pop duo/group performance, which ultimately went to "Old Town Road."]

You're starring alongside Mark Wahlberg in upcoming Netflix film Spenser Confidential. How did that come about, and what was it like acting in your first movie?

It was cool — my first real acting gig with all the cameras, lights, actors, and a director. Mark hit me up and asked me, "Do you want to be in this movie?" I was like, "Yes, of course I want to." He brought me out and we did the scenes. He was so professional, but everyone was so helpful, even though they knew I was nervous. They all took really good care of me. The movie's great.

What's the inspiration behind your new face tattoo?

Oh yeah, that was me and my friend Kyle. We've been trying to get a face piece for a long time. We were like, "Let's just do it!" I'm already ugly enough. It's cool in the new Doritos commercial I got a new face tattoo that's awesome. It's time for my face tattoos in real life. They don't hurt too bad, but I got these really puffy cheeks.

Check out Posty's gauntlet! This is how he rung in the new year. #postmalone #NewYearStartsNow pic.twitter.com/4jW2Chxylg

What other collabs do you have coming up? We know you have something coming on Justin Bieber's album.

I don't know how much I can talk about it, but we did something…

Why didn't Kanye West end up on Hollywood's Bleeding's "Internet?"

He produced and wrote a bunch on that song. We heard the song and thought it was really awesome, so we finished it. Originally, it was supposed to be a whole verse by him and the timing didn’t work out. So we put some instrumentation on it and used it more as an interlude, but shout-out to Kanye though, he’s a genius. [Ed. note: a version of "Internet" featuring Kanye West reportedly leaked in May 2019.]