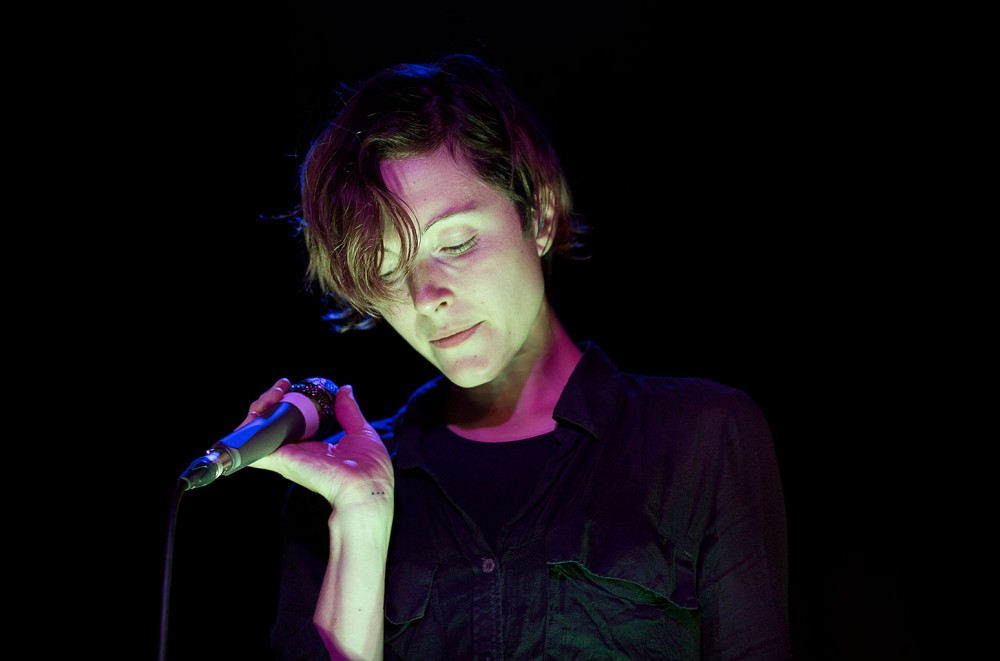 Channy Leaneagh’s voice often sounds like it could break at any moment. Take the song “Someway” off Poliça’s 2016 album United Crushers, where she sings about pregnancy and fearing the loss of her personal freedom — you can almost hear the words cracking as they exit her lungs. On her synth-pop band’s new album, When We Stay Alive, you can literally hear her gasping for air. That’s because parts of the album were recorded while she was wearing a brace.

Two winters ago while she was installing pantyhose filled with sodium chloride to stop ice dams forming around the rim of her roof — a technique she learned on YouTube — Leaneagh slipped and fell 10 feet to the ground below. “I’d been doing it quite a bit, but on this particular day my feet slipped,” the singer explains from her home in Minneapolis. “I compressed my L1 [vertebra] and I couldn’t walk — I had to crawl through my backyard and into my house to call for help.” She then spent the next few months in stasis, unable to work, clean, or even take care of her two children.

When it came to music, though, the fall wasn’t so much a set-back as an opportunity to finish the album she’d semi-abandoned. In 2011 when Leaneagh and producer Ryan Olson formed Poliça to make use of R&B and hip hop-inspired compositions that didn’t quite fit their Midwest softrock group Gaygns (Olson founded the group and Leaneagh performed as a back-up singer. Justin Vernon of Bon Iver was also a member), the music industry was a little different. Viral hits still had a limited shelf life, and it was far more lucrative to be consistent than it was to rely on having a single blow up online.

Leaneagh, Olson and their bandmates (bassist Chris Bierdenand, drummers Ben Ivascu, Drew Christopherson and dozens of other collaborators) have always relied on their consistency to keep themselves in the business. But when the industry suddenly flipped in favor of songs that sound good together on a playlist — and Leaneagh was simultaneously told by Poliça’s former booking agent that opportunities for the band were no longer forthcoming because they didn’t write enough catchy pop songs — the 38 year old decided to return to being a nursing assistant (something she’d done in her early twenties, though she never finished nursing school).

“My mom was a nurse for 40 years; she helped a lot of people, could always find a job and support the family,” Leaneagh explains. “That seems more stable than what I do.” However for the next three months, at least, music is back on the agenda — Poliça is touring the U.K., Europe and North America from February through to May.

When We Stay Alive addresses the idea of cheating death, but the album isn’t simply about trauma or the survival instincts that kicked in after the accident. “TATA,” with it’s bouncy synth blips and dark, doomy rhythms was inspired by meetings Leaneagh attended between the North Minneapolis community and a recycling company accused of lead pollution. “Steady,” where Leaneagh softly croons over an acoustic guitar and a groovy bass riff, is about recognizing her strengths and weaknesses as a parent. Like all Poliça songs, Leaneagh’s tempestuous voice enjoys the spotlight.

Leaneagh took time to chat with Billboard about letting therapy shape her music, recording from a makeshift studio in her bedroom and maintaining Poliça’s unique rules towards collaboration. The conversation has been condensed for clarity.

How did the accident impact the music you were making at the time?

Before the fall I had written six songs [for When We Stay Alive], but I was kind of moving away from music. I was in a really negative place, I thought I’d failed. I was not getting a stable income from music and I was not getting any more opportunities, so I’d started going into nursing.

The big thing the accident gave me was time. I couldn’t work, clean, take care of my children or even leave the house, I just had to be inside all day with my own mind. So I thought, “Well, now I have some time,” so I started writing again. It’s not like the rest of the album is about the accident, it just made it so I had the ability to do it.

Your doctor suggested that you try a visualization technique to rewrite the story you had told yourself about the accident. Have you applied this technique to other parts of your life?

He said this is a physical issue, but you also have to fix the emotional stuff that’s feeding it. So by doing visualizations — for instance, right now I’m really terrified of going on tour. I’ve been home for so long, I’m nervous about leaving my kids — I’m able to balance my mind, take some deep breaths, and imagine what it would be like on the road. Instead of imagining the worst I’m thinking only that things will be well.

Is this what the song “Be Again” is about?

I have had some sexual violence in my past — when I was a little girl and in my twenties — it’s something that I have been to a lot of therapy for and it seemed to be settled, but it would just come back uninvited. It’s one of those things that I wanted to take completely out of my story, because it just wasn’t serving me anymore. So the song “Be Again” is about taking ownership — the idea was to have this mantra that retakes ownership of your body. It’s a love song to yourself, to the parts of yourself that hide away or that take over when you’re in a fearful situation.

Alex Proctor, who contributed to the song “Little Threads,” set up a makeshift studio in your bedroom so that you could record while you were recovering from the accident. Did any of the music you made during this period make it onto the album?

Just so it doesn’t sound like some Charlie and the Chocolate Factory-type situation, I could actually stand, I wasn’t recording from my bed. “Be Again” has this quality to it where I’m kind of gasping for air. It was one of the first songs I recorded after the accident in the studio that Alex made for me. “Feel Life” was also recorded very soon after, maybe a month after the accident, so they both have a kind of falsetto quality because I was learning to sing with a brace on. I recorded them again without the brace, but we ended up liking the way they sounded originally.

How often were other band members visiting you and sharing their ideas?

We don’t really do that. From the very beginning Poliça has always had this policy which sort of fits the name, it’s more of a creative outlet for all of us. Ryan sends me a skeleton of a beat, I respond to it with whatever I’m doing — then he might just cut it up, he might be like, “That’s not where the chorus goes, it goes here.” And I never really object, I’m good with it. Then Chris [Bierden] (bass and vocals) will add stuff.

With this record, a lot of Ryan’s friends who are producers would add something, or another person would add a single guitar line — there was a lot of collaborating and collaging. But when I record, I’m alone in my own space. No one ever tells me to sing something different in Poliça.

“TATA” was inspired by meetings between the North Minneapolis community and Northern Metals, a recycling company who has been accused of pollution. Why did you decide to write a song about that?

When I moved here no one knew me, I grew up on the Southside of Minneapolis, I moved to the Northside to raise my family and I wasn’t aware of this ongoing battle with Northern Metals. So I was brought up to speed with it and I started going to these community meetings. Then I planned this documentary screening — we were going to project onto this factory on the river that was polluting and shredding metal that contained lead. It was just a movie night for the community and it didn’t cost money, but I was told that people on Facebook were getting really mad, saying “who is this person? She didn’t ask us if she could have this benefit.” These were people that had been fighting the [factory] for longer than me.

So I walked in a little ignorant without learning the hierarchies that were established, and I learned a lot right away. But at every meeting, there was so much fighting and yelling, and we had to be careful not to yell at each other because we were trying to unite against Northern Metals. It was this constant temptation and it really brought out in me this feeling of being a snowflake or something, because when people would start yelling I’d get really anxious. It was constant conflict. So seeing how these things bring out things in yourself and in other people, it inspired me. I was interested in how the conflict brings out different personalities in all of us.

In the past you’ve been described as an “unlikely front woman.” How do you feel about that description now?

I’m still working on not being embarrassed by my own image. I think I’m unlikely because I don’t have the confidence that other people have. I feel confident when I’m on stage singing and I feel good when I’m writing songs with other people, but I just don’t feel like I know how, or even want to sell myself (or be fancy or desired). Thought I try to not make a big deal out of it. This is where I am, so I’m just trying to follow the movie Frozen 2 and do the right thing.