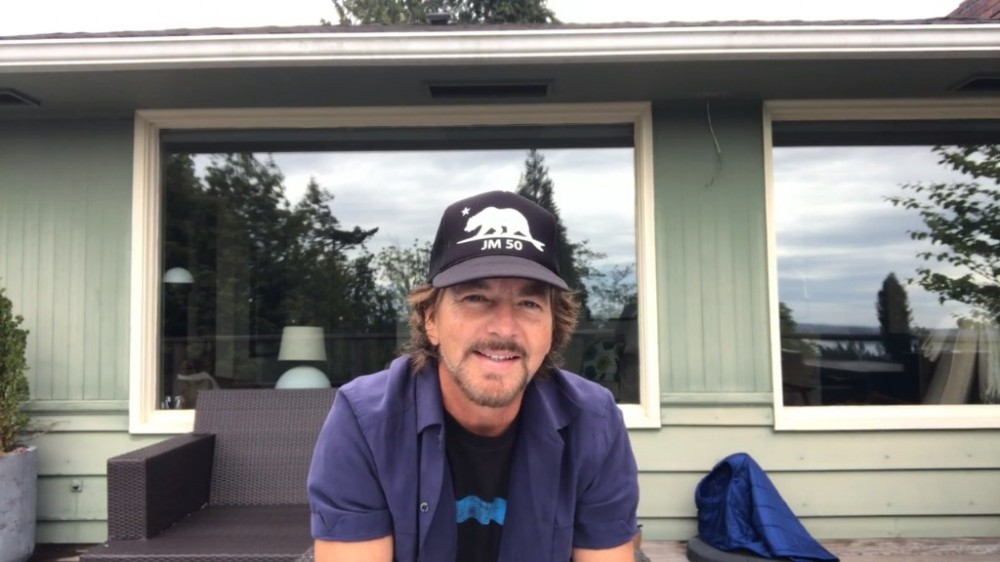 Eddie Vedder announced Thursday (April 30) that he and Pearl Jam are joining the ALL-IN Challenge, offering up the ultimate birthday celebration for a PJ superfan to not only spend time with the band, but even influence what they play at a concert. Vedder took to Pearl Jam’s Twitter to announce the news as part of Philadelphia 76ers co-owner Michael Rubin’s ALL-IN Challenge, in which celebrities — so far including Madonna, Drake, Justin Bieber and many more — are giving away their most prized possessions or once-in-lifetime experiences to provide a helping hand to those in need of food during the COVID-19 outbreak. You can watch his full announcement video above.

So picture this: On your birthday (or on whatever day you feel like celebrating your birthday), you and a friend will sit in on a Pearl Jam soundcheck before sitting down with Vedder himself to work on the night’s setlist. At the show, you’ll have great seats for the first half before being whisked to the side of the stage to watch the second half from the wings, where you’ll act as Vedder’s guitar tech, enjoy some wine from his personal stash and then hit the stage to be serenaded by the crowd with “Happy Birthday” — regardless of whether it’s your actual birthday. Oh, and Vedder will throw in a Fender Telecaster guitar, too, signed by the full band.

Vedder was nominated for the challenge by actress Laura Dern, and he accepted without hesitation. “Everybody’s missing each other right now, and I just want to tell you that we’re missing you too,” Vedder says in the video to the band’s fans, who have created a community amongst themselves by attending shows together over the past three decades.

The frontman sounded most pumped about offering up his vaunted vantage point to the lucky fan. “For at least one song, I’d like to have you onstage right where I stand in the middle there — or 6 feet away,” he laughs, “but to be up there and hear the stage sound and be surrounded by these great musicians at loud volume. Even just to stand in front of the great drummer Matt Cameron, directly in front of him, is a true thrill. You’ll feel some vibrations that are maybe ones you haven’t felt before. They’re ones that I’m lucky enough to feel all the time.”

The band is known to switch up its setlist at every show on a tour, so the most thrilling aspect of the opportunity might be the chance to influence that very setlist. “Maybe you can help add a couple of song requests to the setlist — within reason,” Vedder says with a smirk. “Or a challenge, whatever. You can challenge us.”

Since its April 14 launch, the ALL-IN Challenge has raised more than $25.8 million for No Kid Hungry and Meals on Wheels, as well as America’s Food Fund, which benefits Feeding America and World Central Kitchen. Find all the ways you can donate and bid here.

Above, watch Vedder’s full announcement video — in which he next challenges MLB exec Theo Epstein, currently the president of baseball operations for the Chicago Cubs, as well as Treehouse Masters star (and Vedder neighbor) Pete Nelson — and read what Pearl Jam’s ALL-IN Challenge opportunity entails below.

No matter when your birthday actually falls, you can choose which day you and a guest celebrate big with this never before offered Pearl Jam Birthday package.

Join legendary Pearl Jam frontman, Eddie Vedder, for a concert experience you’ll never forget. You’ll start the day off with a soundcheck, where you’ll work with Eddie on the setlist for the night. Enjoy your view from good seats and then the soundboard for the first half of the show, and take your spot on the side of the stage for the second half. While you’re up there, Eddie will put you to work as a crew member and also share a bottle from his personal red wine stash with you. You’ll ultimately join Eddie and the band on stage for a “birthday” celebration, where the crowd will sing to you and you’ll get to blow out the candles on your cake. After an unforgettable night, you’ll take home your gift — your own Fender Telecaster guitar, signed by the Grammy Award-winning band.