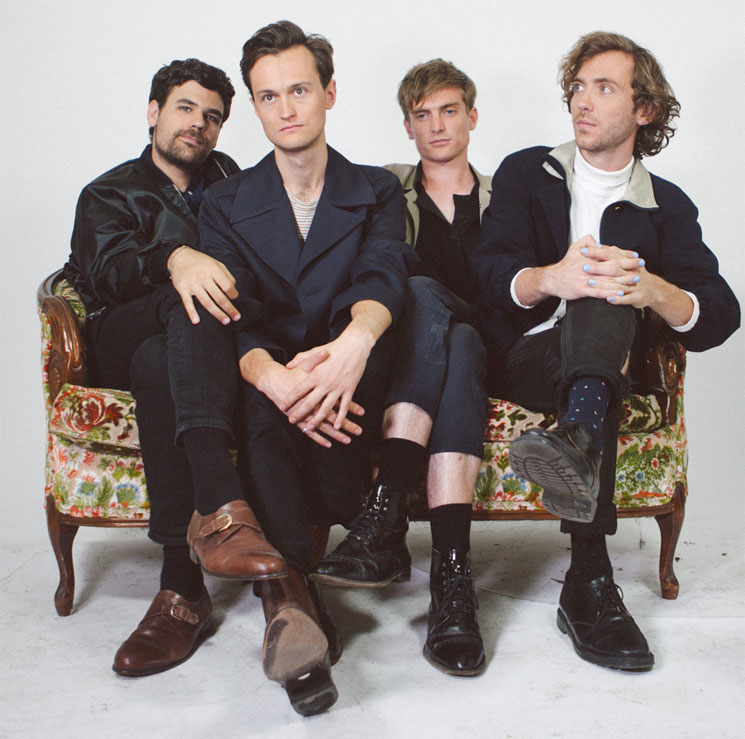 When they first signed to Constellation Records in 2014, Montreal post-punks Ought dropped a burst material that quickly earned them international attention. Released in an 18-month stretch, their first two albums, More Than Any Other Day and Sun Coming Down, plus the Once More With Feeling EP, were explosive and scrappy, finding heartfelt truths in the mundane.

But when Ought re-emerged several months ago with album number three in tow, things were a little less ragged and a little more refined, with new homes on Royal Mountain and Merge Records. True to its name, Room Inside the World is simultaneously more spacious and intimate than its predecessors, opting for a more controlled atmosphere.

According to vocalist/guitarist Tim Darcy, this was the plan even before the band stepped foot inside the studio. “The push behind the first two records was that we really saw ourselves as a live band and that had been a lot the drive behind Ought until that point,” he says. “We wanted to make records that would capture that live feeling and that sense. We tracked everything at the same time in the same room. We knew that we wanted to not do that again and we wanted to combine that with a more studio-heavy approach. We knew that if we were gonna make that we were gonna have to think much more intentionally about the types sounds that we wanted to get on our own before we went into the studio.”

The resulting shift in thinking found the band slowing down their process, spending plenty time discussing their interests, goals and ideas before going in to write the songs. “We made these digital mood boards and sent around all sorts things like whole albums and specific songs and uploaded random ephemera from the internet and it just became this repository our weird subconscious output over the period a couple months,” reveals Darcy.

Though the frontman was tight-lipped on what was on said mood boards — “There’s a lot crap on there for sure,” he says — they found the band moving forward in a slower, more synth-focused direction. “We all have a pretty similar relationship to synths and that’s a good thing because we wanted to use them in the Brian Eno way and not use them in a way that would be too ’80s, not that there’s anything wrong with that.”

Part what gave the band the ability to expand their instrumental palette is by slowing things down, making the songs melodic. Whereas the Ought songs old were spastic bursts guitars and Darcy’s frenetic yelp, the synths have helped lead the band into a smoother direction, opening up the songs to include more Darcy’s singing. “That was something that everybody in the band was really open to or into. It changes the way that we write, making more room for the vocals as a melodic element,” he says.

“As far as vocal inspirations for me, I’m really drawn to very authentic voices. Very engaging lyricists and that sort thing,” says Darcy. “I find that I’m pulling from two distinct camps and I’m putting them together. There are people like Bob Dylan that are these sort harrowing vocalists where they really present a very authentic and driven sort lyric conveyor, and then there are other people like Judee Sill where there are really potent lyrics but it’s also about the sort melodic movements in the voice. I like both those things equally and I find that I draw from both.”

The best manifestation sonic space on Room Inside the World comes during centrepiece “Desire,” where synths and vocals give way to full band anthemics featuring Toronto-based volunteer chorus Choir! Choir! Choir!, whose appearance elevates the song to new heights. It’s a technique Darcy also employed on his 2017 solo album Saturday Night. “For me, personally, I love a lot soul music,” he says. “It’s just a texture that I’m drawn to in the right circumstances.”

Speaking about “Desire,” Darcy says “The way that Choir! Choir! Choir! are deployed, they’re not really doing a gospel choir thing or anything like that. They moulded themselves to the song in a different way, and I’m really happy with what they were able to bring to it.”

Despite the studio-centric thinking in creating the record, there’s nothing like an Ought live set, and the band are excited to take the songs on the road on their upcoming headlining tour. In preparation for their upcoming shows, the band slowly worked the new songs in to last fall’s tour dates with fellow Merge signee Waxahatchee.

Says Darcy, “It’s always the case that playing the song once live is the equivalent practicing it 40 times as far as how much you learn about performing that song. Now we’ve really worked through a lot the kinks what to do with the new songs. We’re feeling really solid and really excited for the headlining tours.”

Room Inside the World comes out February 16 on Royal Mountain Records/Merge.