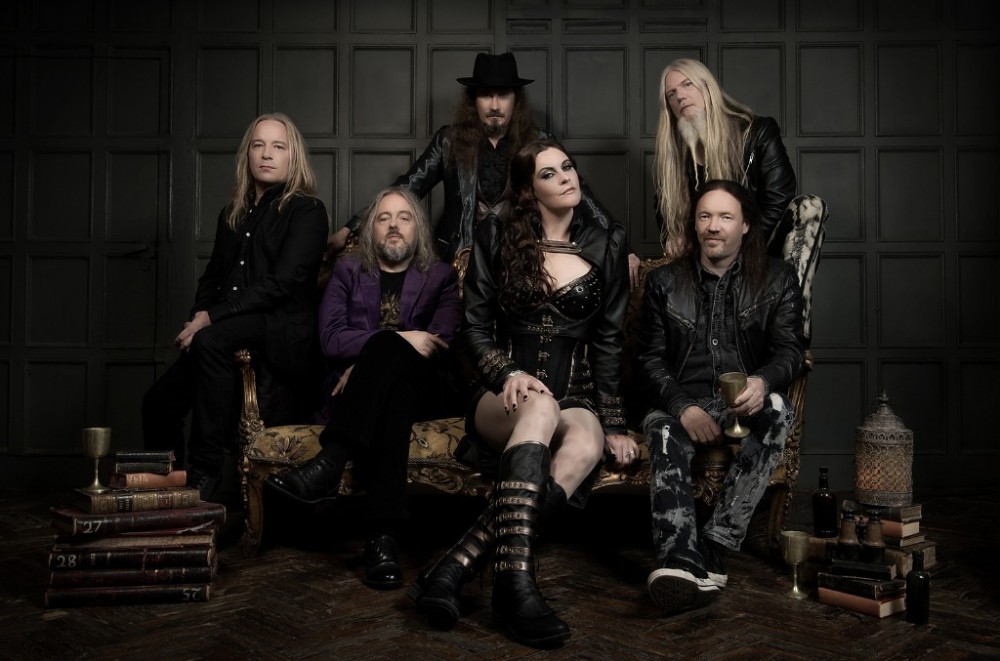 The vocalist says an upside of sequestering is “more time than ever to write some music.”

It’s been a surreal time for Floor Jansen, and the Apr. 10 release of Nightwish’s double album, Human. :||: Nature., has admittedly felt a bit strange for her.

The singer has been sequestered with her husband, Hannes, and daughter, Freja, at their peaceful country home in Sweden, and while she says things are less panicked there with regard to the coronavirus pandemic, they are still taking precautions. (She previously revealed that a couple of relatives contracted and recovered from the virus.) The album arrived on Nuclear Blast Records with online fanfare and toasts via webcam from band members, but the event somehow didn’t seem like it was real, especially given that the album was five years in the making.

While Jansen and the symphonic metal band have flown below the radar of her Dutch homeland, her appearance on Dutch music show Beste Zangers (Best Singers), which aired last August through October, turned that all around. On the program, a group of singers of varying notoriety went to Ibiza to learn various songs to perform each week. The “best singer” had their song released as a single.

Jansen did Beste Zangers to change narrow-minded views about metal, and to show her dynamic range. She tackled genres like Latin pop and reggaeton, and being chosen as the best singer on three different weeks led to the recorded performances being officially released. She scored three No. 1 hits in Holland, including a cover of Lady Gaga and Bradley Cooper’s “Shallow,” and a soaring duet with Dutch opera singer-actor Henk Poort on “The Phantom of the Opera.”

As a result of her newfound Dutch celebrity, Jansen booked 10 solo shows in Holland in February at 500- and 1,000-seat venues that quickly sold out. Along with two Beste Zangers performance dates scheduled for late May, the final show — which was scheduled for the 6,000-seat AFAS Live in Amsterdam — has been postponed because of the coronavirus crisis. The shows let her focus on both softer and harder renditions of songs, including material from her previous metal bands After Forever and ReVamp.

“It was supposed to be quite [different] from Nightwish’s big productions,” Jansen tells Billboard. “This is something else, and it was nice for me to do something a bit easier. Not that I needed to slow down, but it’s nice to create a contrast.”

Watch a message from Jansen during self-quarantine below:

The resultant media explosion  led to her being booked at the Dutch festival Pinkpop and Nightwish for two nights at Amsterdam’s 17,000-seat Ziggo Dome, a huge achievement for the band. (Those events are also postponed right now.) Jansen feels gratified that, despite Dutch media originally missing the boat on Nightwish’s music, her homeland now appreciates her vocal prowess and the diverse Finnish group that has turned her into a global name. Human. :||: Nature. debuted at No. 2 and No. 11 on Billboard’s Hard Rock Albums and Top Rock Albums charts, respectively, and has accumulated 246.3 million on-demand streams, according to Nielsen Music/MRC Media.

While past Nightwish albums frequently offered lyrics focused on nature and fairytale themes, keyboardist-composer Tuomas Holopainen has spoken about how themes revolving around humanity — everything from empathy to imagination to technological interaction — unite the new album. Jansen notes that the record is mostly concerned with the real world.

“It’s all pretty real-world apart from [the song] ‘Pan,’ ” she says. “But that’s not really about fairy tales but about [their positive effect] people. The previous album took a side step away from the more made-up world into the real world and the magic of the real world in that sense.”

The lead single, “Noise,” was inspired by the hit dystopian series Black Mirror. While the video — which has over 3.9 million views on YouTube — features fairy-tale characters like Little Red Riding Hood and Jansen as Snow White’s evil stepmother, the appearance of smartphones and selfies, plus some apocalyptic sci-fi imagery, frames it in a modern context. The clip ends with a sunset in a forest to remind people of the natural world that’s there to be enjoyed instead of time-sucking digital devices.

The “human” part of the album features nine songs, whereas Jansen says the mostly instrumental eight-part suite “All the Works of Nature Which Adorn the World” is Holopainen’s love letter to nature. And the orchestral music is not as bombastic as some might anticipate: in fact, it has a lot of quieter moments that help make it Nightwish’s most nuanced album.

“It left some space for other things to grow and to get big,” concurs Jansen. “There is no orchestra on the part of the album where the band is on. There are synthesizers and a string quartet and choir.” She adds that following the 2015 release of Endless Forms Most Beautiful, which featured a full orchestra and two choirs, “people started to wonder, ‘How much bigger can it be?’ It can’t. Then it becomes bigger by less. The less-is-more kind of thing where the focus shifts to different things.”

Multi-instrumentalist Troy Donockley and bassist Marko Hietala provide a multitude of backing and harmonic voices. On the Celtic folk song “Harvest,” Donockley handles the lead vocals. “We played around with voices way more,” says Jansen. “There’s more space for instruments individually, which in music like this is a blessing sometimes.”

While Jansen makes performing metal growling and operatic high notes sound easy, and Holopainen writes the music and lyrics, they work meticulously together on what sounds right for each song. The singer notes that the track “Shoemaker” was “a real puzzle,” particularly its operatic coda. They were satisfied with the initial vocal takes but felt that the singing had not quite hit the mark. Jansen did another pass that sounded better, but she still felt like she was struggling with it. Once the choir was injected into the mix, she sang along with those tracks and rerecorded herself at home. She nailed it.

“For some reason, the choir gave me the feel that I was missing before and the right flow,” she says. “It’s really, really tricky to get it sung right. But then it was just there. It’s so cool how that works. That’s technique but also just how music works and how feelings work. I sent it back to Tuomas, and he said, ‘Yes, that’s it.’ ”

Opening track “Music,” with its unconventional rhyme scheme, and some verses in “Shoemaker” required great vocal acrobatics that took Jansen time to master beyond singing the words and getting the timing right. “There needs to be a flow; there needs to be a story,” she stresses. “The heart and feelings need to be behind it. It’s one of those things once again where you can’t really put your finger on why, but I think a lot of that lies in adding the right emotion to it. You can only do that when you’ve technically got it. From the moment I got the [new] music to the actual recording, I’ve been rehearsing and rehearsing for several months. Usually, I don’t need to study very long to get it right. But I was very challenged.”

Jansen will have extra time to prepare for Nightwish’s next European tour, which is still scheduled to begin Nov. 16 in Oslo. But she’s also taking advantage of the unexpected break.

“It would be a shame if I didn’t do anything with it,” she says. “It now gives me more time than ever to sit behind my piano or guitar and write some music. I have not done that in years. I think more people in the band are just picking up their instruments and jamming away. You can’t really stop a musician from playing music. It doesn’t work that way.”