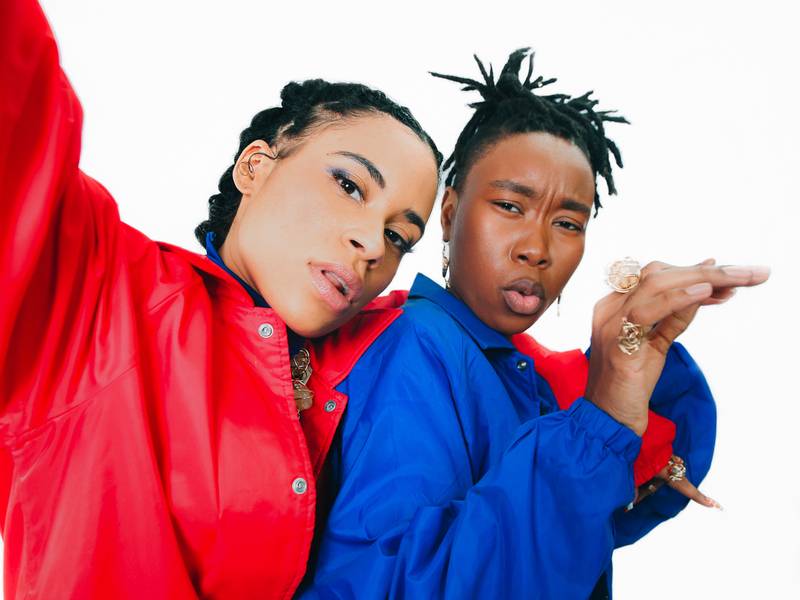 Mother Nature is looking to take the next step in their career with the release of their Portalz EP. The Chicago-based duo has linked up with hometown label Closed Sessions to assist in their journey, joining a roster featuring the likes of Jamila Woods and Ajani Jones.

Before Klevah and TRUTH ignite a new fire by dropping their project on May 8, the two gives listeners a taste of what’s to come with their “Rotationz” single. In addition to premiering the song’s video shot on green screen, Mother Nature chats with GroovyTracks about their progress in the music industry and what it’s like doing an EP campaign during a global pandemic.

GroovyTracks: How are y’all doing during these strange and difficult times?

Klevah: We’re doing alright. It’s been a challenge. There’s been ups and downs. We actually live with a good amount of people. It’s our art collective, so there’s a lot of creative energy for sure and just keeping the ball rolling. But also the reality of this, everything is real.

GroovyTracks: I know this pandemic has turned life upside down for many artists, so it’s good to hear you’re OK. For anyone that’s never heard of Mother Nature, how would y’all describe yourselves? What do you bring to the table?

Klevah: Raw energy, versatile, nourishing, but at the same time, brutally honest. I feel like we’re really true to our name, Mother Nature, being just of multiple forces. Sometimes it can be destructive, but all in all, it’s creative and it’s for you. Yeah, that’s our sound. It’s eclectic, it’s groovy, it’s bars. It’s everything.

GroovyTracks: You’ve debuted your “Rotationz” single here on DX. Can you detail the background of this song and what went into making the video?

TRUTH: “Rotationz,” we’ve had it for at least about a year or so now. The homie that produced it, Jimmy Park, gave it to us a while back. It’s kind of like a couple of songs in one at this point. It started off just a little melody on it and we ended up adding some verses to it.

We did the visual aspect with the homie FlyShotz of the Gr8thinkaz. We shot it all in house, so really in the crib, green screen. This is our first time doing that so that had its moments and hiccups, but it also just opened up to our ability to do things in our DIY style and got even further with it. Given everything that is happening in the world and not being able to go outside and stuff like that, it’s just allowing us to expand more on that rim.

But definitely for people that are just tuning into Mother Nature, it’s definitely a more upbeat vibe, too. I think our past music has definitely been more geared to our darker, punk type of side. This one is more light and energetic in that type of way. I think people are going to gravitate to it well.

GroovyTracks: You mentioned filming it in the house. How recently did y’all shoot the video? Was it amid all this craziness?

But it was definitely during the quarantine because we were making plans for all of our vision for the project. And we had a lot of very simple DIY ideas, but they all involve being out in nature and wanting to stay true to that. But that just became something where I was like, “Nah, that’s not really smart.” So, we just did what we had to do. Keep it simple.

GroovyTracks: Understandable. You linked up with the Closed Sessions ahead of this new EP. How did that deal come together and what kind of opportunities have emerged since your signing?

Klevah: have been in Chicago now as Mother Nature for four years. TRUTH is from here. I’m from Champagne and that’s where we met at school and whatnot. But coming back out to Chicago, Closed Sessions, we just kept hearing about it. I had a homie that was interning there at the time.

Our homegirl Jamila [Woods], who was on the label for her HEAVN project, she was giving good word about them and whatnot. It kind of was just a seed that had been planted. But we just kept it where it was and kept working. Working on the sound, working on our artistries and whatnot. Then I guess the conversation just came back up, we’re thinking about taking things higher, doing things greater.

We know what we’ve been able to do on our own for the last two or three projects. We’re like, “Let’s see what we can do,” and we started having that conversation and it was love. Big shout out to Kevin Coval here in Chicago also was like a person saying that would be a good look for y’all. So yeah, we find it to be really in alignment with our goals right now. Working in the studio with Mike [Kolar] and Alex [Fruchter] has been dope. We been happy; we’re so excited for this push. I think it’s going to be greater than what we’ve done so far, the receptivity of it all.

GroovyTracks: Nice. What was the timetable in terms of signing? How recently did y’all ink the deal with them?

TRUTH: It’s been about a year. we’ve been going back and forth for probably six, seven months. We was figuring out contractual things and what makes sense, what we want on our end because we still wanted it to be a partnership. Just making sure that that was all in black and white. But Alex and Mike are good guys.

They definitely laid it out point-blank to us what it is, what it isn’t. They gave us a good view of what being in the industry is when it comes to what a contract looks like once this is over and if something else comes along. It’s good just to know what we want and what we don’t then to be able to make sure that everybody is winning in the end. It’s been a great opportunity thus far. I’m looking forward to more and more music with Closed Sessions and continuing to open more doors and just broaden our horizons.

GroovyTracks: That’s great. Your new single “Rotationz” is building up to the Portals EP. What can fans expect from this project and how does it differ from your past work?

Watch Mother Nature’s “Rotationz” video above and look out for their new EP, which drops on May 8.