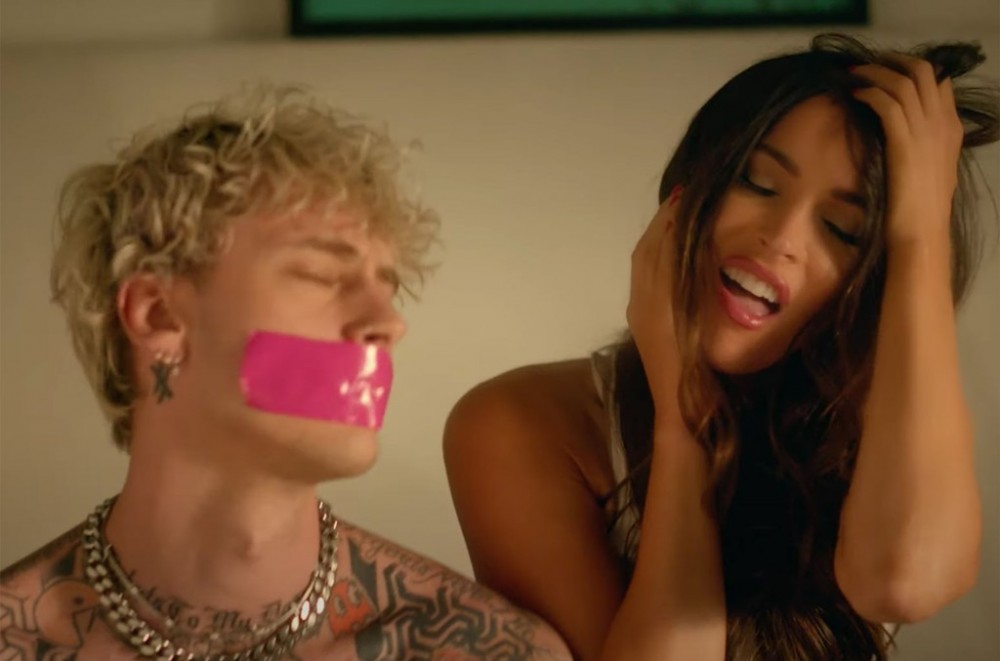 Machine Gun Kelly unveiled the music video for his new single “Bloody Valentine” on Wednesday (May 20), and it’s nothing short of a hostage situation.

In the Michael Garcia-directed video, the rap-rocker wakes up next to none other than Megan Fox, who proceeds to tie him up and take him prisoner. As the visual reaches its climax on the final chorus, Kelly finds himself stuck in the bathtub with his captor using the classic “blow-dryer as a microphone” shtick before things get, well, rather shocking for the musician.

“I don’t do fake love, but I’ll take some from you tonight/ I know I’ve got to go but I might just miss the flight/ I can’t stay forever, let’s play pretend/ And treat this night like it’ll happen again/ You’ll be my bloody valentine tonight,” Fox playfully lip-syncs over Kelly’s vocals on the chorus, toying with the shirtless rapper and playing a bright pink electric guitar as his mouth is taped shut with similarly-hued duct tape.

“Bloody Valentine” serves as the lead single off MGK’s upcoming Travis Barker-produced pop-punk album, Tickets to My Downfall, which is set to be released July 17 via Bad Boy/Interscope Records. (The Blink-182 drummer also provides the single’s relentless beat thanks to a guest turn behind the drum set.)

Coincidentally, the video for the song arrives just days after Kelly was spotted with the actress in public. The Transformers star’s husband, Brian Austin Green, then confirmed on his podcast, ... With Brian Austin Green, on Monday (May 18) that the couple had split after nearly 10 years of marriage.

Watch Machine Gun Kelly find himself at Fox’s mercy in the “Bloody Valentine” video below.