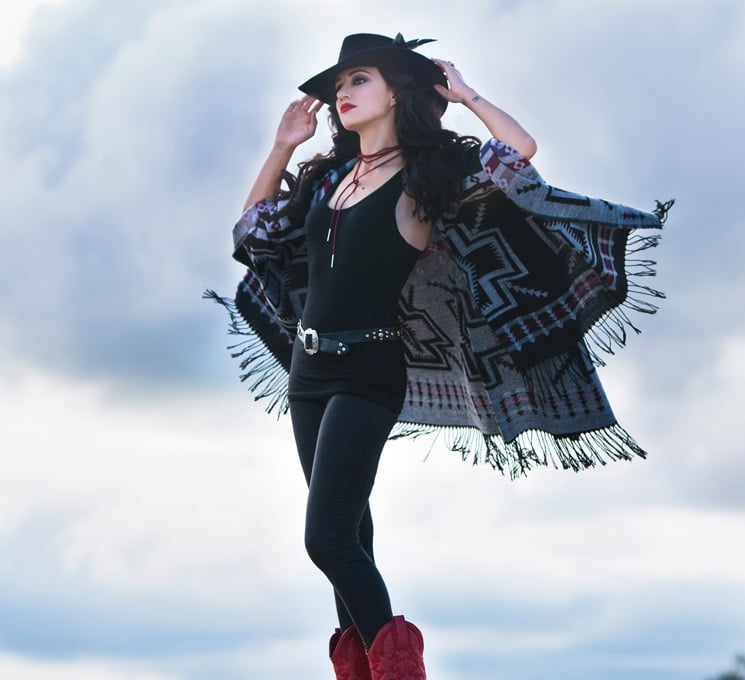 Lindi Ortega was born in Toronto and currently lives in Calgary, AB. Her new album, Liberty, is a concept album about a personal renaissance in an effort to help others. Some hidden challenges include navigating the business side music. “Now, I am much more aware it and I think it would have been to my advantage to have that knowledge when I was younger,” she says.

For Ortega, Oscar winner Ennio Morricone is the motivation for her musical development. Produced by Nashville’s Skylar Wilson and recorded at East Nashville’s Battle Tapes studio with the band Steelism and Charlie McCoy, Ortega’s Mexican and Irish roots manifest in her recent tunes — she sings in Spanish to give the music an authentic connection with her Mexican heritage.

What are you up to?
Supporting this new record that’s coming out on March 30 and touring it. I don’t have all the Canadian tour dates memorized, so I don’t know fhand when that is all going down.

What are your current fixations?
I was watching a Netflix] show called Ozark that I got really into. The last book I read was Neil Degrasse Tyson’s Astrophysics for People in a Hurry, and the last music I listened to was Colter Wall. I’ve just started to really get into cooking; I made this dish called Teriyaki Brussels Balls and it’s pan fried Brussels sprouts with meatballs and then there is garlic and teriyaki and I just kind put the Brussels spouts over the meatballs and it is quite yummy.

Why do you live where you do?
I got married in May and] I moved to Calgary. My husband’s Canadian, which was perfect because now I have free heath care again, which is awesome.

Name something you consider a mind-altering work art:
My favourite work art comes from Leonard Cohen. He’s one my inspirations, not only musically, but poetically. I like his poetry and I like his music. I am sad that he is no longer with us, but I think he is a great work art.

What has been your most memorable or inspirational gig and why?
I think one my most memorable tours was opening up for k.d. lang across Canada, because she is one my favourite female vocalists and it was really amazing to watch her perform. I learned a lot on that tour from her, as a performer and a singer, and also as a fan.

What have been your career highs and lows?
Career highs: Playing the Grand Ole Opry twice, I got to do that. It was cool, because a lot my musical heroes have done that. The first time I played it was at the Ryman auditorium, which is known as the mother church country music in Nashville and it is a very historic venue. The second time was a larger venue for the Grand Ole Opry.
Lows: I mean the industry is — it’s a difficult one to try to survive in. I guess at the level that I exist at, there are always highs and lows from month to month. Sometimes you don’t know how much money you are going to bring in. It is not like a regular job — it can be a little bit difficult to financially survive in this business. That actually almost drove me to quit music one time. Another low is getting sick on tour. Nobody likes that. It’s not fun. I have gotten sick on tour quite a few times.

What’s the meanest thing ever said to you before, during or after a gig?
Somebody yelled at me that I suck during a gig. I had somebody who once, a long time ago, wrote a blog post just laying into me after I played a show, and it was more than just them not liking the music. It was a personal attack. So, that wasn’t very nice.

What should everyone shut up about?
“Y.O.L.O.” I think that can be retired. I am kind over that.

What traits do you most like and most dislike about yourself?
I’m pretty resilient whenever I am faced with any kind adversity; I usually just keep going and try to rise above. My worst trait might be that I have moments, just like everyone else, where I doubt myself or doubt my abilities. I have to learn to have more confidence in myself.

What’s your idea a perfect Sunday?
I just like hanging out with my husband and watching movies on Netflix and getting in our pyjamas all day and eating. Ordering a pizza, eating some good junk food, having some wine.

What advice should you have taken, but did not?
I should have taken the advice to know the music business a bit better. I was more sort focused on creating and all the fun parts — the business part is kind boring. But I was a kid so I didn’t think that it would be as valuable to know the inner-workings the business.

What was the first LP/cassette/CD/eight track you ever bought with your own money?
This is going to sound really weird but it was actually a rap cassette, because my friend whose mom babysat me listened to rap and she told me I needed to listen to this cassette. So, I bought a cassette by Big Daddy Kane. My dad found it and got really angry because there was swearing and vulgar language and I was really young — maybe, like ten or something.

What was your most memorable day job?
I worked at a photo lab. I had great bosses who treated me really well — they let me do studio portrait photography. I thought it was just cool to see people’s vacation pictures places that I have never been to. Also, some people were pretty artsy with their own photography skills. Every once in a while you’d see somebody dressed up as KISS, but naked.

How do you spoil yourself?
I like to go to flea markets and buy myself presents. I like to look for treasures; usually it’s jewellery or clothes.

If I wasn’t playing music I would be…
Either be an air crash investigator or a storm chaser.

What do you fear most?
Worms. I don’t like worms, I have a worm phobia. Spiders are a close second, but I think I would prefer a spider crawling on me to a worm.

What makes you want to take it f and get it on?
I’m married, so my husband gets me going.

What has been your strangest celebrity encounter?
Rachel McAdams came to one my shows in L.A. one time and I mean it was awesome, but I was totally an idiot because I am a huge fan her and I couldn’t speak properly when I was trying to talk to her. So, I just ended up stuttering and being an idiot.

Who would be your ideal dinner guest, living or dead, and what would you serve them?
I would like to have some Mexican food with Frida Kahlo, the painter. I think she’d be really interesting, and I think she would know what kind good Mexican food we could have.

What does your mom wish you were doing instead?
I think she’s happy that I am doing music. She wanted me to got to university and get a degree, just as a backup in case things didn’t work out, and I did that. But, she never tried to prescribe any sort career to me. She always just let me follow my own path and do what I want to do.

What song would you like to have played at your funeral?
“Dark Was the Night, Cold Was the Ground” by Blind Willie Johnson.

Liberty will be independently released on March 30.