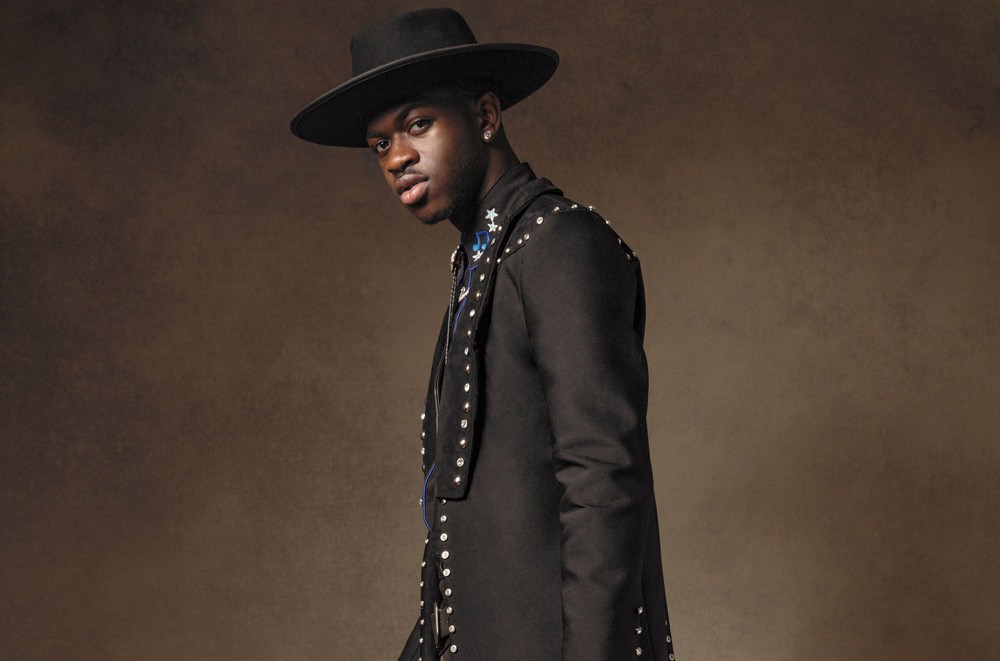 After a whirlwind, record-breaking 2019, Lil Nas X is continuing his cultural dominance right at the start of the new decade. The rapper kicked off 2020 by scoring his first Grammy wins: best music video and best pop duo/group performance for "Old Town Road" alongside Billy Ray Cyrus.

He celebrated his first time at the ceremony with an epic performance that included Cyrus, BTS, Mason Ramsey, Diplo and Nas.

Now, Lil Nas X is raising the stakes even higher with his first-ever Doritos Cool Ranch Super Bowl commercial, which will air during the game’s third quarter on Sunday (Feb. 2). It finds the artist rolling up to a saloon where he runs into veteran film actor (and frequent Western star) Sam Elliott. But instead of your typical cowboy stand-off, the pair challenge each other to an energetic dance battle.

Towards the end, buddy Billy Ray Cyrus pops up to make it clear he won't be participating! The fun commercial follows Doritos' collaboration with Post Malone for the new Flamin’ Hot Limon chips.

"Cool Ranch and the Spicy Nacho are some of my favorite bags of chips," Lil Nas X tells Billboard. "I love Doritos and they were the premium chips for everybody."

Below, the viral rapper shares his experience working with Doritos, his love for fashion (and cowboy hats) and reveals the advice that Nas bestowed onto him following their surprise "Rodeo" remix.

When I was growing up, there was always the Cool Ranch vs. Nacho Cheese debate at school. Did you have them in your lunch box?

Nah, I didn't have a lunch box! I got that free reduced lunch. It was pretty good though, I enjoyed it.

How did this campaign for Cool Ranch come together?

They were like, "Nas we love you so much! Please, please we need you!" No, I'm joking. [Laughs.] They gave me the opportunity to do the commercial and it was an immediate yes, pretty much. Having a Super Bowl commercial still hasn't sunk in. But it's such a huge thing, especially for me being such a new artist — or any artist or actor whatsoever. Being in this commercial is dope. I had so much fun shooting and I got to meet Sam, which was pretty cool.

Did you teach him any dance moves on set?

We talked a little bit on set, and he told me that I'm carrying the torch and a lot of other nice things. He's another one of those guys who will tell you to keep going and keep pushing. He taught me how to roll my mustache. Ready? [proceeds to move his upper lip] Did it happen? You saw it, you have to put that in there! [Laughs.]

After going viral on TikTok, making chart history on the Hot 100 and winning two Grammys, this has to be such a full-circle moment for you.

I'm trying to come up with words other than "amazing" and "incredible," because I'm tired of using those. But it feels like a dream come true!

I liked that you gave us a little nod during the Grammys performance with your September '19 Billboard cover.

I just wanted to put some of my favorite covers up there. And it was kind of out of place, in a way that it was supposed to [represent] the past. It was nothing crazy.

You tapped Nas for the surprise "Rodeo" remix — that is pretty epic.

It came together maybe a month and a half ago, but it was something I've been sitting on for a little bit. I thought it would be its own moment for hip-hop. Just to have that whole [idea] of "Nas doesn't like Lil Nas" perish. It was dope of him to hop on the song. The best advice he told me was to "keep your foot on their necks."

I thought you were the best dressed of the night. How has fashion become an extension of your persona?

When I first started, it wasn't that big of a deal to me. Mainly because I couldn't afford it. But slowly it became a big part of my brand and will become bigger as more people start to take notice. I feel like it's another great way to express yourself — and it's another one of those things that make an icon, you know? I'm not really a person who likes a specific designer. I like specific styles or ways that something is made — not a line of things.

How many hats do you own, by the way?

Probably hundreds. This is definitely one of my favorites. [Points to black cowboy hat emblazoned with a ram head and crystal-studded flames.] I wore this one during my performance at the Grammys.

What else do you have up your sleeve for the rest of the year?

I hope to have my album finished by this year, and have it out this year. I also want to have a lot of new music videos come out.