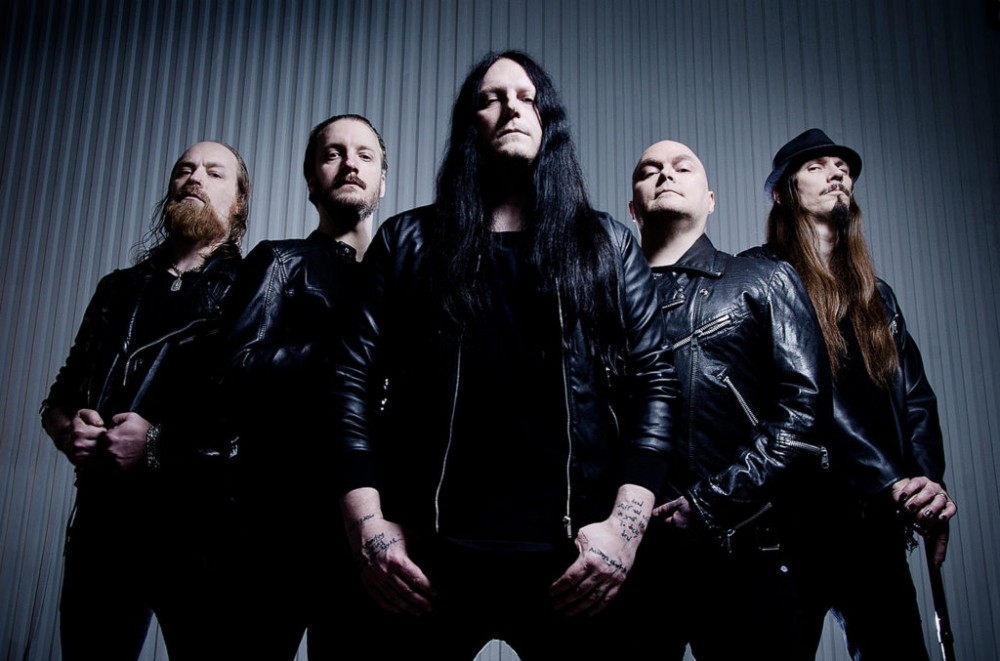 The band will give a live streaming performance on May 9 from Sweden's Studio Grondahl.

“You have to look for the bright side if you can.”

Given the melancholic and intensely passionate sound of progressive doom act Katatonia, that sentiment isn’t something listeners would expect to hear in relation to the band. But despite the haunting lyrics and atmospherics the quintet is renowned for, singer-composer Jonas Renkse isn’t dour as he chats via phone from Sweden about the possible upside to releasing new album City Burials (which arrived April 24 on Peaceville Records) while many people are hunkered down during the coronavirus pandemic.

“I hope that gives them time to indulge and sort of get the album vibe maybe sooner than if they had a normal life going on,” he explains. “So I hope for some advantages, at least, seeing how the situation is.”

The frontman’s gratitude extends to the time he’s getting to spend with his family, for despite a break Katatonia announced in 2017 to mentally regroup, the Swedish band often has been away from its loved ones during its nearly 30-year career. However, being confined with his wife and three children is “full-on,” he jokes with a soft laugh. “I could do with some more isolation, probably, but it’s nice.” He’s also enjoying red wine “a bit more than usual, because it’s a nice little thing to end your evening with.”

Renkse will get a change of scenery on May 9 when Katatonia gives a live streaming performance from Sweden’s Studio Grondahl to premiere three songs from City Burials, another entry in the band’s catalog that juxtaposes Renkse’s elegant crooning against fervent, dramatic textures. The last time Katatonia performed was in Athens in February before events like Prognosis Festival being postponed and growing concern about the spread of COV-19 forced the band off the road.

“In Sweden, the restrictions aren’t as severe as in other countries,” guitarist Anders Nystrom says in a statement about the streaming show. “We can gather for rehearsals — of course still keeping as much distance as we can. Same thing with the performance. It will be performed in a recording studio, so sound engineering will be very good.” (Tickets can be bought here, and purchasers can rewatch the stream for 30 days.)

Sweden’s government has been criticized for not enacting a lockdown to help slow the virus’ spread. However, businesses like restaurants and bars remain open because the state feels citizens will adhere to social distancing. There’s a certain level of trust between the country’s government and people, meaning such directives are more likely to be followed. “It’s like we have the social distancing already in our DNA,” says Renkse. (Regardless, he’s decided himself to stay in as much as possible: “I don’t see a reason really to go out there and either get the flu or, if I already have it, to pass it to someone else.”)

Katatonia started recording City Burials once the band finished a 2019 European tour celebrating the 10-year anniversary of 2009’s Night Is the New Day. When they started rehearsing for that run, “we realized, ‘Well, this is not so bad,’” recalls Renkse. “We think it’s fun to be together playing music, so I think once we were on that specific tour and when the tour was over, [we felt], ‘Let’s do another album.’ It wasn’t very dramatic. It just was a very natural process, I think, to get back together.”

He adds that there weren’t any hard feelings among band members (which also include guitarist Roger Ojersson, bassist Niklas Sandin and drummer Daniel Moilanen), who had kept in touch during the hiatus. Renkse also wrote music the entire time before Katatonia started recording last October. “I just kept on trying to be as creative as I could, and here we are now with a new album coming out, so it was a very smooth transition,” he says.

Putting together City Burials might have been simple, but it arrives in an era of uncertainty and chaos, topics that make Katatonia tick. The snappy percussive beats and defiant guitar of latest single “The Winter of Our Passing” (similar to “Lethean” from 2012 album Dead End Kings) belie its disconsolate message about “the letting go of what once was of great importance, now reduced to just another loss,” according to a press release — an apt sentiment as people mourn their former way of life.

Katatonia views City Burials as a new chapter of the Dead End Kings, which was praised for its layered production, heart-wrenching emotion and masterful performance. The band is fond of the phrase, “A dead end and a king; they’re very contradicting things,” says Renkse with a laugh. But he can’t describe exactly what it means: “Maybe someone that doesn’t really care about being on top of everything all the time and can find nice things in the little details.”

The new record upholds Katatonia’s tradition “of mixing up the albums pretty much. We got the more atmospheric stuff, and we have the more heavy stuff,” observes Renkse. “[This album is] a little bit more on the heavy side again. I like the eclectic mix of light and shade and mellow and dark.”

For instance, the propulsive “Behind the Blood,” inspired “by the ’80s heavy metal stuff that we grew up with” like Judas Priest, is a total contrast with the gently plucked sound of a nyckelharpa (a traditional Swedish instrument) that drifts through the refined gloom of first single “Lacquer.” Renkse commented in a previous interview that the latter song is one of the best that he has ever written.

“It was a lucky shot for me,” he says with another laugh. “It just fell into place in a very, very nice way for me. I’m not sure exactly what it is, but it has a certain quality that I’m very happy with, with everything from chord progressions to vocal lines to lyrics.” He’s not sure yet what the song’s message is, either. “I usually don’t really get my own lyrics until six months after the album’s released, when we start to rehearse or play live.” He hedges the track is “probably saying something like, ‘Everything is not gold that glimmers. The lacquer, it’s just something that’s on the surface. Underneath, it can be something else.’ ”

The polished “Lacquer” is a far cry from the rustic doom/death metal that Katatonia debuted with on 1993’s Dance of December Souls. Renkse has no definite answer as to why the group’s sound has evolved into a progressive style. But he surmises, “For a band like us, I think we’re sort of destined to expand our universe and try to find new ways of portraying the music that we want to create. We’re still very faithful to the foundation of what we started when we started the band. We wanted to make melancholy music. That was the main plan, and I think we still do that.”