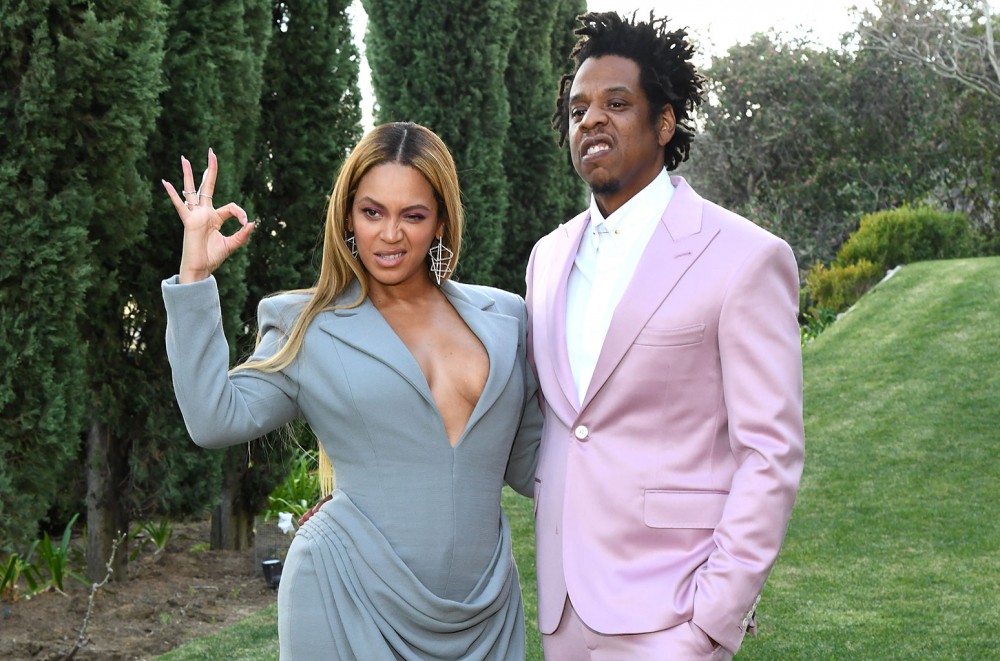 When it comes to the Roc Nation Brunch, the central theme for the illustrious event is black excellence. On Saturday (Jan. 25), Jay-Z and Beyonce's reign as supreme hosts continued as they entertained the likes of Rihanna, Diddy, Meek Mill, Megan Thee Stallion, Lana Del Rey, Jonas Brothers and more for their starry event.

For many, the sleek mansion party has become a pre-Grammy staple in the hip-hop community since its inception — and Saturday showcased the brunch's elite star power.

After last year's shaky forecast looked to play the role of spoiler, this year, the weather proved to be resilient. As early as 11 a.m., party-goers were patiently waiting inside of UCLA's parking lot to be escorted to the event. Despite the beaming sun, music talks, banter, and constant camera flickering deflected any worries about the heat. By noon, a fleet of black shuttle buses came and loaded up the passengers. After funneling through the affluent streets of Beverly Hills for 40 minutes, party-goers arrived at an elegant mansion towering over the city.

Upon entry, glasses of Ace of Spade greeted attendees, courtesy of several waitresses. As you walked inside the mansion, a long hallway adorned with framed photos of Jay-Z, Nipsey Hussle, and Diddy from last year's soiree injected blissful memories for those previously in attendance. Inside, food options were plentiful, with the favorites being the D'usse infused Spanish chocolate churros and the mini waffles. For those interested in taking home some prized memorabilia, PUMA hooked people up with customized slide-slippers.

This year, an abundance of celebrities outside of the hip-hop spectrum voyaged to this year's brunch, including Lana Del Rey and the Jonas Brothers.  Even sports stars were in the mix, including Los Angeles Rams star Todd Gurley and retired NBA all-star Zach Randolph. REFORM leaders, New England Patriots owner Robert Kraft, along with Philadelphia 76ers co-owner Michael Rubin, were also in the fold.

After flawlessly pulling up with a baby blue two-piece FRÈRE suit in 2019, Jay-Z kept his winning streak intact with his mauve-colored attire. His wife, Beyonce, arrived two hours later in a blue-mini dress designed by Francesco Murano. The power couple partook in a pseudo photo shoot, where they traded smiles and scowls throughout their shots. Rihanna's late entrance was a show-stealing moment, as well. After skipping out on last year's brunch, RiRi was radiant, glowing in her gold Bottega Veneta ensemble.

The highlight of the night came when Kevin Hart delivered an inspirational speech for the men in the room. Before issuing a toast, Hart dished out several gems for those seeking enlightenment.

"The question of the day is, how do you want your book to end," Hart posed. "I'm around a bunch of men that are doing amazing things in their life. Basically, you're writing chapters. Chapters get good; they get better. Some get worse. It's your job to complete that book to the best of your abilities. My question today is, are you focused on the ending of your book? And if so, how great do you want to be?"

It's safe to say, despite the muddiness surrounding the Grammy Awards on Sunday (Jan. 26), the Roc Nation Brunch once again left a savory taste in the mouth of everyone in attendance.