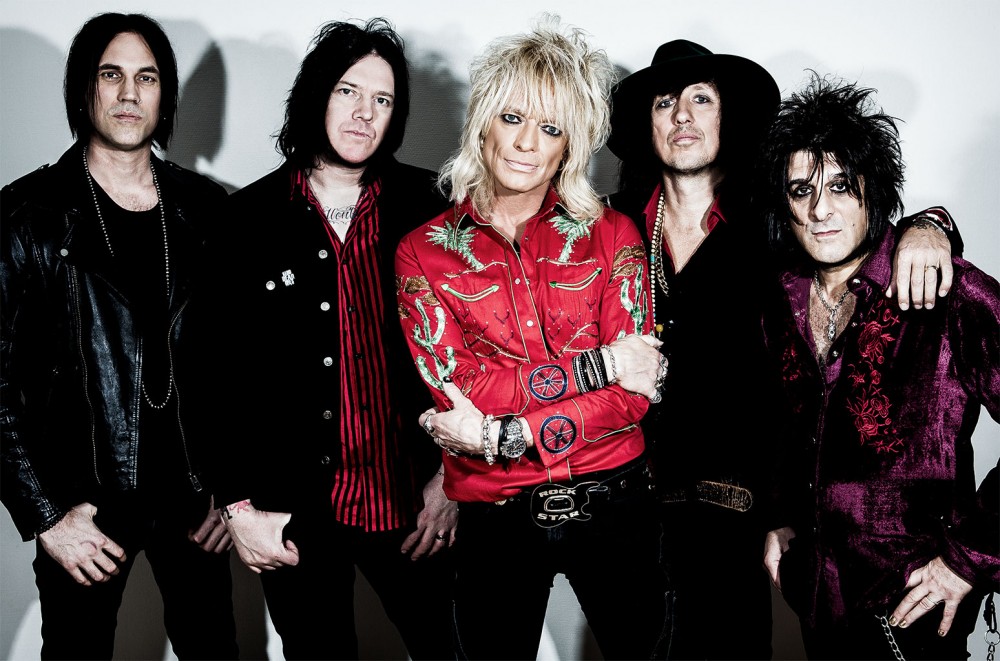 “Playing music is not [done] for the adoration or the riches,” says Monroe, who wants to tour the U.S. “as soon as possible.”

Michael Monroe’s music always has walked gracefully between genres: one part punk, one part glam. The former singer of Finland’s Hanoi Rocks has been a hugely influential artist in the rock scene, and not just in his native land. Jyrki 69, lead singer of fellow Finns The 69 Eyes, cites him as a major inspiration, which was most evident during the hair-metal era of the ’80s.

Monroe and Hanoi Rocks “changed every rocker’s lives in Finland and, later on, in the L.A. scene,” declares Jyrki. “They were very popular among teenage girls here, so everybody had dyed and back-combed hair, looking like them. Even the guys. Then all of a sudden, it was such a surprise to see all these L.A. bands coming up looking like Hanoi Rocks in the rock clubs and bars of Helsinki.”

Jyrki further posits that the man and band “belong in the top five of dangerous and influential rock’n’roll bands, along with The Rolling Stones, The New York Dolls, MC5 and The Stooges.” Guns N’ Roses paid tribute in 1989 when it rereleased Hanoi Rocks’ catalog on GNR’s vanity label, Uzi Suicide/Geffen. But Hanoi Rocks sadly never achieved the level of the success as other bands it had influenced, disbanding not long after drummer Nicholas “Razzle” Dingley was killed in a 1984 accident while he was a passenger in Motley Crue singer Vince Neil’s car. (Two people in the other vehicle suffered grave injuries. Neil pleaded guilty to charges of vehicular manslaughter and drunk driving.)

Monroe carried on with a solo career, starting with 1987’s Nights Are So Long. (He also resurrected Hanoi Rocks from 2002-2009.) Until the October 2019 release of his latest album, One Man Gang (Silver Lining Music), it had been about four years since his last album, Blackout States, due to Monrow changing up his management, label and booking agent. But his ninth solo studio effort is well worth the wait: along with his band — guitarists Steve Conte and Rich Jones, drummer Karl “Rockfist” Rosqvist and longtime collaborator/bassist Sami Yaffa, another Hanoi Rocks alumnus — Monroe has delivered one of his best albums, from the insanely catchy title track to the contagious “Last Train to Tokyo."

The album rocks, says Monroe, because the band does. “The band is called Michael Monroe, but we’re still a band of guys, so I thought it was appropriate to call it One Man Gang,” he explains. “We all share the same kind of view on life and like the same kind of music. Everybody writes and contributes in this gang. Sami is my blood brother and a friend of mine for years, and he writes great riffs; Steve and Rich write great songs and lyrics. And Karl — it’s funny, because when we found him in L.A., we had no idea he was born in Finland — was just a perfect fit.”

It also has songs about cities that inspire Monroe: “Hollywood Paranoia” checks “so-called VIP rock bars and people doing coke and drinking cheap champagne and thinking they’re living some kind of high life. But,” Monroe says, laughing, “it’s mostly about paranoid people doing blow.” “Helsinki Shakedown,” which was written in a hotel in that town, is about touring, the downtime between shows and lobby calls, and how to fill that space. “Last Train to Tokyo” is a tribute to Japan, and what it's like to visit while “really jet-lagged and tired and you’re only there for about a week or so, and you’re feeling exhausted and overwhelmed by the whole thing,” he says.

One of his favorite cuts is the title track, which he admits “is mostly about me. I sing, ‘I ain’t walkin’ on water, but I know a trick or two,’ which means, ‘Well, I ain’t perfect, but I’ve got a trick or two up my sleeve.’ Then there’s the line ‘Everybody’s pissin’ on their own parade,’ which is about how people often behave or vote against their own self-interest, like with Brexit, and to remind them about PMA — positive mental attitude — to make their own life better.”

Another autobiographical piece, “The Pitfalls of Being an Outsider,” is “a piss-take on all the hip-hop songs about money and cars and champagne. The theme of the song is that we do this whether or not we have those things. We’re not looking for approval. Playing music is not something you do for the adoration or the riches. It comes from the heart … It’s also a nod to Bon Scott and AC/DC’s ‘It’s a Long Way to the Top (If You Wanna Rock ’n’ Roll),’ basically saying you’d better be doing it for the right reasons because it can all fall apart at any time.”

Monroe completed a brief U.K. tour last fall and resumes touring Europe on Feb. 14 in Vantaa, Finland. He would love to hit the United States, but he hasn’t played here since 2016 because it’s too expensive unless his band is paired as a support act with a group that’s doing a stadium run. “We can’t afford to at this point,” he says. “Unless you get on a really big tour, [then] playing in clubs for a couple of hundred people in the Midwest, it’s like no one’s ever going to notice.”

March 6: On the [email protected]

May 30: Call of the Wild [email protected], England