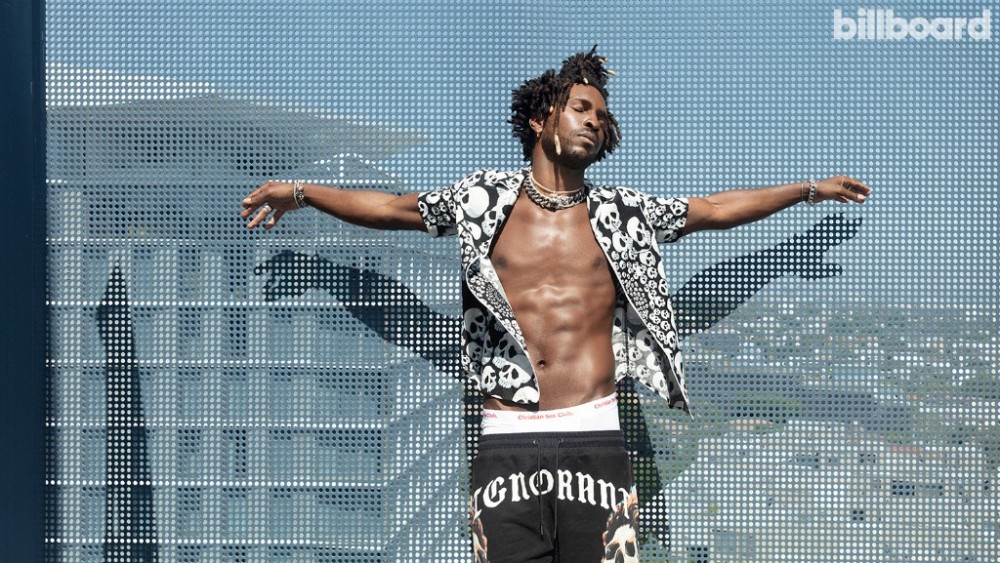 The Guyanese-American singer-songwriter is currently soaring up the Hot 100 thanks to a remix of his song “Roses” — but it took a shift of perspective for him to get there.

Long before SAINt JHN’s “Roses” was blaring out of speakers across the world, he was bouncing back and forth between his hometown Brooklyn and Guyana, a small country off the North Atlantic coast of South America. From birth until his second year of high school, he’d rotate between the two locations in three-year stints and draw inspiration from the disparate cultures around him, counting everyone from JAY-Z, Fabolous and Beanie Sigel to Beenie Man, Spragga Benz and Buju Banton as early musical influences.

But the person who made him believe a career in music was possible was his biggest hero: his older brother. At age 11, while walking home on Furman Avenue in Bushwick, SAINt JHN remembers seeing him surrounded by a crowd and leading a rap cypher. “He felt like a puppet master — whatever he did, he controlled the audience,” SAINt JHN recalls. “The crowd would go, ‘Oooh. Owww. Ping! Zap!’ It was like a f–king Batman comic book, and he was writing it.”

SAINt JHN is now experiencing his first self-described “feverish” hit with Imanbek’s bass-bumping remix of his 2016 single “Roses.” The song has gone No. 1 in several countries across the globe and currently resides atop Billboard’s Hot Dance/Electronic Songs chart for the third consecutive week, as well as at No. 23 on the Billboard Hot 100 (a spot removed from its peak last week). But it took more than a decade for the singer-songwriter to obtain the breakthrough he’d long been pursuing.

For many years after watching his brother, the now 33-year-old SAINt JHN honed his rapping skills — he admits to stealing some of his own brother’s lyrics back then to impress his peers — while simultaneously working to create a brand for himself. In 2010, he made his official foray into the industry, dropping two projects under his birth name Carlos St. John while living rent-free on a friend’s couch in Harlem. Both releases were recorded at a collaborator’s spot in Queens, so that he could save on the usual $25-30 hourly studio rate.

At the same time, he created a fake public relations agency called Taylor Foor PR to make his work seem more official, which led to some blog recognition. “Taylor Foor sounded college-educated and gender ambiguous,” he says with a laugh. “It sounded like someone you should respond to. And it worked.”

After the fake agency “added” his studio collaborator, Azeem, to the team’s roster in 2011, SAINt JHN wrote a chorus and delivered a guest verse on a song called “Hurricanes and Tornadoes.” Former BMG president of U.S. repertoire Zach Katz discovered the track online seven hours after it was posted and asked to meet the two in Los Angeles to talk about songwriting.

“He says to me, ‘Do you want to rap or do you want to make a million dollars?’” SAINt JHN remembers. “That changed everything for me. It was the first time somebody was reaching out to me and was interested in something that I could contribute.”

For the next two months, SAINt JHN and Azeem recorded in the latter’s cousin’s garage in West Covina, paying more than $35 for a daily car rental to drive the roughly 20 miles into L.A. in hopes of landing their breakthrough hit. Though he tried to write records for Rihanna, nothing stuck, and SAINt JHN moved back to New York more determined than dejected.

“They tell you that one song will change your life in songwriting, and we believed it at the time,” he says. “They give you that carrot on a stick. We were just trying to get there.”

Over the next five years, SAINt JHN tallied a number of credits: he co-wrote Hoodie Allen’s 2012 breakout hit, “No Interruption”; helped pen a handful of tracks on Kiesza’s major label debut record in 2014; and assisted in writing and producing the falsetto-heavy “Crash” from Usher’s Hard II Love in 2016. But that career-defining hit still eluded him.

During this period, SAINt JHN began working without Azeem and started to sing all of the hooks on his own demos. He was still picking up more than his fair share of rejections — potential suitors continually told him that his narrative was too deeply embedded in his ideas for other artists to use for themselves.

“For the first year of hearing that, it was the most depressing thing — I tried to be as generic as I possibly could and take my perspective away, but I just couldn’t,” he notes. “I can only create from the vantage point that I have. I didn’t realize that meant that I had my own identity.”

The tides started to turn for SAINt JHN in 2015, after he heard that Beyoncé was looking for tracks for her next project. He put together a mostly lyric-less outline of what would eventually become the bell-tolling, no-nonsense original version of “Roses.” After shopping the song didn’t bear any fruit, he dropped it himself the following July and paired the track with a bone-chilling music video inspired by turn of the century Hungarian film Werckmeister Harmonies that October. The track later appeared on his debut album, Collection One, which arrived in 2018.

“Roses” didn’t pull huge numbers stateside but accrued a sizable following in eastern Europe. A week after releasing sophomore album Ghetto Lenny’s Love Songs last August, he performed at a sold-out club in Moscow; after the show, his team introduced him to Imanbek’s manager, who played him the uptempo, pitch-inflected remix for the first time.

The remix’s explosion is thanks in large part to its massive TikTok presence, serving as the backing music in more than 2.7 million videos to date, including multiple entries from the platform’s biggest star, Charli D’Amelio. The takeoff has led to a huge wave of new fans for SAINt JHN, and while he’ll have to wait to see them in person given the COVID-19-related cancellation of his IGNORANt Forever tour, he’s looking forward to see how much of his material that his new audience knows.

“They may not have heard Collection One or Ghetto Lenny’s Love Songs,” he says. “That’s going to be the ultimate test for me, and I’m excited because I’ll know right away. And either way, I’m willing to do the work.”

In addition to signing to Roc-a-Fella Records co-founder Kareem “Biggs” Burke’s management company last year — a move that pulled the esteemed executive out of retirement — SAINt JHN is working on Collection Two, which is currently without a release date, though he notes he could “probably put it out today” if he wanted.

“You’re going to see a lot more hits,” he emphasizes. “Big, great, incredible songs that change culture. Everything I do is going to be a subsequent to that.”