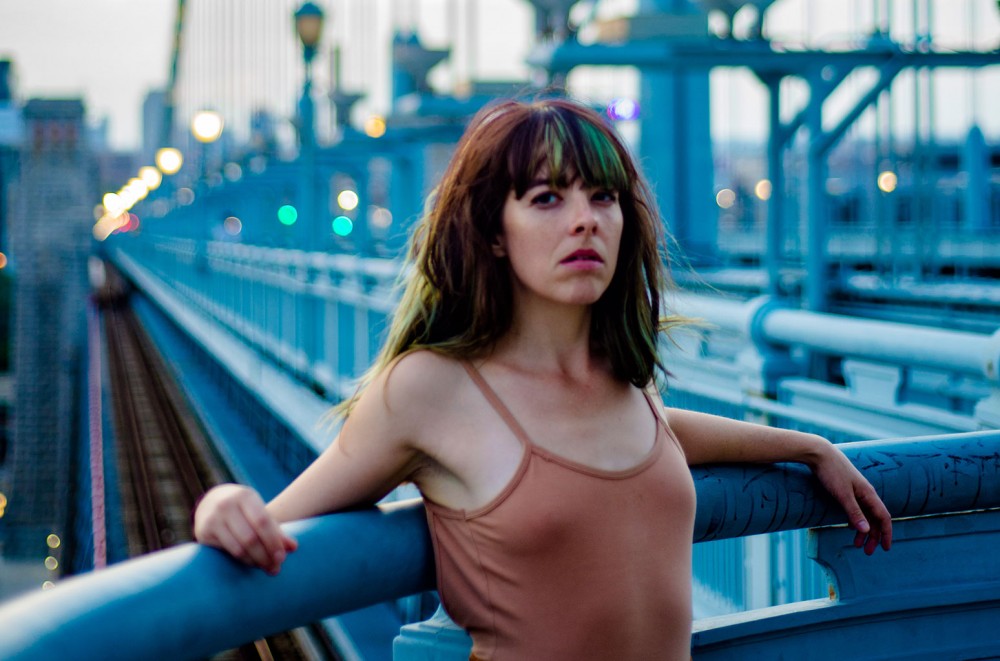 Frances Quinlan has been the frontwoman of Hop Along for nearly half her life, and has created the album art for the band throughout its entire career. On Wednesday night (Jan. 29), she celebrated a collection of her own visual artwork for the first time with a gallery opening at Selina in NYC’s Chelsea neighborhood. The singer-songwriter had also been gearing up to release Likewise, her debut album under her own name.

While her artwork is separate from her music, the evening was still revealing of Quinlan’s creative focus. She offered plenty of wisdom during the Q&A, after guests had a chance to view the pieces — abstract paintings which mostly reflected landscapes she’d seen while on the road with her band — but also tended to go off on fascinating, hilarious tangents. When asked about her own process, for instance, she quickly spiraled into a passionate thought about Donald Duck and Charlie Brown.

The Philadelphia-based singer-songwriter consumes a lot of popular culture while citing artists like Björk, Joanna Newsom and Bob Dylan as musical inspirations. Quinlan’s mother encouraged her creative side when she was 10 years old, long before she went on to study visual art at Maryland Institute College of Art. It was around that time that she’d debut her solo album, Freshman Year, under the name Hop Along, Queen Ansleis, before chopping the name in half, adding band members Joe Reinhart, Tyler Long and her brother Mark, and going on to release three acclaimed albums.

Now Quinlan is releasing her debut solo album, and the songs sound like how her paintings look: colorful, fun, curious. On tracks like “Rare Thing” and “Now That I’m Back,” she chooses to pull back on the guitars, utilizing new instruments like synthesizers, harps and strings. “[The guitar is] just a tool for songwriting,” Quinlan says. “So knowing I’d be going into a studio like The Headroom in Philadelphia that has the resources and gear, I mean, why not be adventurous and see what’s possible? I knew going in that I didn’t want to just record me on a guitar singing.”

The record brings back several longtime collaborators and was co-produced, engineered and mixed by Reinhart, which gave Quinlan more freedom to mess around in the studio. “It’s really gratifying to just get lost and explore together,” she says. Mary Lattimore, a frequent Hop Along collaborator, was also brought in to work on the record along with the rest of the bandmates.

Billboard sat down with Quinlan in New York before the gallery opening to talk about the new record. The singer is also gearing up to head out on the road, dates can be found here.

Hop Along’s latest record, Bark Your Head Off, Dog, was released in 2018. Why did you decide to go solo now?

Two of the songs from Likewise, “A Secret” and “Went To LA,” were initially recorded for Bark Your Head Off, Dog in 2017. However, I started writing those songs in 2013, so they were very old. I’ve written songs that the band collaborates on and arranges and edits together but then there’s always one or two songs that really, in their first form, feel pretty complete. Songs like “Happy To See Me” and “Some Grace” are two examples of that. Aside from the addition of one more guitar or harp, the songs feel pretty complete in their initial forms.

So once we realized that BYHOD was going to be too long — with all 11 songs on it — I talked to the band, and everyone was cool with the idea of me taking two songs that were pretty much solo anyway. Tyler Long plays bass and piano on “A Secret,” and Joe Reinhart plays slide guitar on “Went To LA,” but otherwise, they stayed really close to the forms I brought in to the studio anyway. Then I wanted to try recording a few more songs where I just took a written piece right to the studio and we worked on it there and finished it there. That’s what Joe and I did.

Why did you decide to work with Reinhart again?

This marks year 10 of working with Joe at Headroom [Studios]. It was initially in a warehouse years ago and Joe and I had started working on Get Disowned in 2010. He is just an absolute blast to work with. We go down rabbit holes and try things and fail but then also he’ll follow me on these ideas and I’ll follow him and one of us will be right. It’s really gratifying to just get lost and explore together. Working with all of my bandmates has been one of the most rewarding experiences of my life, and Joe also just happens to be this incredible producer/engineer/mixer, so I am incredibly lucky.

The whole album is cohesive but it also sounds kind of chaotic, in a good way.

I love that, thank you. I love chaos… In songwriting, not much elsewhere. I’m a Taurus, so I actually love security and creature comforts [laughs].

For Hop Along, we’ll do a number of demos. We get together many times and there are recordings upon recordings — mostly done on people’s phones — and then there will be a demo finally. But for Likewise, there was one demo and they were all phone recordings that I sent to Joe. All of the guitar and vocals were written, so the structure was there, and then brought it to the studio and from there we played around and experimented. Joe would mess with Ableton and bring a beat in or he would play bass or drums or he would say, “We need someone who’s really proficient at drums,” so then we would call Mark. Or if we needed someone who was proficient at bass we’d call Tyler.

We got strings from Molly Germer, who plays with (Sandy) Alex G and Japanese Breakfast and Whitney as well. She is an incredible violinist and has got great instincts for nonclassical projects. I’ve learned over the years how hard it is to communicate to strings. I don’t know music theory so it’s already kind of a struggle for me to explain through more abstract terms, and with strings, there are even more terms that I had no idea that apply just to strings, so Molly interpreted my garble into actual arranged playing and it’s beautiful. And Mary Lattimore, of course, who has played with Hop Along on record a couple of times, also plays on Likewise and as always, she’s brilliant.

There’s no difference for me in the writing — it’s the editing and arranging that’s different. There’s less because it’s just me. It’s not that compelling of an answer but truly, Hop Along is four people and this is me.

And what are the differences in terms of indie budget logistics? In the recording process, but also when you’re touring and promoting?

For recording, it just depends on how ambitious you want the recording to be. That can vary. I’m sure there are solo artists with crazy bigger budgets than me for their records — I think that also depends on the size of the project and this is a brand-new project. In a couple of years, I’ll have been in Hop Along for half my life. I’ve slept on cat hair-covered floors in Hop Along and also in the van in the sweltering heat. Touring in 2009 was immensely different from touring in 2019, just as that band.

At the moment for the solo project, my goal right now is to be able to combine travel with touring and in that case, I have to be more mindful of the hiring of staff, because you’re asking people to give up their time for your project. If they’re doing that, then you probably want to be a little more like, “Let’s go, we’re working,” but if I’m the only one working, then I can maybe waste time in a few cities, hang out, see some things.

Which artists did you reference as inspiration?

One artist I’m always hoping to reference is Van Morrison, especially his album Astral Weeks. The fact that it’s a record that takes you to a definite space — to me, anyway — I really tend to turn off other things when that album is playing. Nick Drake, I would say the song “Hazy Jane II” definitely influenced “Your Reply.” Björk, always. She’s a genius, we played a number of her songs. There were a few more we were tossing around, and I’m always listening to Joni Mitchell.

Why did you decide to close the project with a cover of Built to Spill’s “Carry The Zero”?

That was a later decision. The album was initially going to end with “Piltdown Man,” but then it might have been my cousin who suggested I swap it. I had some help with the track listing, for sure. I really want the album to be listened to from beginning to end and I think it was a good call to put “Piltdown Man” first. Then instead of ending on that sadder, more nostalgic note, I liked the idea of ending on a more joyous note.

You’ve also been incorporating your visual art on this project once again. How do you make sure they go hand-in-hand?

I’ve been doing the artwork for Hop Along from Freshman Year onwards. Maybe it has a little bit to do with having the need to control the overall aesthetic. I do think the cover of a record, in a way, is a doorway. I mean, that cover of that King Crimson record, that’s the character of that album. In general, for solo records, it’s almost a rule that you have a photo of the artist on the cover and that just didn’t sit right with me. A cool and collectedness is supposed to come through, I noticed that a lot, so I figured a good compromise would be to do a drawn portrait. One big influence was Joni Mitchell’s Clouds. That cover has her portrait right straight on and she looks like an oracle, like she knows everything. I certainly don’t feel that way about myself so I thought I should look a little scared instead [laughs]. A little nervous. Not horrified, just ill at ease, let’s say.

You’ve said in the past your mom told you that you were capable of pursuing a career in the arts at a really young age.

I cannot stress enough how imperative it is to encourage children, even if they stink. I wasn’t good, I’ve seen my drawings from when I was little and despite my mom’s strong opinions, I think they look like a kid’s drawing. I’m not going to get down on myself, but they certainly weren’t those of a prodigy by any means. She told me, “You are an artist.” She didn’t try to turn me into a prodigy, she just encouraged me and I was very lucky to get that.

Then, later on, this art teacher I had in high school, Ms. Wagner, was my mentor. She was the first person to tell me that it could be a career, that I could make a living as an artist if I pushed. Certainly, I’ve had some bad teachers, but the great ones changed my life and Ms. Wagner was one of them.